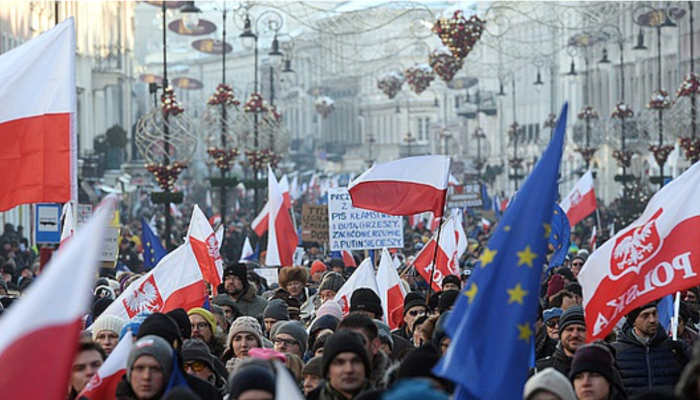 Despite the freezing cold weather, many thousands of Poles demonstrated in Warsaw and thirty other Polish cities on Saturday.  They believe their freedom is threatened by the conservative government elected in October.  Former Polish president Lech Wałęsa also spoke.

“We want to protect democracy and freedom,” said Mateusz Kijowski, the founder of the Democratic Protection Committee (KOD) civil organization.  KOD came to life spontaneously last autumn in protest against controversial steps taken by Jaroslaw Kaczynski’s Law and Justice Party (Pis).  Since then many such demonstrations have taken place.

In Warsaw alone many thousands assembled before the Office of the Prime Minister on Saturday.  From there they walked to the president’s palace.  The demonstrators carried Polish and EU flags, and banners reading “We say no to being Putinized!” and “Kaczynski, go to Hungary!”.  Yet another banner read, “I love the EU, including Germany!”.

“I remember the period of communism and I don’t want a repeat of that, even though all of this is starting to remind me of it,” said one protester to a French media outlet.

Reuters reports that Hungarian opposition activists are among those participating in the Warsaw demonstrations, including the organizer of last year’s demonstration against the dreaded internet tax, Balázs Gulyás.

“Jaroslaw Kaczynski wants to follow Viktor Orbán,” said the Hungarian civil activist. “Just as it happened to us, we Hungarians need to warn you that whatever Kaczynski says, the road leads to autocracy, economic stagnation, the collapse of the middle class and growing poverty.”

The very embodiment of Polish democracy, Lech Wałęsa, told the crowd: “(w)e have worked hard to win our freedom.  Now they are emasculating it.  The world is watching you, and the fact that we do not know what to do with democracy.”

The Nobel Prize-winning politician reportedly repeated what he said after parliament adopted the law pertaining to the constitutional court:  “Everyone knows they violated the constitution.  And yet they do it in an unabashed manner and deny it while looking us in the face.  We cannot weaken our constitution.”

The supreme court, the liberal opposition, many legal and civil organizations, including Amnesty International and the Helsinki Committee, all believe that the new law completely paralyzes the constitutional court, reports napi.hu.  PiS responds to critics by claiming that they only seek to remove obstacles from the road of reform.

Worries over events surrounding the Polish constitutional court and the public media caused the European Commission to initiate a preliminary proceeding against Poland last week within the framework of the European Union rule of law mechanism.  The European Parliament is scheduled to debate the matter on Tuesday in Strasbourg.

At this week’s plenary session Polish Prime Minister Beata Szydio rejected accusations that PiS had violated the principles of the rule of law, and insisted the government would respect the constitution, as well as the European rules and convenants.

“I haven’t heard such a lie my entire life,” said Wałęsa, adding that “the judges, lawyers, and everyone else say:  ‘You lied, you deceived the majority’.”  He announced at the end of December that Polish democracy was in danger, and called for a referendum in the interest of compelling PiS to hold elections earlier, to which there was little response.

Walesa reportedly warned that if PiS does not change its careless politics, Poland could descend into civil war.