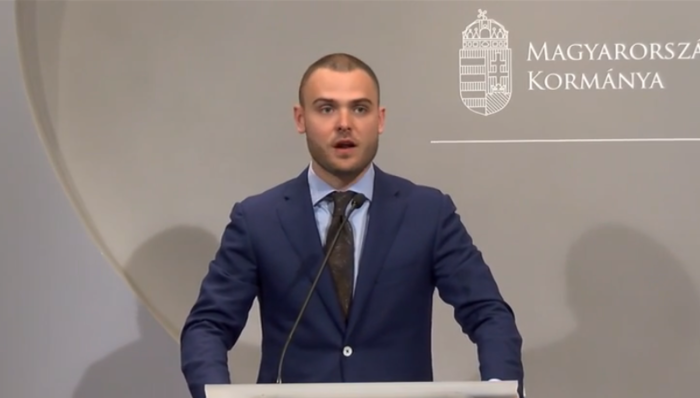 At last week’s press conference deputy undersecretary for communication Nandor Csepreghy (pictured) announced that the European Commission was suspending payment of HUF 700 billion in EU development funds with regard to the Economic Operative Program for the 2007-2014 funding period for “technical reasons having to do with the method of accounting for funds.”  In fact, it turns out that the HUF 700 billion figure applies to the entire 2007-2014 funding cycle.  However, as some HUF 550 billion has already been paid to date, the amount in question amounts to a “mere” HUF 150 billion.

Furthermore, it turns out that the EU suspended payment for reasons that are fundamentally different then those cited by Csepreghy last Wednesday.

According to the hvg, Hungarian requests for disbursement of EU development funds in July and September of last year were rejected in October by Brussels, which warned at the time that ongoing investigations could result in a formal suspension of the economic operative program.

According to hvg. overpricing, overpayment and lack of official oversight in the case of projects completed and paid for in 2012 and 2013 were the main reason for the EC’s decision to suspend some HUF 150 billion of development funds.

In fact, an investigation conducted in 2014 into projects completed and paid out in 2012 and 2013 under the second Orbán government identified “serious deficiencies” which called into question “the reliability of the process by which expenditures are confirmed.”

Brussels reportedly gave Hungary until December of last year to take appropriate steps and to notify Brussels of this fact.  Instead, Hungary did not get around to responding until the deadline had lapsed, and even then took issue with most of the commission’s findings.

EC inspectors found that those responsible for evaluating proposals did not properly review the submitted budgets, which, the commission concluded, contained items that were significantly overpriced, as well as excessive and unwarranted fees.

According hvg, the government told the commission the reason the price was so high was the seller had the exclusive right to import the equipment to Hungary.    When hvg contacted the director of the company, Profi-Bagger Építőipari Gépkereskedelmi Kft., he said the company requesting the bid never actually purchased the equipment.  Moreover, he confirmed that the machine could be purchased from any authorized retailer within the EU.

The third specific item mentioned in the report is a DURMA CNC press machine that was allegedly purchased for five times its market price.  The auditor said the realistic market price was EUR 45,000 (HUF 14 million).   The project priced it at EUR 208,000 (HUF 63 million).  In response to the government’s claim that this was the prevailing market price at the time, the committee said they looked at the company’s website and found it for one-fifth the price.

Brussels also determined that fees were both overpriced and excessive.  One 2013 project involved monthly salaries amounting to 1.7 million, whereas the EC determined they should not have exceeded HUF 250,000.

The government attempted to justify the salary on the grounds that the projects in question were “complex and complicated”.  However, Brussels did not accept this explanation, concluding that however complicated the projects were, this did not justify employees responsible for “coordination” and “marketing” earning 7-9 times that of those fulfilling similar tasks on similar projects.

Another project provided for the payment of expert fees of HUF 14.4 million each month for work which, according to the EU only cost HUF 625,000 in the case of another project.  The government did not agree with the finding that the fees were overpriced, saying the EU based its findings on domestic animals whereas the project pertains to beasts of burden.  The commission ruled out the work costing 23 times as much.

444.hu reports that the EU objected to the same things in its decision as in November of last year, namely that the funds were remitted to certain companies in a directed manner.  Common to all of the projects is the fact that the required references, the deadlines and miscellaneous conditions were unnecessarily determined so that only a narrow range of companies could qualify.

Last year money did not arrive between April and August for the same reason.  And when the EC got around to resuming funding, 16 out of 55 projects were rejected.  At that time the EC fined Hungary HUF 4 billion in the case of half of the projects.  Fortunately, because Hungary had not yet disbursed the money to the winners in the case of the remaining projects, it did not have to pay fines.

Because of the mistakes detected by the EC, the commission reportedly gave Hungary a list of things to do which Hungary promptly ignored.

The government wrote to the EC that, except for some minor issues, it did not agree with Brussels’ point of view.  Although it reported to Brussels that it had completed the inspection of expenditures, Hungary never submitted a plan detailing proposed changes in the interest of preventing future abuses.