Diplomatic row breaks out between Hungary and Romania 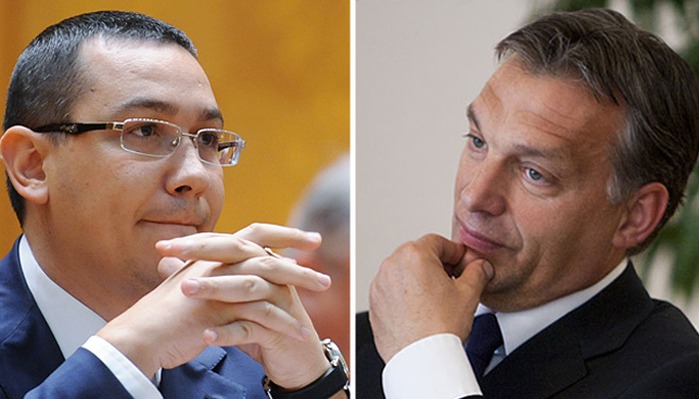 “We do not point at a map of Hungary, even though we could raise the question of the border extending to the Tisza [river], because we are decent and well-behaved.  So we call on them not to interfere in questions pertaining to changes to the region and the degree of autonomy.  We are talking about impertinence, and I say with all seriousness that if they force the issue of autonomy for Transylvania, I do not see why we cannot speak of autonomy for the region [within Hungary-ed.] between the border and the Tisza.” – Romanian President Traian Băsescu

An interview appearing in the Monday edition of the Bucharest daily newspaper Zákonyi România liberă has triggered yet another row between Romania and Hungary.   Tensions between the two countries have been growing since Hungarian Prime Minister Viktor Orbán delivered his annual speech in the Carpathian resort town of Baile Tusnad criticizing the policies of the Romanian government in ideological terms.

In the interview Hungarian Ambassador to Romania Botond Zákonyi blamed “a lack of goodwill” on Romania’s part for the failure to realize certain EU-funded regional projects.  Furthermore, he rejected as “light-minded” earlier comments made by the Romanian foreign minister criticizing Orbán for “posting historical symbols” on his Facebook page.   The symbols evoke an era when Transylvania was either an independent principality or a constituent part of Hungary.

“It is not possible to turn the fact that somebody is distributing badges depicting historical symbols into a problem of bilateral relations,” Zákonyi said.  “In the field of bilateral relations a more important problem is limits on the use of mother tongues, national symbols, for example the rejection of the use of the Szekler flag, or the matter of the Hungarian faculty at the medical university in Marosvásárhely [Romanian name: Targu Mures].”

Zákonyi further complained to the Bucharest daily about the Arad-Szeged gas pipeline and the number of border crossings, at one point accusing Romanian Prime Minister Viktor Ponta of playing a double role: “He plays that Victor [Ponta] is the good boy, the European, the social-democrat, while Viktor [Orbán] is the bad boy, the nationalist, the anti-European.”

On Monday the Romanian Foreign Ministry summoned the Hungarian ambassador, only to be told that he had gone on holiday.  It was left to the Hungarian embassy chargé d’affaires, Károly Nagy, to account for his superior’s comments.

Romanian Foreign Minister Bogdan Aurescu responded by calling Zákonyi’s comments on bilateral relations “unacceptable and disrespectful”.   He said the interview proved that the Hungarian party respected neither the general framework nor the political and legal bases of the bilateral relationship, saying it had violated the 2002 agreement covering the strategic partnership between the two countries.   Aurescu also complained that the ambassador had failed to mention anything concerning the status of the road connecting Romania’s A1 to Hungary’s M43.

In an interview given to Romania TV Monday night, Ponta accused Hungary of deliberately provoking Romania.  The Romanian head of government pointed out that Hungary is the subject of “regular criticism” by European countries and the United States for antisemitism, revisionism, its friendly relations with Russia and the fence it is erecting on the border with Serbia against illegal migrants.  Ponta said Hungary was “attempting to draw Romania into a scandal” but he was not willing to “play this game”, adding that the Hungarian government would be held responsible for its actions.

On Tuesday the Hungarian Ministry for Foreign Affairs and Trade (KKM) announced that it had summoned Romanian Ambassador Victor Micula to explain Ponta’s “unacceptible accusations with regard to Hungary.”  Micula subsequently denied that he had been summoned, claiming instead to have requested an audience on Monday which he claims was only granted the following day.

In a statement released on Tuesday, KKM accused Ponta of resorting to “anti-Hungarian agitation” in an effort to “cover up domestic crisis caused by the fact that numerous government members have been indicted and convicted”.

The Romanian prime minister responded to this by posting the following to his Facebook page:

“I do not want to step into Budapest’s trap of provocation, but the Romanian government cannot tolerate indefinitely unacceptable derailments on the part of Hungary’s ambassador to Bucharest or Hungarian officials visiting our country.”

Ponta believes the Romanian foreign minister reacted to the Hungarian ambassador’s comments in a balanced manner consistent with European norms.  “I respect Hungary and the Hungarian people, but I do not need approval from Budapest to express opinions on questions affecting my country,” wrote Ponta, adding that, unlike other Romanian political actors, he was not being forced by the European People’s Party (EPP) to turn a blind eye to statements departing from the rules of diplomacy and respect between the two countries.

Băsescu said Hungary’s efforts to bring about regional autonomy for Transylvania should be directed at Bucharest.  While acknowledging that Hungary’s rhetoric was not aggressive in this regard, he said the question of Transylvanian autonomy should be excised from official Hungarian pronouncements.

“We do not point at a map of Hungary, even though we could raise the question of the border extending to the Tisza. But we are decent and well-behaved.  So we call on them not to interfere in questions pertaining to changes to the region and the degree of autonomy.  We are talking about impertinence, and I say with all seriousness that if they force the issue of Transylvanian autonomy, I do not see why we cannot speak of autonomy for the region between the border and the Tisza,” warned Băsescu.

A “flippant and unworthy” exchange?

Oradea-born publicist and Democratic Coalition (DK) politician Attila Ara-Kovács told ATV on Tuesday that statements made by representatives of both countries were “flippant and unworthy”.  He said the fact that Hungary’s relationship with nearly all of his neighbors, especially Romania, had deteriorated over the past few years needed to be taken seriously.   The DK politician said the whole matter started at the Tusványos Free University in July when Viktor Orbán criticized the Romanian government in ideological terms, to which Victor Ponta also responded ideologically.  “In theory of course it is possible to formulate criticism,” said Ara-Kovács, who attended university in the Transylvanian city of Cluj-Napoca, adding that “certain economic concerns are valid”.  However, he warned that what is happening does not serve the interests of 1.2 million Hungarians living in Transylvania.