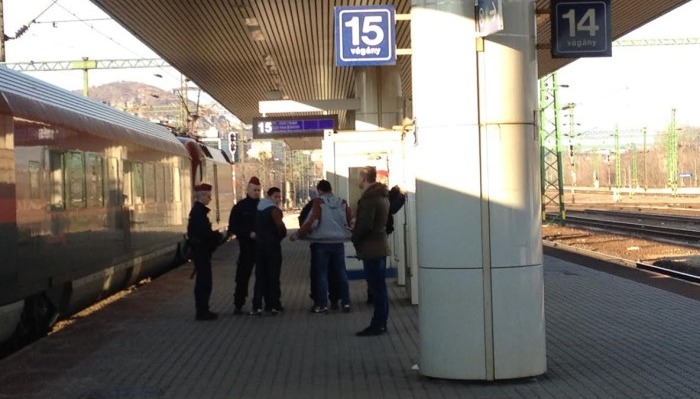 The past weeks have seen an increased influx of refugees entering Hungary and consequently the EU through its southeastern border. Most of them are bound for Western Europe, and many of them are Afghans, Syrians and Iraqis fleeing civil war and resulting economic hardship.  In the past weeks, many refugees have been halted and detained by the police at the southern border, in Budapest and in the northwest city of Győr, where police removed them from trains bound for Austria and Germany.

Fearing arrest, refugees are finding more and more creative ways to avoid authorities and board trains bound for Western Europe. Many use bus lines or pay taxis to take them to Vienna. Many try their luck boarding trains bound for the west from Kelenföld station in southwest Budapest rather than risk Keleti with its increased security profile. 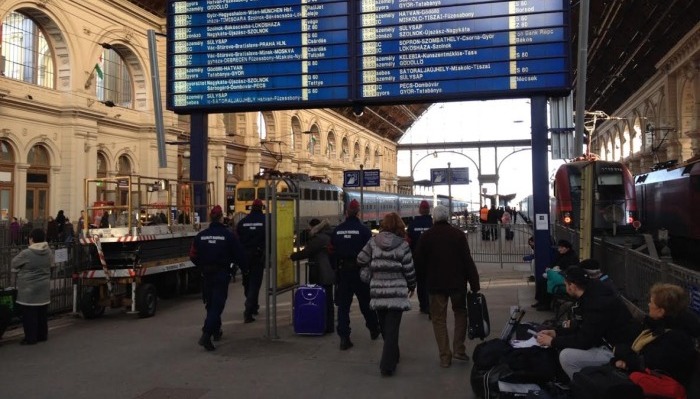 Upon arrival at Budapest’s Keleti station on Thursday afternoon, we attempted to inquire about the status of the detained refugees, but neither Hungarian State Railways (MÁV) nor the local police station were allowed to comment anything. Policemen at the station were nowhere to be seen.  They only appeared a few minutes before the train departed.   Not much movement could be seen until the locomotive started its engines, at which point a number of people carrying small backpacks quickly boarded the train.  Special Police units were heavily present all around the departing Munich Railjet.

Austrian Railjet trains traveling between Budapest and Zurich via Munich usually call at Budapest-Kelenföld station in southwest Budapest. Upon requesting a train ticket there from Keleti (East) station, the ticket office told us that they could not issue tickets to the southern Buda stop.  The only way to make it to Kelenföld before the Railjet was to take the Metro 2 to the Metro 4.

Kelenföld is a much smaller station than Keleti and is situated in the outskirts of Budapest.  It is the southwestern terminus of the Metro 4 line completed last year.  At the platform, groups of people carrying bedding and baby carrier baskets could be seen.  Kosovars know they have better chances of making it out of Hungary if they board the train to Austria here instead of heavily patrolled Keleti.

As the train doors opened, they swiftly hopped on and disappeared inside the compartments.  Five special policemen dragged two young men off the train onto the platform. Around half an hour passed while the policemen wrote the two men up, sitting calmly beside them.  Handing them some documents, they put them on the next train to Győr.

Upon inquiring from the policemen why they did this and who the two young men were, they answered that they were Afghans who were unable to present any documents legally permitting them to enter Hungary. It turned out it is a standard practice for police to issue illegal immigrants warrants to present themselves at one refugee camp or another, along with a free, one-way train ticket.  Those failing to check in at the camp within two days are put on a  wanted list and will probably be expelled from the country, according to the police, who also told us that the number of refugees had been volatile and unpredictable this week: sometimes there were only a couple, other times many.

We asked Budapest Chief Police Constabulary (BRFK) and Special Police whether this really is a standard procedure. We also would have liked to know what is the procedure of detention these days, recalling that at the beginning of February, Kosovars  were rounded up at Keleti station and transported to camps in police vans and minibuses after being forced to wait for hours.   According to press information, the same measures are being taken at the southern border village of Ásotthalom near Szeged. Special Police forwarded our inquiry to the National Police Command (ORFK). The ORFK press office told the Budapest Beacon that our queries are “currently being processed.”

Prime Minister Viktor Orbán told public radio’s 180 per (180 minutes) on Friday morning that he personally would “imprison every single refugee.” He elaborated to the presenter his plan to ask permission from the Hungarian people during another National Consultation to introduce an immigration system that is “radically different from European norms.” During this process, all refugees entering Hungary would be unconditionally expelled after a shortened detention period. If he gets that permission, Orbán said he will represent this viewpoint in Brussels. The prime minister underlined that even if Hungary is only a transit country, the majority of refugees ending up in Germany or Austria will be sent back to Hungary.

“If we will not have the appropriate legislation to immediately detain and expel them then, this means Hungary will soon become a large refugee camp.”

With this remark, Orbán was referring to the EU regulations known only as Dublin III. Their aim is to ensure that any given refugee only files one application for asylum in one EU member state–the one where they first encounter EU immigration authorities. Enacted both by the European Parliament and the European Commission in 2013, Dublin III has been heavily criticized by human rights groups for restricting the principle of free movement. The situation of Hungary’s asylum system within the EU is even more problematic, as both German courts and recently the Court of Human Rights in Strasbourg ruled against extraditing refugees back to Hungary, as “refugee detention” as well as “immigration detention” violate human and refugee rights. They also claimed that conditions in Hungarian asylum detention barely surpass conditions in most of the refugees’ countries of origin.

Viktor Orbán is not the only one capitalizing on the recent refugee situation lately. A few days ago, Krisztina Morvai, a former Jobbik, now independent MEP, made a short video report on the situation at Ásotthalom, where she is pictured roaming around the southern border area in the company of the village’s Jobbik mayor, László Toroczkai. Toroczkai previously called for a fence to prevent irregular migrants from crossing over to Hungary. According to Morvai, the daily rate of 1500 refugees poses a grave security risk, and she warns that among them may be terrorists arriving in EU territory without any obstacles. According to Toroczkai “Even a tank could be smuggled through this open border.” Their footage testifies to the fact that there is little preventing them from crossing into Hungary illegally from neighboring Serbia.

In her speech at the European Parliament on Wednesday, Morvai emphasized again that there could be many Muslim Jihadists among Kosovar Albanians aiming to reach Europe for the sole purpose of causing havoc, and therefore the situation in Hungary could well be resolved by implementing special anti-terror measures.

During the past few days hundreds of refugees eager to reach Munich or Vienna have been taken off trains at Győr.  Last Friday, southern Csongrád county police detained more than 1300 people around the village of Ásotthalom alone.