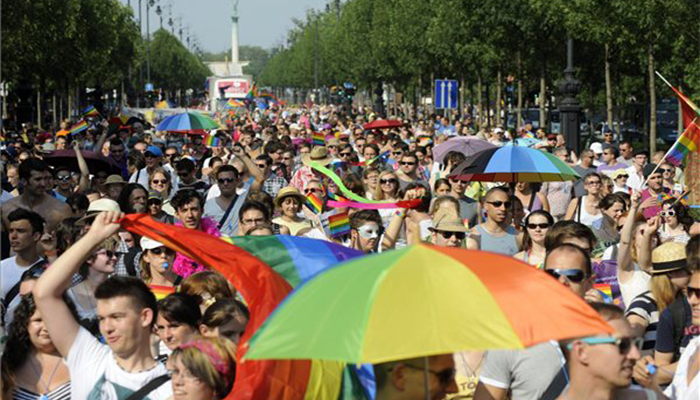 A record 31 embassies in Hungary have issued a joint statement celebrating the 21st Budapest Pride Festival. This is not the first time they have shown their support. Last year 25 embassies backed the lesbian, gay, bisexual, transgender and intersex (LGBTI) communities’ event. (The full list and text can be read here.)

“We look forward to the Pride celebrations, to the respect which the Hungarian people will show, and to the determination of the Hungarian authorities not to allow those of extreme views to disrupt what should and will be joyful occasions,” the statement read.

Budapest Pride Festival was officially opened last Friday, and the annual parade, the festival’s largest event, will be held this Saturday. At the opening ceremony – attended by Hungarian politicians and diplomats – president of Szivárvány Misszió Alapítvány (Rainbow Mission Foundation) Szilvia Nagy said she hoped for a peaceful week of celebrations.

“We would be happy if the spokesperson for the government mentioned Budapest Pride and if police decided to cordon off those few anti-gay protesters and not the festival itself,” she said.

Last year’s parade drew between 15,000 and 20,000 people, including numerous corporate sponsors and diplomatic representatives. After violent protests a few years before, police cordoned off intersecting streets and open areas to prevent anti-Pride demonstrators from spoiling the event. This year, similar protests are expected during the Saturday parade.