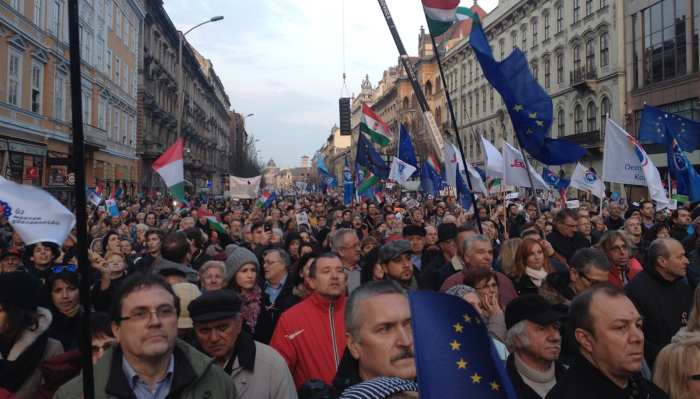 “Respect for the brave!”

At 10:30 am in front of the National Museum,  Hungarian Prime Minister Viktor Orbán delivered a speech from a podium proclaiming “respect for the brave!” surrounded by an invitation-only crowd of Fidesz supporters.  Whereas previous official events have suffered from a pronounced dearth of young people, especially school children, today’s event featured scores of school children reportedly recruited from Budapest schools by the Klebelsberg Institute which operates Hungary’s primary and secondary schools on behalf of its owner, the Hungarian state. 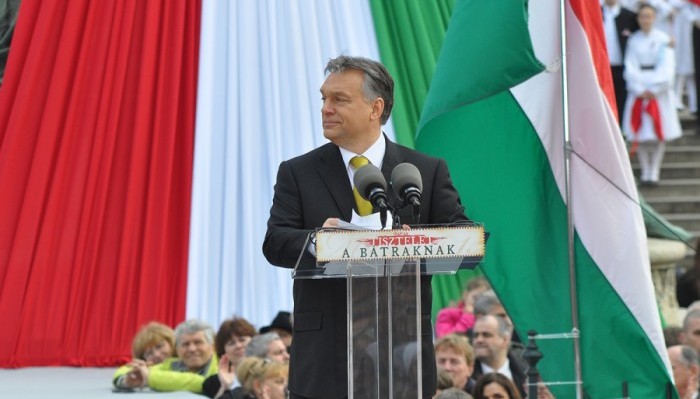 At one point during the speech ten or fifteen uninvited spectators began chanting “Orbán scram!”  At around 11 am some 30 to 40 protesters tried to interrupt his speech by shouting “Fidesz mafia.”  Shortly after 11 am several members of the Country Assembly Movement (OGYM) arrived with drums and horns.  They were quickly surrounded by police but allowed to leave upon the conclusion of the Prime Minister’s speech.

Protesters leaving in the direction of the Astoria hotel exchanged words with government sympathizers.  Chanting “Viktor, Viktor!” Orbán supporters denounced the protesters as “traitors” and “hooligans”.

Later that afternoon in front of the Eastern (Keleti) train station, several thousand protesters gathered to demand the restoration of Hungary’s republic.  Protest organizer Zoltán Vajda was the first to take the stage, likening the Fidesz system to a “house of cards” that “will collapse.”

“One day even those will be grateful to those of you here who did not come out: the deceived Fidesz voters,” said Vajda.  Echoing Orbán’s sentiment, Vajda called for “respect for the brave”, pointing out to the crowd that “you are the brave!”

Vajda was followed by thespians Andrea Fullajtár and János Kulka.  Fullajtár read out a post by Edgar Swan which appeared on the “Orditok” (I scream) blog in February.  The author wrote

“I don’t want to live in a country where it is a crime to be Gypsies, Jews, foreigners, gays, liberals, democratics and thoughtful people.”

“A modern Hungary that belongs to Europe is the country I want to live in,” said Kulka before Fullajtár invited Solidarity movement activist István Káposznyák to address the crowd.

Káposznyák started by saying that the colors of the cockade symbolize strength, loyalty and hope:  “We must pass on this hope”.  He said the people of Debrecen “had suffered for 17 years the arrogance” that has caused so many people to leave Hungary over the past five years.

Káposznyák said the country was in big trouble owing to theft and corruption, and this is why strength, loyalty and hope are needed:  “Strength, so that we can hold out to the end; loyalty to the democratic values system; hope, that there will once again be a Hungarian republic.”

Before introducing Zoltán Kész, Kulka told the crowd that it was necessary to demolish “one brick at a time” Fidesz’s two-thirds majority system, which Kulka called “a wall blotting out the sun.”

The man who “knocked out” the Fidesz supermajority

Kész told the crowd that those in power before 1990 had managed to hold on to it while “casting millions into immeasurable poverty.”  He said Prime Minister Viktor Orbán had an “unclear communist past” about which he accused the Prime Minister of lying.  “This is where things stood in 1989, when they cheated and stole from us the system change.”  Kész then talked about the Orbán system and the “eastern opening”, saying that instead of the Prime Minister’s theories the people wanted democracy and citizenship.  “For us Europe is our ally and we do not need eastern dictators,” said Kész, who concluded his speech by getting the crowd to chant “Orbán scram”. 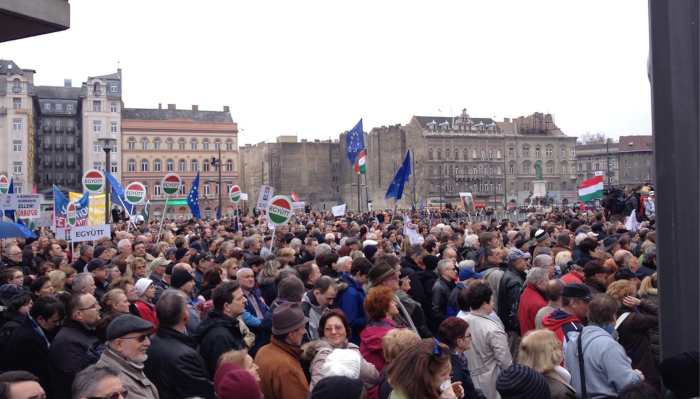 Upon the conclusion of Kész’s speech, the crowd left for the Astoria. At the head of the procession, following a flatbed truck whose public address system blared music, protest organizers marched behind a banner proclaiming “New Hungarian Republic.” 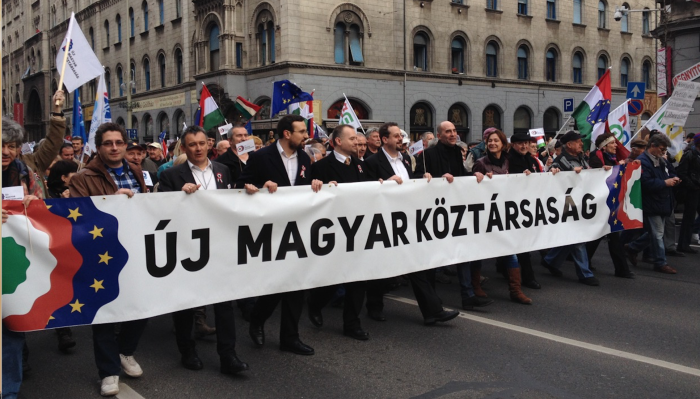 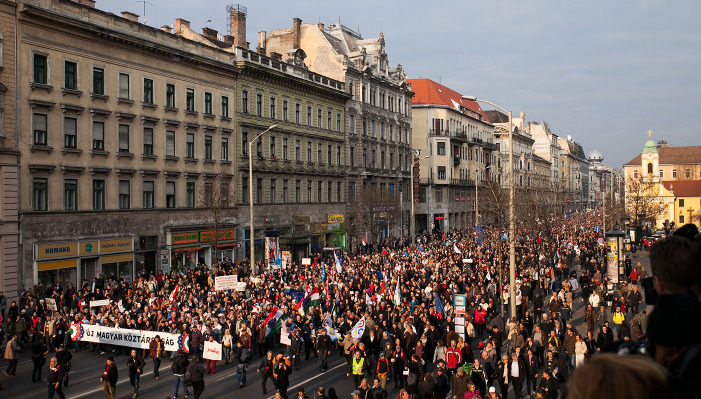 By the time the crowd arrived at Astoria it had grown to well over ten thousand people.   From the stage it was not possible to see the end of the crowd.  Once the crowd had finished singing the national anthem, the second group of speakers took to the stage. 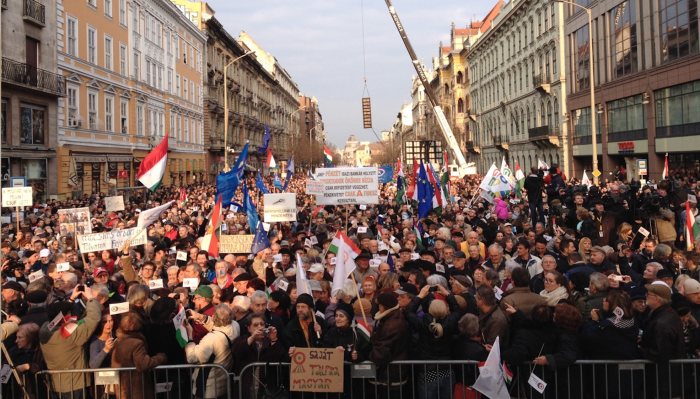 The first was Kossuth prize-winning poet and playwright Lajos Parti Nagy, who said he was there because he was a “free citizen of Hungary and wanted to remain such”.  He said that under Orbán Hungary had become “a parody of itself”, adding that “Europe feels sorry for us and smiles at us Hungarians”.  Nagy said that if Hungary is not able to change, then Orbán will “triumph even in failure.”  He said the most difficult thing to handle would be the “murderous fire arising from the bitterness” and that “anger will be most difficult to dissipate.”

Prior to introducing Network for Academic Freedom activist Emilia Nagy, Kulka told the crowd that the best investment was to ensure everyone the same accessible educational system.

The teacher called “offensive” the fact that the ministry responsible for “overseeing” education was called the Ministry for  Human Resources.  “To me people are not a ‘resource’,” she said, observing that the government had appropriated or distorted many words over the past five years.   “For example, the word republic is very much so missing!” she exclaimed, saying that only the nation could offer a solution to the problem.  “For this reason let us demonstrate solidarity with fellow human beings,” said Nagy, who believes the current youth still know what they must do, but fears that the youth of the future will not.

Péter Závada Péter then took to the stage to read aloud György Petriás’ poem “By an Unknown Poet in Eastern Europe, 1955”.

He was followed by women’s rights activist Ágnes Pletser who spoke about the role of women in the “Orbán regime”.  She started by saying that “In Hungary today we women are the most populous minority”.  She said women earn less than men “even though they work as much as men, or more”.  She called on every woman to break the “kitchen-children’s room-bedroom” triangle, saying that every “person of goodwill must fight against inhumanity, harshness and indiffernce, in other words against the Orbán regime”.

Afterwards Kulka sang a song titled “Somewhere in Europe” to which the crowd responded with thunderous applause.

Kulka told the crowd that “if freedom could be crushed with the might of the law, then that could also be used to restore it”, and announced that the protest organizers had initiated a “system-destroying referendum!”, to which the crowd also responded enthusiastically.

International lawyer Tamás Lattmann then took to the stage to announce a referendum on 19 questions.  “This system is harmful to Hungary”, said the deacon of the National Service University, adding that “it deprives its citizens of the opportunities of a real citizen society.” He said some of the questions pertain to official corruption.  He told the crowd that even though the government may own everything, “there is no cause for despair”.

“They have friends in the east, we have western values.  They have a parliamentary majority, we have a society.  They have power, we have freedom, and nobody can take that away from us,” said Lattmann. “Let there be a real declaration of assets on the part of public officials, and let there be open public procurements.  Let there be opposition to corruption on a European level.  And let it not be possible to classify a project.  Let’s bring an end to the waste and to governmental environmental pollution.” 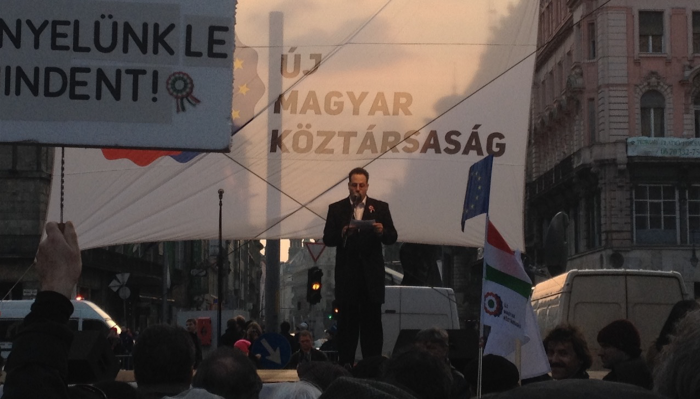 Protest organizer Vajda then took to the stage to announce that “today it is not necessary to protect the country from foreign conquerors, but from domestic ones”.  He said Orbán “only cares about power.”  He then cited a list of demands.

“Let us demand the elimination of the obligatory chamber of commerce fees, an accounting of obligatory payments to the government, the restoration of the previous highway toll system, the end of the state tobacco monopoly and the elimination of the Sunday work ban, as well as the idea that Orbán should move to the Castle District for HUF 200 billion.” “To prison” chanted the crowd.  “He always needs for everything to be bigger,” said Vajda, referring to the fact that the Prime Minister’s current office is already larger than that of Russian President Vladiir Putin or US President Barack Obama. 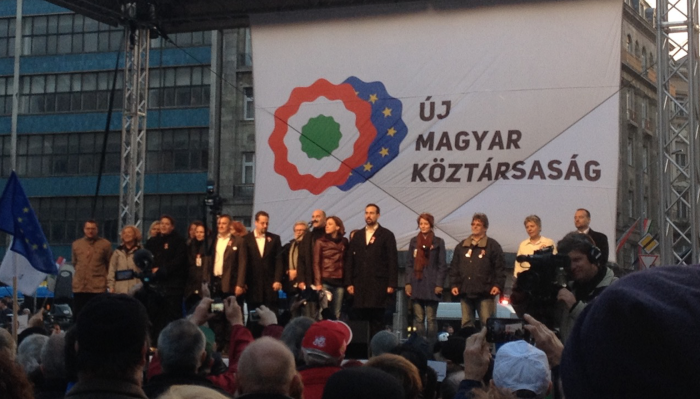 Protest organizer Balázs Gulyás was the last to speak.  “Indifference is a greater opponent than Viktor Orbán,” said Gulyás, referring to the fact that, in order to bring about change, everybody must do something.  “It is not enough to criticize the govenrment, we cannot allow ourselves to be passive.”  He listed several additional questions to be presented to the people of Hungary over the course of a  referendum.  “Let public workers be entitled to the same rights as other workers.  Let’s raise the minimum age for leaving school to 18.  Let’s do away with hospital waiting lists.  Let’s eliminate using public funds to support football even as we classify projects, and let the secret agent files be made open to the public.”

Gulyás invited the crowd to visit the www.ujmagyarkoztarsasag.hu website and asked them to support the referendum.  “Everything depends on us.  We will prevail,” he said.