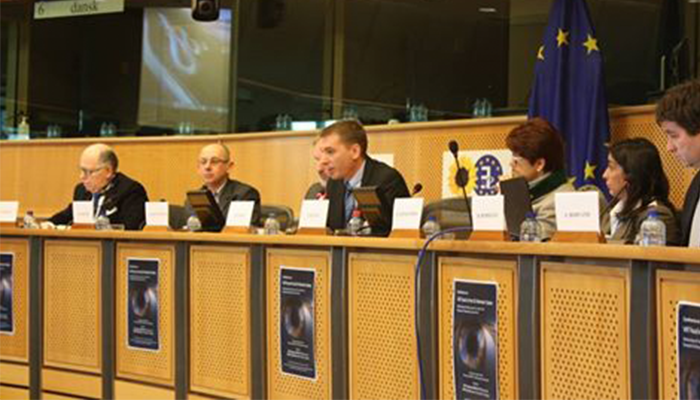 Hungarian MEP Javor Benedek (center) chaired a conference in Brussels on Wednesday entitled “VAT frauds in EU Member States and the competence of the EU Institutions.”  VAT fraud experts from around Europe spoke about the problem in their respective country, as well as the measures being taken at the EU level to combat this particular kind of fraud. The conference was sponsored by the European Greens.  Former NAV inspector-turned-whistleblower Andras Horvath spoke about his own experience and the need for whistleblower legislation.

Fabiola Annacondia gave a presentation on the history and legal background of VAT fraud in the European Union and spoke about efforts taking place on the European level to find solutions for dealing with “VAT gaps” on the member state level.

She said there are many exemptions and different VAT rates across the EU, and that by making a broader VAT base within the EU, tax authorities may have an easier time preventing such fraud and closing the VAT gap.

“All of this has to work within a single market,” Annacondia said. “That’s what is difficult. The Commission created an action plan with short-term, medium-term and long-term objectives. Some of the action plans are in place, some are in preparation and there are some where no action has taken place.”

She said responsibility ultimately falls on individual member states to help solve this problem because VAT gaps at the national level become issues that have to be dealt with at the European level. However, she remained hopeful about some EU-level plans to combat VAT fraud that are in the pipeline, including a standard VAT return for all member states that help simplify compliance for businesses.

Carlo van Heuckelom (Head of Business and Economic Crime at EUROPOL) began his presentation by clarifying a few misconceptions about his organization.

“First,” van Heuckelom said, “EUROPOL is not the European Federal Bureau of Investigation.” He explained that his agency has no investigative powers, nor does it aspire to have such powers. EUROPOL is tasked with facilitating information exchange between agencies and providing criminal analysis between member states.

EUROPOL serves all police agencies, border patrols, customs agencies, local police and even intelligence services. Combating VAT fraud is something that is done according to the criminal law of a member state and presently there is no harmonizing solution at the EU level. In some EU countries, he explained, VAT fraud is investigated by customs agencies.  In others it is investigated by so-called tax police, and other states have other agencies to do so.

According to van Heuckelom, in 2011 the European Commission estimated Europe’s VAT gap, or the difference between projected and actual VAT receipts, to be EUR 193.5 billion. However, the large VAT gap isn’t entirely attributable to fraud and organized crime.

He estimates that about EUR 40-60 billion of the VAT gap was directly caused by organized crime networks. Such “hardcore organized criminality” in VAT fraud involves very serious turf wars, networks and gangs. He says that such criminal elements are even involved in murder and are linked to cases of corruption. He explained how misleading or fraudulent businesses are incorporated in order to facilitate such forms of criminality.

“You have to have a holistic overview because it is of tremendous importance to have an intelligence picture that covers the entire [European] territory. We need a way to have an overview of conduit companies in order to be able to act quickly and predict where future missing traders (companies established to engage in cross-border carousel VAT fraud) will emerge. This is something that can’t be done from a purely national perspective.”

Van Heuckelom made a case for a “European Union integrated intelligence center” that would have access to intelligence otherwise only available to administrative or fiscal authorities at the EU level and in member states. He also argued for fighting against organized crime by enforcing due diligence on companies in the supply chain. “How can retailers sell something for cheaper than it actually costs to manufacture it?”, he asked.

Balazs Romhanyi, president of the Fiscal Responsibility Institute based in Hungary, discussed the macroeconomic implications of VAT fraud and the type of policy instruments needed at the national level to combat fraud.

Andras Horvath, the Hungarian tax authority whistleblower responsible for uncovering alleged corruption within Hungary’s tax authority (NAV), also made a presentation at the conference. He shared his personal experiences at NAV, including his failed efforts to convince NAV management and government officials of serious “carousel tax cheating” schemes.

Horvath explained how in 2012 NAV’s management closed the tax authority’s division specializing in VAT fraud, and how the incident contributed to his decision to become a whistleblower.

Instead of investigating his claims, Horvath said, the Hungarian government prosecuted him, harassed him, searched his home and sued him in retaliation. Horvath used his own story as an example for why both Hungary and the European Union need stronger protections for whistleblowers.

He also discussed his specialization in VAT fraud in two particular areas, small retailers and grocers, and the government reluctance to tackle serious cases of fraud.

“In the Central Eastern Europe region,” Horvath said, “cases of carousel tax fraud are a problem for every country.”

He discussed how fluctuating VAT rates in EU Member States cause the criminal activity to bounce from country to country. He also explained the complex nature and suspicious characteristics of “missing trader” companies.

VAT frauds in EU Member States and the competence of the EU Institutions, GreenMediaBox.eu; 4 February 2015.