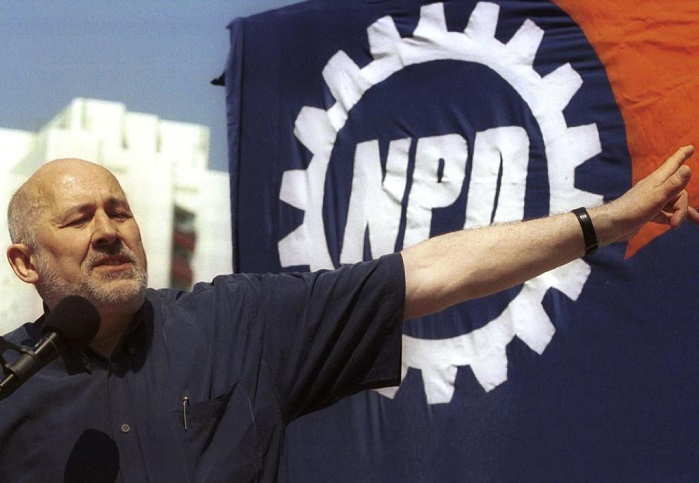 Horst Mahler (above), an 81-year-old far-right extremist wanted by police in his native Germany, was arrested in the western Hungarian city of Sopron on Monday. Last week, Mahler publicly expressed his hope that Hungarian Prime Minister Viktor Orbán would grant him political asylum.

Mahler had a colorful career in Germany, first as one of the founding members of the radical left Red Army Faction — known as the Baader-Meinhof Group — in the 1970s. In his later years, after serving time in prison, he turned to the far-right, serving additional prison sentences for incitement and Holocaust denial. He was on probation when he fled to Hungary.

Mahler may be an unusual case but his belief that Hungary is a political haven for the far-right is not. A growing number of such figures from across Europe are, in fact, seeking refuge in Hungary.

“There’s a small but quite rapidly growing Western European emigré community growing up here, so there’s people from France, Britain, Sweden, I know there are several Germans who are probably moving here very shortly,” far-right British politician Nick Griffin said in an interview at an anti-George Soros conference in Budapest in March.

“What I see is Hungary becoming a pole of attraction for a strand of thought within the whole of Europe, and further afield actually, of people who don’t want to commit civilizational suicide,” he said, explaining that Hungary’s political scene, combined with relatively cheap living costs, draws nationalists from all over Europe.

Griffin himself, a frequent visitor to Hungary, plans to move permanently to the country.

The politician has identified László Toroczkai as one of his friends in Hungary. Toroczkai, the infamous mayor of the border village of Ásotthalom and a current vice-president of the radical-right Jobbik Party, once served as leader of the far-right 64 Counties Youth Movement.

“I think he is a remarkable, very charismatic young man,” Griffin said of Toroczkai.

Griffin has also referred to domestic extremist groups such as the Movement for the Defense of Hungary and Betyársereg (Army of Highwaymen) as local groups he likes to work with.

Another far-right British figure already residing in Hungary is Jim Dowson, a Scottish Calvinist Minister and former far-right British politician who was a member of the British National Party (BNP), and later founded Britain First. It is from his office in central Budapest that he oversees an international far-right media network.

Earlier this year British watchdog Hope not Hate revealed that Dowson was working with Russian ideologue Alexander Dugin to also set up operations in Belgrade.

Both Dowson and Griffin attended a “Stop Operation Soros” conference in Budapest that featured speakers from the 64 Counties Youth Movement and the Russia-friendly Knights Templar International, among others.

Other far-right figures already living in Hungary include the Swedish Democrats’ Erik Almqvist, who arrived in 2013. Another Swedish far-right figure, Kent Ekeroth, is also known to spend a lot of time in the country.

“Viktor Orbán is probably the most important state leader in the world today. He is a role model for Western Europe,” Ekeroth told Magyar Hírlap’s Mariann Ory in an interview last year.

“I think what Hungary is doing is the way to go,” he said.

A full recording of Nick Griffin’s discussion of why Hungary is attractive for far-right nationalists can be found here.