Experts debate whether Hungary is really a “mafia state” 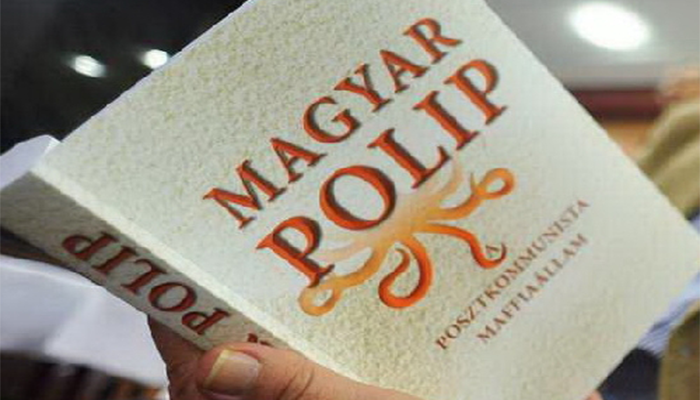 Whether or not Hungary could really be considered a mafia state was the subject of a discussion Monday evening between Hungarian sociologist and former liberal politician, Bálint Magyar, author of “Hungarian Octopus: The Post-Communist Mafia State” and Transparency International CEO József Péter Martin hosted at the Buda Liberal Club.

“Does corruption characterize Hungary or something else?  Is it unique or does this system exist elsewhere” asked the moderator, 168 Óra journalist Dóra Ónody-Molnár, who formally worked for Népszabadság.

“We can only measure assets that are transparent,” responded napi.hu editor Péter Szakonyi, whose paper published a list of Hungary’s 100 richest people last month.  By way of exasmple, he cited “the moment Simicska bought Közgép in his own name he joined the ranks of the richest people.”  He said there is a businessman everyone assumes to be among Hungary’s 100 richest people, but isn’t because nothing is in his name (presumably he was referring either to prime minister Viktor Orbán or to propaganda minister Antal Rogán-ed.)

Szakonyi pointed out that this year’s list contained seven new names, including number of building contractors that are former. business associates of Simicska.  The journalist cited Hungary’s fourth richest individual, real estate magnate Sándor Demján,  who told him a few years ago that the first twenty names would change within a few years.  “He was right,” said Szakonyi.

It is not certain that Hungarian corruption is totally unique, said Transparency International Hungary CEO József Péter Martin.  However, it is not possible to compare the corruption taking place in Hungary, where there are absolutely no consequences, with the corruption the exists in Western Europe, where politicians have lost their positions just for having dinner with a business man.  Ónody-Molnár cited the example of former French prime minister François Fillon, who failed to reach the second round of the recent presidential election after it was revealed that his wife and her relatives had been on the government payroll.

Bálint Magyar asked whether corruption in Hungary could be understood in the traditional sense of the word.  He said the Hungarian system was unique in Europe in that it resembles in many respects that of Azerbajzhan or Russia.  Corruption in Hungary is not merely systemic. Nor is it the case that organized crime has captured certain political actors or the entire state.  Rather, instead of an organized underworld, corruption in Hungary operates in the open and involves using state power to capture oligarchs and markets.  “This is something other than traditional corruption” said the former SzDSz chairman, who believes it is unique for such a system to emerge from a liberal democracy.

The former Minister of Education continued by saying that the ruling elite forms part of an accepted political family – an informal leadership decision-making center, in which non-blood relations are transformed into blood relations.  He cited the cluster of companies owned by politicians’ wives.

Martin said Transparency International regards corruption to be when somebody abuses power entrusted to them for personal gain.  He believes the definition is sufficiently broad and “includes legalized corruption as well.”  He said that the damage caused by the system is not first and foremost the assets that have been stolen, but rather “the distortion of the system itself.”

Martin said that other post-communist states had experienced state capture involving the capture of the state by oligarchs and politicians, even within the European Union.  He said that in Hungary oligarchs and politicians formed an informal network and that it was important to bear in mind the ideological foundations of the system which, he said, is part nationalism and part government obsession with centralization.

Martin believes that were Hungary to function like a mafia state, then the justice services would work entirely for the government.  He said that while this may be true for prosecutors, this did not apply to the courts, pointing out that Transparency wins a majority of the cases it brings against the government.  Moreover, Martin points out that the notion of “mafia” implied that things take place outside the law, but in the case of the settlement bonds, the TAO money, and the MNB foundations, they are all within the law.

According to Szakonyi, during the eight years between 2002 and 2013, billionaires acquired their wealth and released the relevant data.  These days the same people are much more aversive and share much less information, said Szkonyi, who concludes from this that the system not only destroys their opponents but also those wishing to live within the framework of the system.

Magyar insists that Hungary does not have a classical mafia, but rather a state mafia, adding that a mafia is not made up of people who murder for fun but a rational congregation.  What the mafia solves with violence and threats, the mafia state solves through legislation, says Magyar.  It is not possible to preside over everything in this manner.  As an example he pointed out that they were not able to take over RTL Klub, “but they are still working on it.”  The same applies to the courts, said Magyar, who believes the system is not driven by ideology but rather utilizes ideology.

Before G-day “Simicska and company were willing to bow down even for public contracts in the tens of millions.”  After G-nap, however, the Simicska empire was fragmented, and “the various interest groups tried to rip the juicy morsels out of one another’s mouths.”  He said that a good example of this is Budapest Real Estate Usage and Development Nyrt. (BIF), which was founded by the late husband of Fidesz court historian and Terror House director Mária Schmidt, who inherited his shares.  Martin points out that banking and media magnate Zoltán Spéder, who was forced to sell off his shares in BIF, is an example of one who was forced out of the circle of oligarchs, and the fact that “oligarchs come and go” somehow disqualifies Hungary from being a mafia state.

Martin believes that “the current system cannot be understood without ideology.”  He cited Klik as an example of something whose creation was ideologically driven.

Magyar believes the “the lame Lőrinc (Mészáros) has nothing that Simicska had that would enable come to convert economic assets into political power.”  Expanding on Martin’s thoughts, Magyar said there was support for the ideology that the government represented.

Magyar acknowledged that the mafia state was not monolithic, saying in that case it would be a dictatorship.  He said Hungary’s system resembled that of Russia, where Putin has created predictable relations, telling the oligarchs that they can retain their ownership except in cases when he needs it.  He believes that ideology plays a large role in this system, and that whether a given businessman was Jewish or not was of no relevance.  He said the system is not driven by ideology but uses ideology, and that if Fidesz’s system of national cooperation (NER) was in Manhattan, then it would not be anti-semitic.

Szakonyi is concerned Viktor Orbán’s so-called National System of Cooperation (NER) will not go away peacefully, and that a change of government might be brought about by a revolution involving outraged Hungarians taking to the streets.