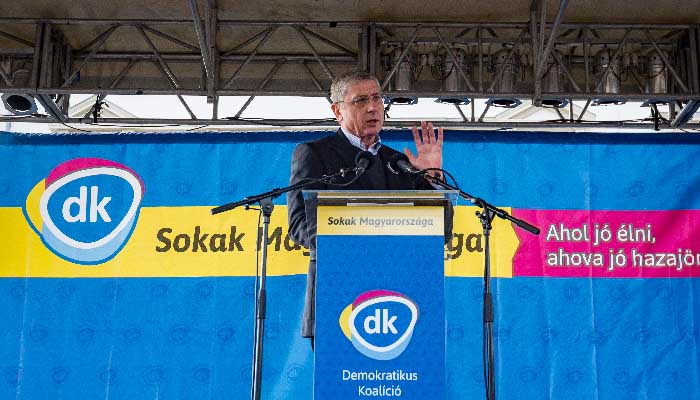 The Democratic Coalition (DK) president took part in a demonstration Monday in the Buda Castle, reports Hungarian news site propeller.hu. The demonstration was of symbolic importance because it took place on the very day that the ruling Fidesz party celebrated the five-year anniversary of Hungary’s Fundamental Law — the new constitution that was unilaterally adopted by Fidesz in 2011.

Members of the Democratic Coalition gathered atop the Castle’s hill not to celebrate but to mourn the loss of the Republic of Hungary that “lived only 22 years”.

Gyurcsány accused Fidesz, the prime minister and the president of deceiving Hungarians about the desires and hopes of the fall of communism. According to Gyurcsány, those in power now have never felt as though the country belongs to all Hungarians, rather they treat it as their own.

Corruption, despair, and the number of people leaving the country is on the rise, he said.

“We, too, believe, that enough is enough, prime minister and president,” Gyurcsány said before accusing Hungary’s highest officials of looting the country for the benefit of a few.

Being right-wing has become synonymous with sin, and supporters of the government now support that which is “unbearable and indefensible,” he said.

The former prime minister went on to say that Hungary has fallen under the control of a criminal enterprise. The assembled crowd responded to his statement by chanting, “Mafia! Mafia!”

Gyurcsány then accused Hungary’s ruling right-wing of building a national mythology around the Hungarian land, which it then sold off by the hundreds and thousands of hectares.

He said the prosecutor’s office is not willing to prosecute the perpetrators of the Quaestor brokerage collapse, something that will result in the crime going unpunished.

Gyurcsány asked whether some secret deal had been struck between those in power and the former CEO of Quaestor, Csaba Tarsoly — a deal in which Tarsoly would keep secret his knowledge of their “criminal financial dealings.”

The National Bank of Hungary (MNB) has made billions on the misery of those who held foreign currency-denominated mortgages and spends lavishly while those stuck with the loans are left to suffer, Gyurcsány said.

The MNB chairman is a criminal and should be held accountable if there is even the slightest bit of honor in the country, Gyurcsány said. This prompted the crowd to chant, “Prison! Prison!”

He said Hungary’s democratic majority must remain strong and not tolerate the continuous “dishonoring” of the country, and must seek to change the system through legal means.

Gyurcsány then reflected on his own time in government and said he was never caught up in something that would have compromised his respectability. The problems back then were problems with the system, he said.

The current system, Gyurcsány reasoned, is premised on crime.

He said he feels it is his patriotic and moral duty to try and defeat “this evil”, but that a broad coalition of democrats is needed. He called on left-wing parties to put aside their past grievances and come together.

It is in the interest of this country that this tyrant fail, Gyurcsány said.

Mária Sándor, the black-dressed nurse, also spoke at the event. She said the prime minister wants to relocate his offices to the Castle District because he “has money for everything”, while there are those who leave the country because their future is uncertain and they can’t even pay their bills.

László Kiss, a nurse who spoke with Sándor, called on the government to lead Hungarian nurses and doctors back to Hungary because the country needs them.

Those who attended the Democratic Coalition event filled the area between the Sándor Palace and Buda Castle Palace. Event-goers carried Hungarian flags, EU flags and political party flags. They held signs that read, “Put an end to this tyrant!”, “A new constitution for Hungary!”, “We are protesting against the Orbán regime. You too, right?”, and “A new change of system for European democracy!”