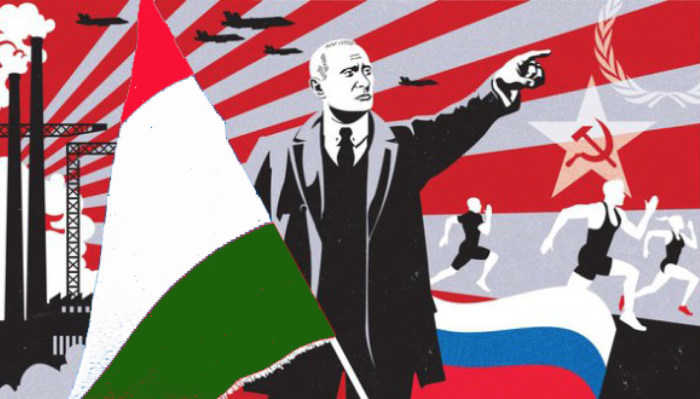 Hungarian pro-government daily newspaper Magyar Idők published an article this week on an alleged plot by George Soros and the Clinton family to start a “Purple Revolution” against the US government, listing Strategic Culture, a Kremlin-backed propaganda news site, as one of the authors.

Magyar Idők (Hungarian Times), which is owned by Mediaworks CEO Gábor Liszkay, published a shortened version of a piece that appeared on the Strategic Culture website on November 11. This was the first time the pro-government print daily formally gave a Russian propaganda website a byline.

Strategic Culture and another English-language website, New Eastern Outlook, are not formally associated with the Russian government but are known to be Kremlin-backed Russian propaganda outlets targeting foreign audiences. New Eastern Outlook is affiliated with the Russian Academy of Sciences. Some of their articles are picked up by international far-right websites, such as Voltaire Network.

New Eastern Outlook is highly popular with Fidesz media outlets. Magyar Hirlap (Hungarian Gazette), a daily newspaper owned by pro-Fidesz oligarch Gábor Széles, cited the website in an April article on the alleged connection between the migrant crisis and “think-tanks close to NATO.”

Moreover, 888.hu has mentioned the website ten times in its international media reviews since December 2015. In October, several Fidesz-backed outlets published articles about a New Eastern Outlook piece by William Engdahl suggesting that Orban should be a candidate for the Nobel Peace Prize.

Content from official Russian state-financed websites, such as Sputnik and Russia Today, has also been increasingly appearing in pro-Fidesz websites. These official Russian sites are used especially for coverage of the war in Syria and the refugee crisis.

Hungarian outlets use Russian propaganda on themes close to Fidesz’s own narrative about Western intervention in domestic politics. Russian propaganda stories focusing on George Soros, the financier and philanthropist of the Open Society Foundation, and the threat of Western-backed ‘color revolutions’ overthrowing governments tend to make their way into Fidesz media.

Fidesz-friendly outlets appear not to be concerned about the impact of publishing Russian propaganda content on their websites. In response to Népszava (People’s Voice) pointing out that New Eastern Outlook’s office is based in Moscow, the editors of 888.hu announced that the portal’s “address — whether it be in New York, London, Paris or Tel Aviv — is something we do not check, because what matters is the content of the news or opinion piece.”

Some Hungarian far-right websites have long had a close relationship with Russia. But the Fidesz media’s growing affinity for Russian media, as well as Magyar Idők’s decision to give Strategic Culture a byline, may be an indication of growing Russian influence over Hungarian media and society.