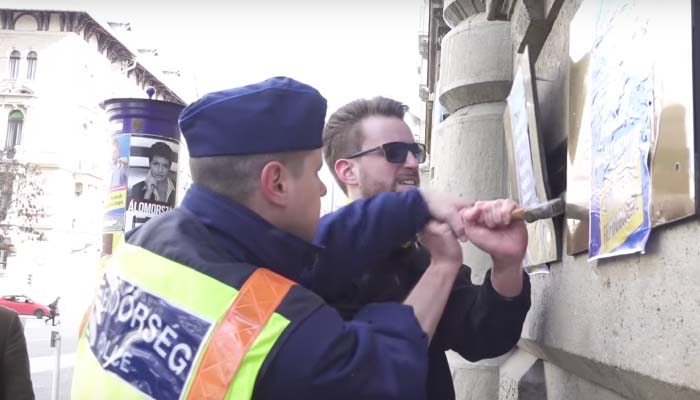 Civil activist Márton Gulyás has been charged with criminal vandalism for removing a sign from the exterior of the National Election Office on Wednesday. Gulyás, who also produces the YouTube show Slejm, arrived at the office on Wednesday, one day after a group of muscle-bound skinheads with ties to ruling party Fidesz prevented an opposition politician from submitting a referendum question concerning Hungary’s mandatory Sunday store closure law.

Gulyás and others were adhering small signs on the National Election Office which read “Due to the public administration reforms and in the interest of preventing further acts of disorderly conduct, this agency is now closed. Democracy has been suspended.”

Police arrived and politely asked the activists to stop putting up the posters.

“I’m just going to finish putting this one up and then I’ll stop,” one activist told a confused policeman.

It was toward the end of the activist stunt that Gulyás grabbed a hammer and pried the National Election Office sign off the building.

A police officer tried, albeit half-heartedly, to stop him but the sign came off relatively easily. Gulyás said on ATV’s Egyenes Beszéd (Straight Talk) Thursday night that he has been charged with criminal vandalism and a kind of disorderly conduct “against the community that could potentially provoke fear and alarm in others”.

He told hostess Olga Kálmán that it is hard to make sense of the police action against him if one compares his act of civil disobedience with Tuesday’s fiasco at the National Election Office when the beefy skinheads prevented a citizen from exercising his right to take part in the democratic process.

Gulyás said he is charged with criminal vandalism because police claim the value of the sign he removed is HUF 51,724 (USD 180), namely HUF 1,000 (USD 3.50) over the threshold separating misdemeanor vandalism from criminal vandalism. He said he is confident the judge will consult with experts about the value and it will turn out to cost much less than the police say.

“Fidesz has suspended democracy in Hungary. As long as this is the case, these institutions have no meaning and they do not serve their intended purpose. They do not provide any service to the nation.”