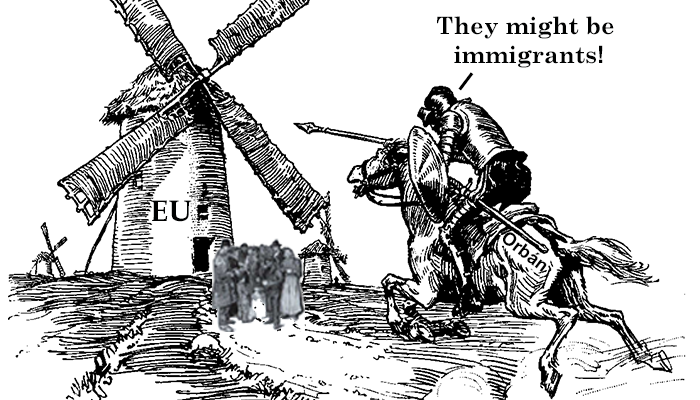 So much for European solidarity. Hungarian ruling alliance Fidesz-KDNP has teamed up with far-right Jobbik to adopt a law written by Fidesz requiring the government to sue its way out of having to take part in the European Union’s refugee quota system.

The Hungarian parliament has voted in favor of the Fidesz-KDNP proposal requiring the government to challenge the quota system (for distributing refugees throughout EU member states) in European courts. According to the proposal’s text, the European Union never allowed the parliaments of Member States an opportunity to express their own opinions, and anyway, the proposal argues, the EU’s quota system is unlawful.

Hungarian news site Index.hu reports the final vote came down to 154 in favor, 41 against and one abstention. Fidesz, KDNP and Jobbik voted in favor of the lawsuit (as did independent MP Péter Kónya).

Hungarian Socialist Party (MSZP) and Politics Can Be Different (LMP) parliamentary delegations voted against, as did independent members of parliament affiliated with opposition parties Democratic Coalition (DK), Together (Együtt), Dialogue for Hungary (PM), and the Hungarian Liberal Party (MLP).

Independent MP Zoltán Kész was the only abstention.

Speaking before the vote, Jjustice Minister László Trócsányi said the lawsuit could set a precedent. It would be filed officially in December.

On Monday, Prime Minister Viktor Orbán said that as long as he remains head of government, Hungary will not receive a single refugee under the quota system or accept send-backs under the Dublin Regulation.

Orbán (and the Hungarian government) have for months publicly rejected the notion of a mandatory quota system and have been expressing their desire to challenge any such system in European courts.

The Prime Minister thinks that a quota system is an open invitation to all immigrants, and would spell the end of the Schengen Zone and free movement in Europe.

In a speech delivered yesterday to parliament, Orbán said “the mandatory quota is dangerous because it would spread terrorism throughout all of Europe” and it “goes against the spirit of Europe”.

The European Commission’s mandatory quota system essentially comes down to this: 120,000 refugees would be distributed among EU Member States based on factors such as GDP, population, unemployment rate, etc. Hungary has opposed this plan from the very outset.

In late September, the council of European interior ministers voted in favor (with a qualified majority) to distribute the refugees amongst EU Member States.  Apart from Hungary, three other countries voted against the idea (Slovakia, the Czech Republic and Romania) and one country, Finland, abstained.

According to Index.hu, Hungary would have to take anywhere between 1,000 and 1,300 refugees under the plan, or roughly one refugee for every three settlements in Hungary.