While the final results will not be known until Saturday (some 250,000 votes cast abroad will only be counted later this week), based on returns as of 8am Monday morning, Fidesz and its Christian Democratic People’s Party (KDNP) partner won a landslide victory in Sunday’s general election. Receiving just over 48 percent of votes cast, and winning the vast majority of individual electoral districts, the Fidesz-KDNP political alliance led by Viktor Orbán looks certain to control at least two-thirds of the seats in parliament. 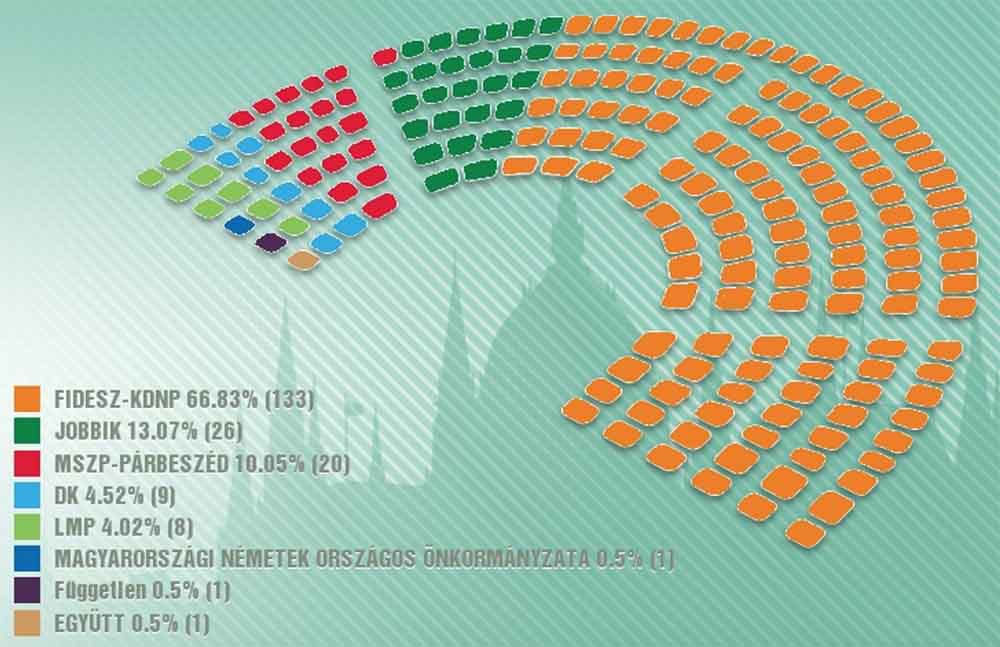 As in the case of the second (2010-2014) and third (2014-2018) Orbán governments, a parliamentary supermajority will enable the new government to appoint party loyalists to key posts, including the supreme court and the chief prosecutor’s office, and overhaul the judiciary without the support of the political opposition. It will also enable Prime Minister Orbán to modify Hungary’s constitution, the Fundamental Law, at will.

Hungary’s democratic opposition appears to have won election to parliament in 12 out of Budapest’s 18 electoral districts. Despite candidate coordination between two of the largest leftwing constellations, the Hungarian Socialist Party and Dialogue for Hungary (MSZP-P) political alliance and the Democratic Coalition (DK), and a flurry of last-minute withdrawals and cross-party candidate endorsements, the democratic opposition only managed to win two electoral districts outside the capital.

In the southern city of Pécs, independent candidate Tamás Mellár emerged victorious.  In Veszprém, where there was no coordination of candidates among the democratic opposition, Zoltán Kész came in second to the Fidesz-KDNP candidate, Péter Ovádi, losing by more than 19 percent, with the remainder of votes split between Momentum, LMP, and Jobbik candidates.

Jobbik, Hungary’s radical rightwing party, which was expected to win at least four electoral districts in the countryside, ended up winning just one. Neither Jobbik chairman Gábor Vona nor LMP co-chair Bernadett Szél managed to win direct election to parliament in their respective electoral districts.

As of the publication of this article, based on 97 percent of the vote, the following are the results of Hungary’s 2018 general election:

Votes for national lists of candidates:

Allocation of seats in Hungary’s next parliament:

Given that the German national local government representative is a former Fidesz politician, Fidesz will effectively enjoy a parliamentary supermajority, even if votes coming from abroad should alter the election results.

To Viktor go the spoils

Addressing Fidesz and KDNP party faithful, Viktor Orbán announced that the governing political alliance had achieved a “fate-deciding victory” in which “we got a chance to defend Hungary.”

“Hungary is not yet where we would like it to be, but it has already started out on the path it has chosen for itself. Together we will travel this path to the end,” announced the jubilant Fidesz chairman to rapturous applause.

In a remarkably subdued speech delivered shortly before midnight, Jobbik chairman Gábor Vona announced that he would resign his position the following day, pointing out that Jobbik remains Hungary’s second-largest party and had actually received 100,000 more votes than four years earlier.

At a press conference held after midnight, a visibly distraught Gergely Karácsony said the he could not congratulate Fidesz given the “lies, media imbalance, and electoral system” behind the governing party’s victory. He also announced that the Hungarian center-left had to rebuild leftwing democratic politics from the ground up.

At the same press conference, MSZP chairman Gyula Molnár announced the resignation of the MSZP leadership despite his personally winning election to parliament in Budapest’s 18th electoral district.

At a separate press conference, Democratic Coalition chairman Ferenc Gyurcsány expressed his disappointment in the election results, and bemoaned the fact that Hungary’s democratic opposition had yet to find anything with which to counteract Fidesz’s anti-immigration propaganda.

“We have to work twice as much and twice as hard for Hungary in the future than we have struggled so far,” announced LMP co-chair Bernadett Szél, adding that “there are big problems in this country.”

LMP co-chair Ákos Hadházy called on democratic opposition supporters not to be upset with Fidesz supporters, 60 percent of which are only reached by government propaganda. Hadhazy subsequently resigned his party leadership position.

Momentum chairman András Fekete-Győr expressed his disappointment over Momentum failing to enter parliament.  Saying  the current political opposition was incapable of changing the system, he said his party would regroup and prepare for the 2018 European parliamentary and municipal elections.  “Don’t believe that this system will last until 2022. We won’t let it!” he assured his visibly disappointed followers.

In light of Együtt’s failure to enter parliament (Együtt candidate Szabolcs Szabó will be seated as an independent), Együtt chairman Péter Juhász announced the resignation of his party’s leadership. He expressed his concern to the Budapest Beacon over the fact that, having failed to receive at least one percent of the vote, his party will be required to return some HUF 150 million (USD 600,000) in public campaign funds for which he and other presidium members are personally liable.

Hungary’s Two-Tailed Dog Party, which garnered significantly more votes than Együtt, reacted to the results by announcing plans to open negotiations with opposition parties regarding candidate coordination the day after the election.