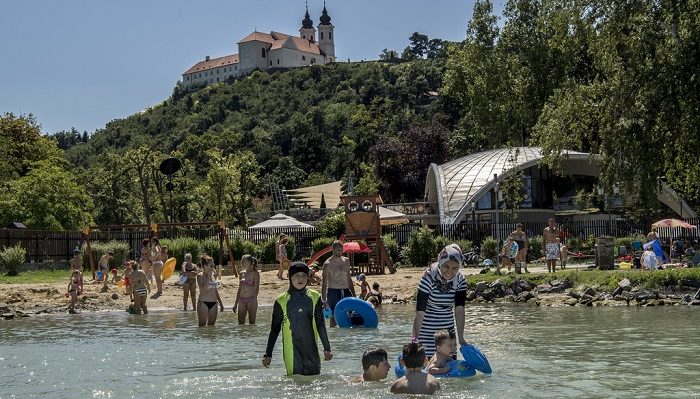 Local Fidesz mayors and MPs have criticized a plan by a Hungarian aid organization to provide temporary vacation accommodation for refugees near Lake Balaton. Fidesz politicians (and pro-government media lapdogs) claim news of refugee families at public beaches “caused a panic” in the local population. Some mayors vow to prevent the refugees from holidaying in their towns, while others claim the “violent settlement” of the families is all part of the “Soros plan.”

In late July, Hungarian aid organization Migration Aid made an online call for volunteers to assist in preparing a site near Lake Balaton where refugee families could spend some weeks of relaxation. Migration Aid planned to “provide refugee families who were released from the transit [zones] with tranquil surroundings for a few weeks to help overcome their traumas” in the form of three small summer cottages on a plot of land donated by its Austrian owner. According to Migration Aid, the organization would cover part of the costs of room, board and activities for the refugee families, while the rest would be provided by “several Austrian donors.”

But around a week later, news of the plan broke in the pro-government media, sparking a flurry of xenophobic opposition among local Fidesz mayors and members of parliament. When a report from Zala county newspaper Zala Hirlap confirmed that the site of the vacation would be near the village of Zalavár, 10 kilometers from the lakeside city of Keszthely, Zalavár mayor Ildikó Horváth told the paper that “I will serve the interests of the residents of this village in the issue.”

Keszthely mayor Ferenc Ruzsics went further, declaring that he would explore all legal possibilities to prevent the refugees from receiving accommodation in the area.

“We agreed with my fellow mayors that insofar as these things are going to happen around us and we can’t prevent them using legal means, we will definitely organize some kind of protest or mobilization,” Ruzsics told Zala Hirlap. “We want to make it known that we absolutely do not agree with this. Not just that it should not be in Keszthely and its surroundings, it shouldn’t be anywhere in Hungary.”

Gábor Papp, Fidesz mayor of Hévíz, a resort town near Keszthely, declared on the city council’s Facebook page that Migration Aid’s plan threatened to “violently, short-sightedly damage a city, a region and a country.” Papp added that he wouldn’t be surprised “if the whole story is just a provocation, and they just want to antagonize the Hungarian people.”

Fidesz MP from Keszthely Jenő Manninger also warned against refugees visiting Balaton on his Facebook page, where he declared “the George Soros-tied organization Migration Aid will settle migrants in the Keszthely area. The news understandably caused a panic in the locals, which is why I immediately requested information from the authorities. We are aware that this is a part of the Soros plan. The issue is worth special attention because it can’t be ruled out that this organized camp could be the path to [refugee] resettlement later.”

Manninger’s post was later deleted due to a high amount of comments Manninger claimed “showed the sign of an organized action.”

According to Article XXVII (1) of Hungary’s Fundamental Law,

“Everyone who legally resides in the territory of Hungary has the right to move freely and to choose freely his place of residence.”

According to Migration Aid operations coordinator András Siewert, the refugees in question “reside in Hungary and would like to stay here, they are trying to integrate here, but they aren’t in a material situation where they could afford this [kind of vacation].” All members of the families have received their legal status as refugees or protected persons in Hungary, Siewert said.

Siewert told the Budapest Beacon that many of the adults in refugee families are working or searching for work, and therefore cannot always allow themselves a longer term vacation.

Promises on the part of Fidesz politicians to prevent such holidays from taking place amount to public incitement to breaches of those constitutional guarantees, and on a single obvious basis: that the individuals in question are Muslim.

“Hévíz gladly receives GUESTS arriving from any part of the world,” Hévíz mayor Gábor Papp wrote in his statement on the city council’s Facebook page. “Just last month we did so with Transcarpathian and Transylvanian children and their parents.”

Papp argued that the Migration Aid plan to provide a vacation for refugees was congruent with the EU’s so-called resettlement quota system, in which EU Member States would be required to take over a certain number of asylum applications from overburdened countries. (Hungary would have been required to accept less than 1,300 asylum seekers, but refused.) Papp reminded Migration Aid that the Hévíz city council “unanimously voted on every occasion to reject the quota system.”

Keszthely mayor Ferenc Ruzsics also conflated a summer vacation with forced refugee resettlement when he told Zala Hirlap, “This organization (Migration Aid) is dangerous from the perspective that its activities are part of the Soros plan.”

In response to the numerous attacks by Fidesz politicians and pro-government media, Migration Aid released an open letter detailing the long and arduous procedure undergone by refugees and asylum seekers before receiving their status. Migration Aid also emphasized that those refugees who are under the protection of the Hungarian state and possess residence permits are not “migrants,” and urged politicians like “representative Manninger and Mayor Ferenc Ruzsics to request a briefing from…the Interior Ministry and the Immigration and Asylum office, because if they really believe what they are saying then there are serious professional deficiencies in this area.”

“The gentlemen of the governing party should consult with one another and come to an agreement on what they want,” the letter continues. “If the authorized office gives legal status to a foreign citizen, is that person’s integration into Hungarian society important or not? Because if so – and we can conclude from this that the Hungarian government intends to spend substantial amounts each year in support of integration projects – then they should be happy that there are Hungarian citizens among us who are happy to help, which would substantially reduce state expenditures on integration.”

We’re not afraid, the neighbors are Austrians and Germans

Migration Aid coordinator András Siewert told the Budapest Beacon that he regrets that “the responsible Hungarian leaders, mayors and politicians are making statements which show that they don’t even respect the basic laws of our land. We’d be glad if the involved politicians would stand before the public and explain to us, Hungarian citizens, how they imagine the integration of those people admitted by the Hungarian state.”

Siewert said that due to the recent record-breaking heatwave, the preparation of the summer cottages has been temporarily postponed, but that his organization is undeterred and will soon implement the project. When asked by Zala Hirlap whether Migration Aid worried about a negative response to the project from locals, Siewert responded, “We’re not afraid of that because the area where we have [this property] is on the edge of a town, and also because the neighbors are Austrians and Germans.”