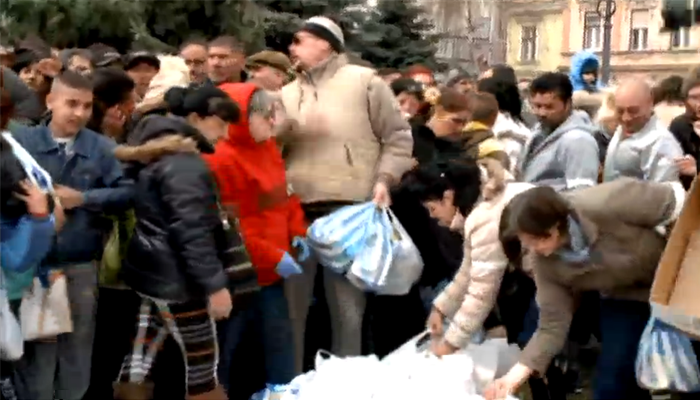 A bread riot nearly broke out in the northern Hungarian city of Miskolc on Saturday when food packets distributed by a local NGO to families with children fell far short of demand.

The “Miskolc has a Voice” civil organization distributed food after the mayor’s office refused to allow the Feed the Children Foundation to distribute food on the grounds that it would make the northern Hungarian city look bad (as though last year’s images of bulldozers demolishing impoverished Roma neighborhoods had done much to improve the city’s image-ed.).  In a letter addressed to the foundation Miskolc mayor Ákos Kriza (Fidesz) wrote that he preferred for the northern Hungarian city to be known for the considerable progress and numerous improvements made under his administration.

Ten minutes into the food distribution, a riot nearly broke out when food packets started running out despite thousands of people standing in line for an hour. ATV reports that a number of hopeful food recipients sent their children home for fear that they might be crushed in the chaos that ensued when, fearful of leaving empty handed, the crowd took matter into its own hands and helped itself to while distribution organizers haplessly watched on.

Socialist MP Lászó Varga sharply criticized Kriza for refusing to assist NGO efforts to distribute food to hungry families in Miskolc, telling ATV that such “inhuman” letters are written by people  “who do not visit certain parts of the city” and “refuse to acknowledge the reality of the situation.”

Varga said it was necessary to examine whether impoverished children had access to warm food at least once a day as” obviously the present system doesn’t work”, adding that “there was a need for this food distribution.”

After Saturday’s food riot, Kriza accused the NGO of deliberately staging a negative publicity event and of causing hundreds of thousands of forints worth of future damage.  He insists that future food distribution be held outside of the city.