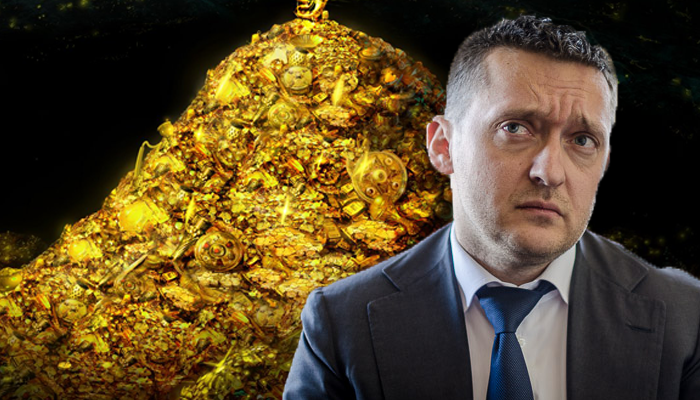 Like his boss, prime minister Viktor Orban, Fidesz MP Antal Rogan is a career Fidesz politician.  After winning a degree in finance in 1995 he went to work for the Hungarian National Bank.  He joined Fidesz in 1996.  The following year he was a founding member of Fidesz’ youth organization (Fidelitas).  In reward for his service to the party, Rogan won a place on the Fidesz national list, whence he entered parliament in 1998.  In 2002 he was elected to the 5th district’s city council where he served as head of the Fidesz faction.  In 2006 he was both re-elected to parliament and elected mayor of the 5th district.  Since 2010 he has served as the chairman of the parliamentary committee on economics.  For the past two years he has served as the head of the Fidesz parliamentary delegation.

On 21 March Rogan felt compelled to modify his official declaration of assets after a left-wing youth movement announced that, according to Land Office records, Antal Rogan was the 100% owner of a 149 sqm luxury flat in the Buda hills and not the 50% owner as previously declared.

On 26 March Hungarian news site 444.hu reported that the modified declaration indicated a significant increase in Rogan’s personal wealth.  Rogan responded by stating that modifying a previously submitted declaration of assets is not unlawful, and justified the modification on grounds that other politicians had done the same in the past.

Public figures are required to declare their personal assets once a year.  Open to the public, the declarations of prominent politicians are invariably scrutinized by the Hungarian press and their political opponents.  Personal asset declarations have taken on a new significance since it was revealed in January that MSZP deputy chairman and MP Gabor Simon had failed to declare some HUF 240 million kept in an Austrian bank account.  In the ensuing scandal, Gabor Simon had little choice but to resign all of his Socialist Party positions as well as his seat in parliament.  Two weeks ago Simon was taken into custody for allegedly using a fake passport to open a bank account at a Budapest bank.  Simon, who is being held in preventive custody, has denied the allegations.

News of his arrest and undeclared bank accounts has seriously eroded support for the Hungarian Socialist Party and the United Opposition in the run up to the national parliamentary election scheduled for April 6.

Nothing to see here except a healthy relationship with my wife

It was subsequently revealed that Rogan’s wife, Cecilia Gaal-Rogan, really is part owner of a property in the exclusive Buda community, despite being a housewife with no income of her own.  She shares ownership of a neighboring flat with the girlfriend of Budapest 5th District Deputy Mayor Andras Puskas.   Puskas and girlfriend live together in the same community in a different flat co-owned by the couple.

Rogan’s wife owns 52 percent of a neighboring 149 m² condo. Property records indicate that both properties were purchased with the proceeds of a EUR 111 000 mortgage loan in Antal’s name, and an HUF 30 million mortgage loan in Cecilia’s name.

On 28 March Antal Rogan held a press conference in which he criticized his political opponents for raising suspicions. Rogan said that the neighboring unit was purchased after their second child was born in 2012 so “they could extend (their) own unit by an additional two rooms”.

On 1 April Tuesday Rogan released a statement to the effect that his family owes HUF 60 million to the banks, and that he has been receiving financial support from family and friends. What he did not say was how much.

The United Opposition strikes back

On 29 March Together 2014 co-chairman Peter Juhasz visited the exclusive community. In a video recorded of the visitation, Juhasz points out inconsistencies in Rogan’s story, including the part about acquiring half of the neighboring flat for the purpose of adding two more bedrooms to their 149 sqm. (According to Juhasz, one unit is situated on the first floor of building B, the other unit is on the third floor of building C).

At the end of YouTube video, Juhasz says, “We are very very eager to hear Rogan’s excuse for lying to the citizens over the past four years. We’re also eager to hear about how he came to acquire such significant asset holdings and why he didn’t disclose its size sooner. We’d also like to know the source of these assets, because it’s strange that both the mayor and the deputy mayor of Budapest’s 5th are co-owners of properties valued at HUF 300 million (USD 1 350 000) in this community alone….”

BREAKING! Antal Rogan has modified his declarations after four years! In less than one week he has declared close to HUF 100 million in assets, albeit 3-4 years late!

Previously secret assets which are now disclosed include:

– The correct total area of his condo

– an automobile garage, and a storage unit.

So we now know what Rogan owns in this condo complex, but we haven’t yet heard how he got it! We don’t see how he and his deputy mayor have acquired more than HUF 300 million in assets over last 5 years.

We are still waiting for an explanation.

The post ends with a link to Antal Rogan’s 2014 declaration of assets. It turns out Rogan modified his asset declaration yet again on 31 March to reflect additional previously undisclosed assets.

Keeping up with the neighbors

Later that day it was revealed by 444.hu that Fidesz MP and Minister of the National Economy, Mihaly Varga also owns a flat in the same luxury gated community, as well as Csaba Csetenyi, co-owner of a company that has won a number of government tenders and of a company that owns a number of tobacco shops.

Varga reportedly spent part of April Fool’s day modifying his declaration of personal assets to include previously undisclosed assets related to the luxury flat.  Apparently even politicians with finance degrees have difficulty keeping track of their personal assets!

In addition to owning shares in BIF, Speder’s bank provided the financing used by Mrs. Rogan to acquire one of the flats.

Speder’s Bank, FHB, is one of the owners of the company which purchased the government’s majority shares in the Takarekbank earlier this year.  Rogan’s committee played a crucial role in the decision to nationalize and then reprivatize the bank that involved effectively depriving scores of credit unions (and their owners) of their ownership interest in the Takarekbank.

With so many assets who can keep track?

On the morning of 2 April Peter Juhasz and the Democratic Coalition candidate for parliament Szabolcs Kerek-Barczy visited Budapest 5th district’s city hall and demanded to see Rogan’s declaration of assets .  They determined that Rogan had neglected to mention a 95 sqm roof terrace and his share of communally owned property, altogether worth a reported HUF 25 million.  Origio.hu reports that Rogan also neglected to report a one quarter ownership interest in two homes in the countryside he inherited from his father and grandmother.

Although Rogan has twice modified his 2014 declaration of assets, he has not yet modified his declarations for the years 2010 through 2013. A legal expert tells the Budapest Beacon that Rogan’s failure to provide accurate information on this scale amounts to fraud.  However, it remains to be seen whether the parliamentary committee on immunity and prosecutors will take the same interest in Rogan as Simon.