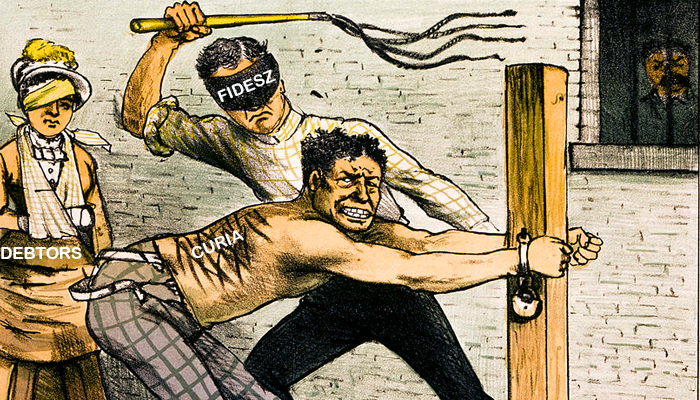 In October Fidesz threatened to act if the banks failed to solve the foreign currency debt problem on their own by 1 November.  Banks responded that this was not possible without the active cooperation of both parliament and the Central Bank.

After the 1 November deadline lapsed, the government justified further inaction on the grounds that the Curia (formerly known as the Supreme Court) first needed to rule on whether such contracts were legally valid before the government could act.

On Monday, 16 December, Hungary’s highest court ruled that foreign currency based loan agreements in which the borrower assumes all the exchange rate risk are neither illegal, unethical, nor usurious.  Since then various Fidesz leaders have condemned the Curia’s decision as “cowardly” and “irresponsible.”

Portoflio.hu published the following detailed summary of the ruling:

1. Loan contracts denominated in foreign currencies are agreements that enabled borrowers to take advantage of more favorable interest rates compared with forint loans, therefore all risks associated with currency rate fluctuations are to be borne by the borrower.

2. The risks associated with exchange rate fluctuation alone do not constitute sufficient grounds for invalidating such contracts as being illegitimate, unethical, usurious, or false. The risks alone do not render the service as non-viable. The unforeseeable shift in the financial burden in itself does not render the agreement null and void.

3. Financial institutions were required to inform clients on the possibility of currency rate changes, and its impact on the monthly payments due.

5. Should one of the terms and conditions of a contract be found null and void, the contract remains binding in all other respects.

6. As concerns one-sided amendments to the contracts by the lender, the Curia defers its decision until the European Court of Justice reaches a preliminary ruling on the issue.

7. Court verdicts are intended by the law as a means of rectifying individual cases in which the change of circumstances resulted in substantial disadvantage to one of the parties. They are not suitable to rectify contracts on a massive scale. If legislation is made to amend the disadvantageous consequences, such legislation leaves no room for individual judiciary deliberation.

First to attack the court for its decision was Fidesz parliamentary faction leader Antal Rogan who told the press on Tuesday “we’re disappointed because the highest legal body . . . took the side of the banks.”

Rogan’s sentiments were echoed on Wednesday by Parliamentary President Laszlo Kover who denounced the decision as “cowardly” and accused the court of “playing for time” and “avoiding responsibility”.

“The members of the justice authorities could learn from the example of neighboring countries whose courts have taken the side of its own citizens in similar matters, and not that of foreign-owned banks” Kover told reporters. “About the banks it is important not to forget that they make extra profit, who their owners are, and how much money they have sucked out of Hungary, and how indifferent they are to the cost.”

(A number of respected economists, including Laszlo Bekesi and Peter Rona, dispute the notion that the “foreign owned” banks have “sucked money out of Hungary”, pointing out that heavy losses of the past few years, compounded by high sectoral taxes, have compelled bank owners to replace lost capital with new capital in the billions of euros.)

Not one to pull punches, Kover went on to say that one of the “crimes” of the “post-communist left-liberal” governments is that “there is no Hungarian-owned bank sector in Hungary” and that “the country is at the mercy of the international banking world” (by which he means International Jewry according to MDF chairman Karoly Herenyi).

Kover overlooks the fact that 29 per cent of the shares in OTP, Hungary’s largest bank, are owned by Hungarians, that the bank is run exclusively by Hungarians, and that OTP was one of the largest underwriters of foreign currency denominated loans.

“If these contracts don’t violate good ethics then there is no point in passing laws because there are no good ethics in Hungary” the President of the Parliament told the press.

(Many would argue this applies to many of the laws passed this year by the Fidesz-KDNP controlled parliament over which Kover presides.)

On Thursday Fidesz Vice-Chairman Lajos Kosa added his voice to the chorus of critics, calling the decision “cowardly” and claiming it raises “uncertainties” about Hungary’s judicial system.

“As banks already have massive support, we continue to support the people.”

The Prime Minister said he agreed with those who are pressing the Curia for a decision on the issue of currency rate margins and one-sided modifications to mortgage contracts without the debtor’s consent. “We are waiting to see a legal opinion on the legitimacy of these, and once it is available we will have a clear picture from the legal point of view enabling us to take the necessary steps,” Orban said.  He declined to comment as to what such steps might include, claiming it is too early to say.

Portfolio.hu reports that the issue of foreign currency loans will be discussed in a cabinet meeting scheduled for Monday with the objective in mind of lowering borrowers’ monthly mortgage payment obligations by 17 per cent to 20 per cent.

(Editor:  It seems to us that Hungary’s highest court demonstrated courage by issuing a decision that upholds the rule of law and the sanctity of contracts entered into freely by consenting parties).