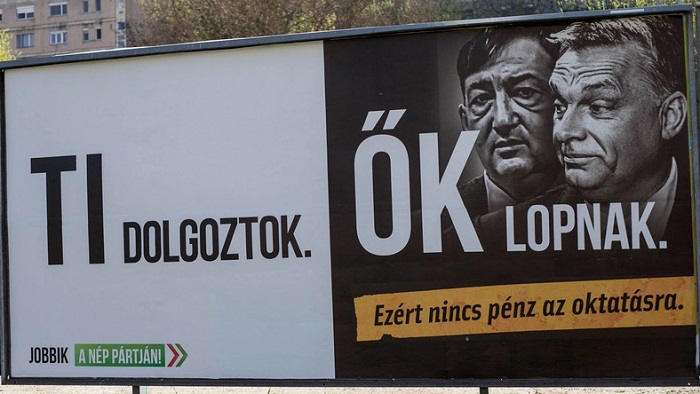 Fidesz MPs Lajos Kósa and János Halász have proposed a bill that, by their own admission, targets oligarch-in-exile Lajos Simicska’s outdoor billboard business.

According to the bill, “there have been numerous instances in which the suspicion has arisen that billionaires and the financial groups tied to them are attempting to influence democratic elections and distort the odds of candidates taking part in the elections. In addition to endangering the cleanliness of elections, this also raises the suspicion of hidden party financing and the risk of corruption.”

The bill’s authors are referring to Simicska’s billboards around the country, on which radical-right party Jobbik is currently running an intense anti-Fidesz campaign.

24.hu reports that the Fidesz bill would draw a distinction between billboards erected during campaign season and those erected outside campaign season.

Fidesz appears to be worried that Simicska’s vast billboard empire would be used against them — not unlike the way it was used against the opposition when Simicska and Prime Minister Viktor Orbán were still in cahoots with each other.

Kósa and Halász’s bill would consider billboard companies providing advertising space for below-market value during political campaigns to be “restricted party financing.” Such tactics would be considered an “unlawful obtaining of wealth,” and the parties which were beneficiaries of the cheaper advertising would be required to pay into the state budget the difference between what they paid to the advertiser and the fair market value. Late payment of the penalty would be recovered as a tax lien, and the party’s state funding would be decreased by the amount sought as part of the recovery.

The billboards and outdoor ad columns bear the text “You work, they steal,” and pair photographs of pro-government media baron and Orbán’s unofficial adviser Árpád Habony with propaganda minister Antal Rogán, and Orbán with his personal friend and multi-millionaire businessman Lőrinc Mészáros. A line at the bottom of the ads bears alternating messages, including “This is why there is no money for education,” “This is why healthcare is dying,” and “This is why pensions are low.”