Russmedia CEE, eastern Hungary’s most important publishing company, has been sold to a business interest closely connected to the ruling Fidesz party. With the sale, each of Hungary’s 18 daily county newspapers is now owned by Fidesz-connected oligarchs, either directly or indirectly. Meanwhile, Prime Minister Orbán promises an assault on what little remains of independent media in Hungary.

VCP is owned by Austrian businessman Heinrich Pecina (below), a figure lurking in the financial background of Fidesz for a number of years. Pecina’s company owned Népszabadság publisher Mediaworks when the latter suddenly suspended operations of the 60-year-old paper last October before being acquired by Opimus Press Zrt. That company is listed on the Budapest Stock Exchange. and its largest shareholder is former gas-pipe fitter-turned-EU fund wunderkind Lőrinc Mészáros, a childhood friend of Viktor Orbán who many believe serves as the prime minister’s proxy in business matters.

After a cursory evaluation of the economic feasibility of restarting Népszabadság, Mediaworks declined to resuscitate Hungary’s most important opposition daily, to no one’s surprise. 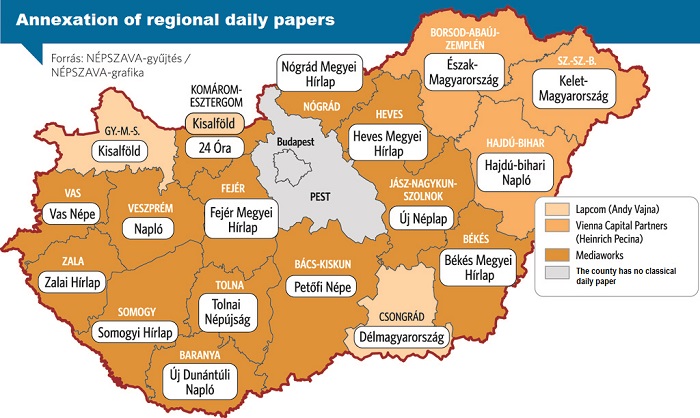 Russmedia distributes 105,000 copies in the country’s three eastern counties daily: 35,000 copies of Észak-Magyarország, 31,000 of Napló and 38,000 of Kelet-Magyarország. (By way of comparison, prior to its suspension and closure Népszabadság’s daily circulation amounted to some 37,000 papers). Russmedia also maintained each of those papers’ online editions and produced several other free weekly publications and periodicals. The acquisition of a publisher with such substantial daily circulation represents a major victory for the ever-expanding Fidesz media empire.

Regional papers are reportedly the only profitable print media in Hungary and are far more popular and influential in the countryside and smaller cities than national publications. The Hungarian branch of Russmedia, for example, reported profits in 2014, 2015 and 2016 of HUF 106 million (USD 360,000), HUF 100 million (USD 340,000) and HUF 532 million (USD 1.8 million), respectively.

Before Pecina’s purchase of the three eastern dailies from Russmedia, the only remaining independent county paper in Hungary was the Nógrád Megyei Hirlap. But in early July, the paper’s publisher Nógrád Hírcentrum Kft. was sold to Mediaworks, bringing to 194 the number of newspapers owned by Lőrinc Mészáros.

Government film commissioner and casino magnate Andy Vajna entered the county paper market this week with the acquisition of Lapcom Kiadó Zrt., the publisher of newspapers Délmagyarország and Kisalföld, as well as the tabloid Bors. This expands Vajna’s media holdings beyond his ownership of Hungary’s second-largest commercial television station TV2 and radio station Radio 1.

Gábor Polyák, director of Hungarian media think-tank Mérték Media Monitor, told nepszava.hu that “Fidesz is motivating Pecina in a suitable way, and the fact that the last several county papers ended up under his ownership means the end of their independence.” Polyák told the liberal daily that Pecina is likely an “advanced guard” in his position as owner of the three eastern county papers, and that “either he will stay permanently as a strawman in this situation, or he’ll hand the company off at the right moment to the right person (Mészáros, Andy Vanja).”