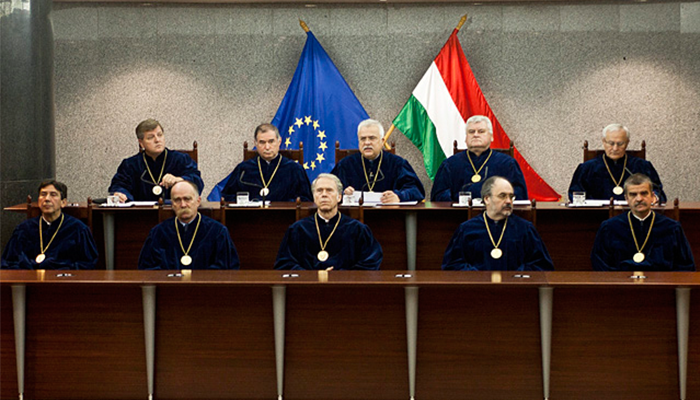 With its two-thirds parliamentary majority and right to cast five out of nine votes on the ad hoc committee responsible for appointing Constitutional Court judges, Fidesz alone can determine who is appointed to replace the departing judges. Whereas previously judges were appointed to nine-year terms, this was extended to 12 years in 2011.

That Fidesz has appointed no fewer than nine Constitutional Court judges since returning to power in 2010 was apparent in last week’s 8-7 Constitutional Court decision upholding the new law on municipal elections generally believed by independent legal and electoral experts alike to violate Hungary’s Basic Law.

The mandate of three judges (Péter Kovács, Elemér Balogh and András Bragyova) will expire this autumn. Even though they could be re-elected (the new law that prohibits judges from being re-elected does not apply to judges elected to nine-year mandates before 2009), daily news website Origo’s sources claim the three judges are unlikely to be reappointed.

President of the Constitutional Court Péter Paczolay (rear row, third from left) told pro-government Magyar Nemzet it would be useful to have a woman, a lawyer specialized in international law and a judge who has legal practice appointed to the court. It is not known at this time who the nominees will be.

Paczolay’s own mandate is due to expire as well next February. Elected Constitutional Court president in 2006 with consensual,  four-party support, Paczolay is unlikely to be re-elected. Last summer the government recalled Paczolay from the Venice Commission on the grounds that he was no longer considered “trustworthy” (even though he was subsequently elected honorary president of the Commission). Paczolay was one of the most outspoken critics of recent changes to the local electoral system favoring Fidesz.

According to Origo’s sources, András Zs. Varga (who replaced Paczolay on the Venice Commission) enjoys great support within Fidesz. He is likely to be on the short list of potential nominees to the Constitutional Court as well as a strong candidate to become its president.

Previously the members of the Constitutional Court elected their own president. However, Fidesz changed this rule so that the position is now elected by parliament with a two-thirds majority.

According to constitutional lawyer István Lövétei the import of the Constitutional Court has noticeably diminished since a law change in 2011 that voided the actio popularis, which had enabled any citizen to bring a case before the court.

These days the Court discusses significantly fewer cases. While formerly anyone could turn to the Court, after 2011 it could be done only in connection with specific legal disputes. Lövétei thinks that this is not necessarily a problem, because it will reduce the vast amount of legal cases. What worries him more is that the Constitutional Court has not raised its voice in connection with several key issues.

“Without doubt, the Constitutional Court has been much more moderate since 2011. It is less concerned with theoretical, constitutional jurisdiction and tends to be more accepting of the idea that the government’s interests are to be enforced in parliamentary legislature,” Lövétei told The Budapest Beacon. By way of example he cites the Court’s failure to oppose the special tax levied on the banks. He thinks that a stronger Constitutional Court would also have raised its voice against the nationalization of the private pension funds even though the court was not asked its opinion on this question.

Lövétei also thinks parliament is unlikely to re-elect Paczolay as president because “he was not the man of any of the parties. Paczolay from the very beginning tried to act as a mediator between the two sides, but has failed to do so once the judges supported by Fidesz formed the majority”. Lövétei says the report filed by Paczolay after the court accepted the changes to the election system “indicated he had reached the end of his patience,” in that it essentially states that the Constitutional Court had helped create an unconstitutional situation.