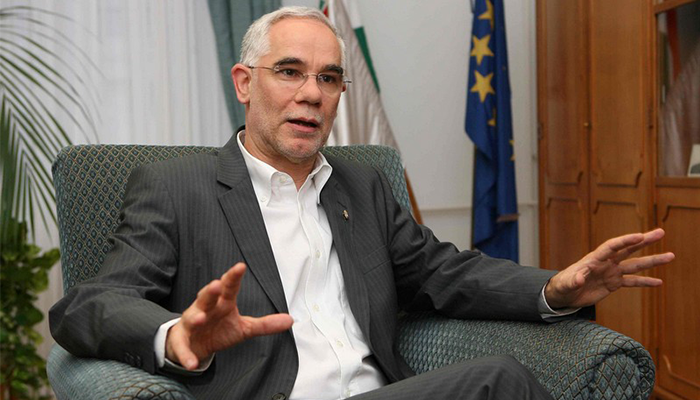 Having already bankrupted thousands of small- and medium-sized Hungarian-owned companies through the nationalization of the distribution and sale of tobacco products, it seems the government now intends to drive scores of privately owned textbook publishers and even printers out of business by nationalizing the publication, manufacture, and distribution of textbooks.

At the beginning of 2012 the Ministry for National Resources under Miklos Rethelyi studied the possibility of nationalizing the production of textbooks.  It concluded it was a bad idea that might result in yet another European Union procedure  against Hungary, as well as the loss of domestic political support.

The following year, with Rethelyi gone and Prime Minister Viktor Orban’s trusted spiritual adviser, Zoltan Balog at the head of Hungary’s largest ministry, the government created a state monopoly over the distribution of textbooks.  The result was an unmitigated disaster.

The third week of September, with tens of thousands of school children still missing hundreds of thousands of textbooks, the cabinet asked Minister Balog to formulate recommendations “in the interest of providing quality public education textbooks.”  A few days later he proposed one state owned company supply all the textbooks making generous use of EU grants.

It seems Balog is attuned to more than just the prime minister’s spiritual needs.

Earlier this year the state set up the Konyvtarellato Nonprofit Kft. (KELLO) to handle the manufacture and distribution of textbooks.  Evidentally the government intends to extend its particular brand of wasteful incompetence to publishing the very textbooks it proved incapable of delivering in the first place. It is not clear from the text of the bill submitted yesterday whether the government intends to take over the printing of the books as well.

According to article 6 the bill “eliminates from a legal point of view the production of textbooks according to market principles and creates state responsibility for writing and distributing textbooks”.  Hvg.hu writes that “the bill is so difficult to understand that it is not possible to precisely know what part of the market is being appropriated”, that is, whether the government plans to acquire existing companies, create new ones, or leave certain roles to existing publishers, but concludes that “it seems likely that the entire industry will disappear from the market.”

The bill justifies the nationalization of Hungary’s textbook market on the grounds that the current free market mechanism of textbook production is profit driven and therefore chaotic. The bill declares the state responsible for preparing, manufacturing, and distributing textbooks and provides for the creation of state organs responsible for writing and publishing textbooks.  The bill also defines the procedure for registering a textbook and regulates who may apply to register textbooks

The bill provides for teachers to be able to choose from a maximum of two textbooks per subject per class year.

From Remenyfy’s reading of the bill it is not clear how the government plans to tender out the preparation and manufacture of textbooks.  Nor is it clear who will publish the books or what the exact subject of the tender will be. Nor does the bill specify criteria for selecting tender winners. In the absence of such criteria “whatever the minister chooses becomes a textbook” according to Remenyfy.

Opposition leaders are outraged.  “Never has education been centralized to such an extent” says Istvan Hiller, former Minister for Education under the first Socialist government. “It flies in the face of modernity. The supply and publication of textbooks is just part of this.”

Hiller believes the nationalization of the textbook industry is an overt attempt on the part of the current conservative government to entrench its power by dictating to students what to think via a government imposed national curriculum taught using uniform, government written textbooks. “In 1978 under the Kadar system the ratio of state prescribed textbook content to free content was 70-30” Hiller points out. “Presently it is 90-10.”

Even the Fidesz chairman of the parliamentary committee on education, Zoltan Pokorni, considers the draft law “bad”.  “I believe there are many kinds of children, and many ways of teaching” Pokorni told index.hu.  “A two textbook approach is insufficient to provide children with instruction suited to their needs”.  Pokorni claims he was not consulted on the matter.

The proposed nationalization threatens the livelihoods of thousands of professionals engaged in the writing and printing of textbooks.  It also threatens scores of printing houses with bankruptcy.

According to the president of the Textbook Publishers Country Organization (TVOT), Judit Szarvas-Baller, “the nationalization of textbooks means textbook publishers will cease to exist in the classical sense.”  While some may continue to publish exercise books and workbooks, Szarvas-Baller believes most publishers will be forced to close their doors.  “It is not clear whether the state textbook publisher will be capable of serving the entire market, and what will happen if not.”

Also unclear is the fate of publishers of maps and exercise books which, according to the bill, are also to be classified as textbooks.

Katalin Peller, General Secretary of the Association of Printers, told hvg.hu it is not clear how the law affects them.  “If the HUF 4 billion textbook manufacturing industry is also to be taken over by the state then 20-25 large Hungarian printers that have existed for many decades will find themselves in an extraordinarily difficult situation.”

According to Remenyfy the bill completely eliminates the textbook publishing industry and will result in many experts winding up in the street who have worked in the industry for 10-20 years.  According to Remenyfy many hundreds of jobs will be eliminated and knock-on effects on related industries will make life difficult for many thousands of families.

Remenyfy believes it is a huge mistake for the State to try to publish all the textbooks for the 2014-2015 school year.  He warns there is a real danger of the books not being published on time, let alone delivered on time.

He also points out that the qualification of some 200-300 textbooks is already underway, each representing an investment of many millions of forints, and that the state will be called on to compensate private publishers for hundreds of millions of forints in losses.

Some of the printing houses threatened with bankruptcy have been around for hundreds of years.  One, Alföldi Printers, dates back to the 16th century.

It seems the ability to survive war, revolution, communism, and the free market is no guarantee one will survive the second Orban government whose steamroller “reorganization” of entire industries has already destroyed thousands of private sector jobs.

One suspects the real reason for the nationalization lies in the fact that textbooks are to be made available free of charge to students in grades one through eight, i.e. the government will be spending some HUF 10 billion (USD 45 million) annually on primary school textbooks rather than parents or schools. One of the central tenets of the current Fidesz-KDNP government appears to be that, when it comes to spending a lot of taxpayer money, the free market is not to be trusted.

Unable to improve the lives of Fidesz supporters by growing the economic pie due to its own misguided “unorthodox” economic policies, Fidesz has resorted to transferring jobs from the competitive private sector to the non-competitive sector in the form of local or state monopolies, all in the name of building a new society grounded in respect for hard work.

If anyone does not respect the value of hard work, it is Fidesz and its cadres of career politicians who have never held jobs outside of politics, starting with the prime minister himself.

One notable exception is Zoltan Balog who worked as a Reformed minister for many years before joining the current government, first as state secretary for the advancement of minorities and now as Minister of National Resources.  What is not clear is how Balog’s background prepared him to run so large and complex a ministry. Many would argue that he is not qualified for the job, and that he is merely there to do Orban’s bidding.