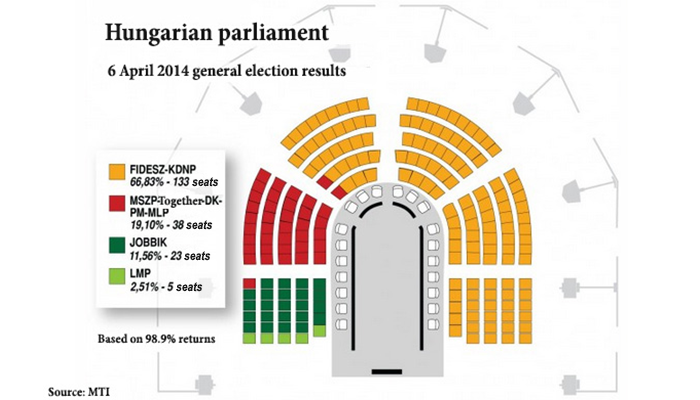 Low voter turnout and an electoral system turned on its head made it possible for Fidesz to achieve a two-thirds parliamentary majority in the general election of 6 April despite its national list receiving just 43.57 percent of the vote.   This electoral aberration can be attributed primarily to the new practice of compensating the winning party for votes cast in electoral districts beyond the minimum necessary for its candidate to get elected.

By modifying the electoral law so as to compensate the winning party for so-called “broken votes” previously allotted only to losing parties only, a system originally intended to make it possible for small parties to get into parliament, now artificially increases the size of the winning party’s mandate at the expense of the losing parties.

Seen in a different light, if the Hungarian general election of 2010 (where the Fidesz national list received 52.7 percent of the vote) had taken place under the current electoral system, it would have resulted in a Fidesz-KDNP parliamentary mandate of 75.9 percent instead of 68.1 percent.