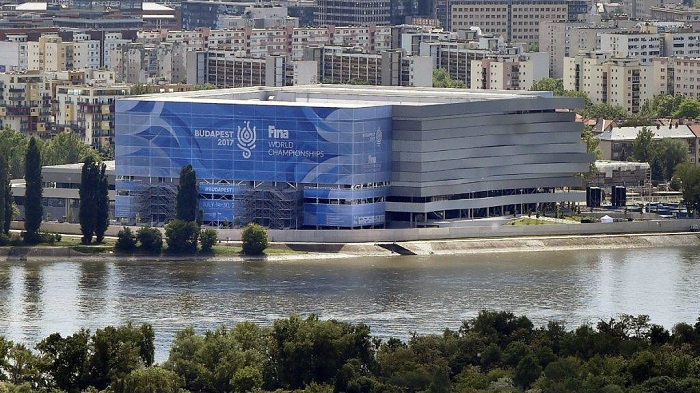 The 2017 International Swimming Federation (FINA) World Championships opens this week in Budapest. The story of the organization of the championships – considered the biggest sports event ever held in Hungary – gives an insight into the workings of state-coordinated corruption in Hungary and highlights how low chances are that Hungary could ever organize an economical Olympics.

Money is no object

Hungarian Prime Minister Viktor Orbán and FINA executive director Cornel Marculescu announced Hungary as the organizer of the 2017 FINA World Championships at a joint press conference in March 2015 after the Mexican city of Guadalajara bowed out of hosting due to economic struggles. Budapest was selected as the primary location to hold the event, and Balatonfüred – on the northern shore of Lake Balaton – was chosen to host the championships’ open water events.

At the time, Orbán underlined that Hungary’s economic development provides a strong basis for organizing the event, and that the championships promised to be profitable. However, despite his enthusiasm then, Budapest lacked much-needed water sports infrastructure imperative for a sporting event of such size.

Skeptics voiced concern about the short organization deadline, and the Hungarian government’s notorious, unappeasable hunger for public funds when it comes to gigantic investments, but Orbán and then-president of the Hungarian Swimming Association (MÚSZ) Tamás Gyárfás were not to be dissuaded.

The biggest (and most expensive) sports event in Hungary’s history

One of the biggest promises of the organizers was that the event would not cost a fortune. Indeed, the initial HUF 24.5 billion (USD 91.26 million) budget could be considered economical as it included the construction of a brand-new swimming pool complex and a host of other infrastructural investments for the city. It sounded too good to be true – and it was.

Just two months after Orbán’s announcement that Hungary would host the event, the government allocated HUF 49 billion (USD 182.5 million) for the world championships budget, just on double initial estimates. The government placed the costs of the Danube Arena at HUF 40 billion, and allocated the remaining HUF 9 billion of the budget for the renovation of numerous water sports facilities.

As of this writing, the government has spent HUF 17 billion on building new auxiliary facilities and renovating existing water sports facilities including:

New synchronized swimming facilities (including a temporary pool in the middle of the City Park) – HUF 4.9 billion

The latter was widely criticized by opponents of the championships as a meaningless waste of public funds. The Budapest diving tower cost eight times more than the same facility in Kazan, Russia (host of the 2015 FINA championships), and will be completely demolished after the events.

Organizers also spent HUF 9.3 billion on traffic investments that included the renovation and rehabilitation of the quayside in northern Budapest, and building parking lots and garages both in Budapest and Balatonfüred. 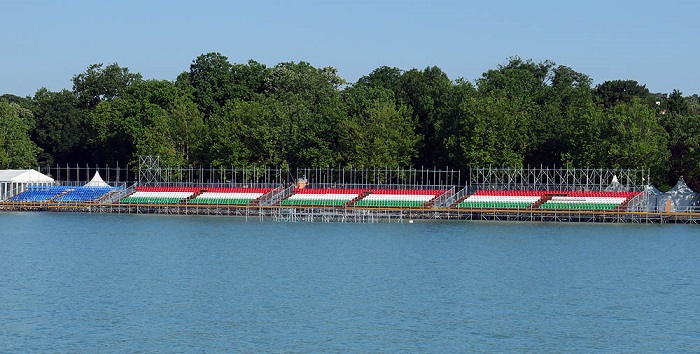 The underground garage in downtown Balatonfüred has become a particularly potent symbol of the event and the endless stream of money spent on it. The construction of the garage – originally planned to cost HUF 8-900 million – began late, and the deadline for completion was delayed several times. The garage was still half-ready one week before the first competition in Balatonfüred – well beyond the last deadline of June 30 – and its cost had climbed up to HUF 1.91 billion.

Organizers spent HUF 9 billion on the infrastructural renovation of Margit Island in Budapest, which houses the Hajós Alfréd swimming pool. Most of the budget – some HUF 5.5 billion – was spent on building a sewer system on the island.

Last but not least, organizers spent HUF 6.7 billion on accommodation for participants and spectators through five procurements. Four tenders were awarded to hotels, which is nothing out of the ordinary. However, the fifth procurement involved the complex renovation of the emblematic Bibó István College, which once gave home to Orbán and several other prominent Fidesz members during their law studies in the 1980s, to make it fit to accommodate visitors to the FINA championships. It is very likely that the renovation works that were estimated to cost HUF 405 million will not be finished by the time the championships begin on July 14.

The Danube Arena, a rather expensive bluff

Initial plans for the main venue of the 2017 championships – presented in an application submitted in 2013 to host the 2021 world championships – featured a spectacular swimming complex housing 4-5,000 spectators that could have been an immediately recognizable landmark of the northern part of Budapest. 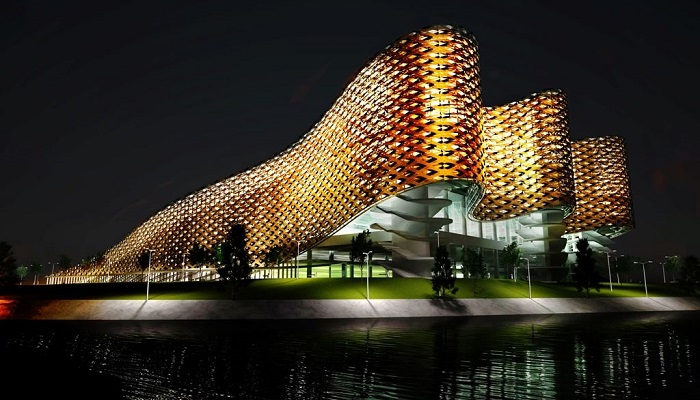 The organizing committee presented brand-new visualizations of the swimming pool after Hungary had undertaken the hosting of the 2017 championships when Guadalajara bowed out. The plans got even more grandiose, envisioning the building as “a golden wave-shaped symbol ascending towards the Danube, that will include the racing pools and a permanent grandstand which will be supplemented with a temporary grandstand during the time of the 2021 world championships.” This incarnation of the Danube Arena would have cost HUF 8 billion according to the plans, and would have been completed in the second half of 2016.

The plans were modified for the second time in 2015. The justification for the change was that Hungary was not preparing solely for the world championships anymore, but also for the potential hosting of the 2024 Olympics, which would require a much larger venue. The changes that were coordinated with FINA completely redrew the appearance of the venue, which began to resemble a huge block of concrete. Costs began to climb and new estimates put the arena at around HUF 20 billion.

When asked about the huge difference between the initial plans and the implemented structure, government commissioner for priority investments Balázs Fürjes admitted in an interview with ATV in February that “that was only a bluff. The thing is, that it was a visualization. Somebody had to conjure a visualization.” Fürjes alleged that representatives of FINA were amazed by the finished building, and that they have never seen “a swimming pool of international quality be built up this quickly.” Later in an interview with Index, Fürjes said: “What I said was not very elegant, it is true.”

Meanwhile, the latest estimated costs of building the arena are about HUF 46 billion (USD 171.35 million).

Although originally the Danube Arena was planned as a professional water sports venue and a recreational center for non-professionals, it is not yet known which parts of the facility will be open to the public after the world championships.

If anyone ever doubted the Prime Minister’s statement on the world championships being a very profitable event, they can rest assured. More than 70 percent of the procurements closed as of June 2017 – worth a total of HUF 102 billion – were awarded to the companies of eight Hungarian entrepreneurs. Coincidentally, many of them have ties to the government or directly to Orbán.

The biggest winner was Orbán’s long-time friend István Garancsi, whose construction firm Market Inc. was awarded some HUF 43.4 billion of contracts both alone and in a consortium.

Contracts worth HUF 7.6 billion were awarded to Penta General Construction Ltd. owned by Gábor Lajos Nagy. The company contracted one of Orbán’s father’s firms as a supplier.

Épkar Inc. – owned by the Szeivolt family – was awarded HUF 7 billion of procurements. The Szeivolts reportedly have ties to the Orbán family and to Felcsút mayor and oligarch Lőrinc Mészáros as well.

Young and Partners – the number one communications contractor of the government for years – was awarded a contract worth HUF 2 billion to organize events during the time of the championships, which end on July 30. Young and Partners is owned by Tibor Kuna, a close friend of propaganda minister Antal Rogán.

I can’t get no satisfaction

Perhaps the most shocking of all the wild spending of public funds is the HUF 3.4 billion that is to be spent on the two-hour opening ceremony. Organizers said they wanted to make the ceremony an Olympics-like spectacle. And they meant it. 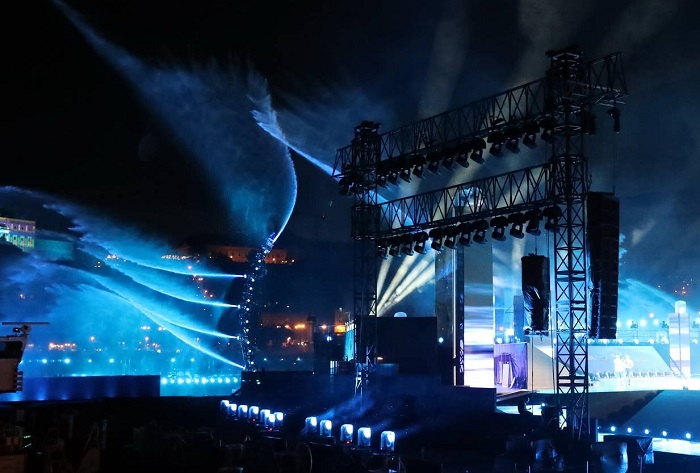 The ceremony will be held on a floating stage on the Danube with 500 Hungarian performers among water and light installations. Directing and organizing duties for the ceremony were awarded to the Palace of Arts (MÜPA), a professional concert and arts venue.

Organizers wanted to book a world-class performer as the main act, and for a while the Rolling Stones were seriously considered. Given that organizing committee chair Lajos Kósa is a huge Stones fan, it was not surprising that organizers allegedly coordinated with the management of the band. Eventually organizers could not book the Stones and contracted singer Emeli Sandé instead, who just a week before the ceremony canceled due to illness. In a last-ditch effort, American singer and rapper CeeLo Green was booked as the main act.

Organizers spent HUF 2.4 billion on stage technology alone, and the remaining billion on the performers. To put these numbers into context, the 28 performers on the main stage of Hungary’s week-long Sziget Festival cost a total of HUF 1.85 billion. Amplification and other stage technology is costing HUF 100 million for an entire week.

Just 10 days before the ceremony, director Csaba Káel contacted many prominent retired Hungarian swimmers – among them several former Olympic and world champions – to ask them to participate. The swimmers received written notes about their roles in the performance, as well as the time of the main rehearsal and other tasks, six days before the ceremony. According to one of the swimmers, the director was unable to tell the invited swimmers what to wear during the show.

The next day swimmers received another letter that read, “During the night rehearsal the director decided that there will be no need for the Olympians.” According to an anonymous source, the veteran swimmers felt humiliated, and for good reason.

“Even if they fall on their knees, we will not be there,” one swimmer said.

Less than a week before the start of the world championships, Index revealed that organizers had neglected to mention a HUF 30 billion procurement awarded for the event, despite Minister for National Development Miklós Seszták’s statement that all spending on the championships is public. The HUF 30 billion reportedly covers network infrastructure required by media broadcasters, including software and hardware elements, lighting technology and mobile devices.

According to Index, the national firm Antenna Hungária was commissioned with the tasks without a procurement. However, the real winner of the task was not the national company which undertook the work based on the cost of materials, but the sub-contractors that – according to an Index source  – were handpicked “higher up the chain.” To be able to pay the sub-contractors, Antenna Hungária was given HUF 21 billion by the state at the end of 2016 for uncategorized purposes.

The still not final bill

Sources used for this article: