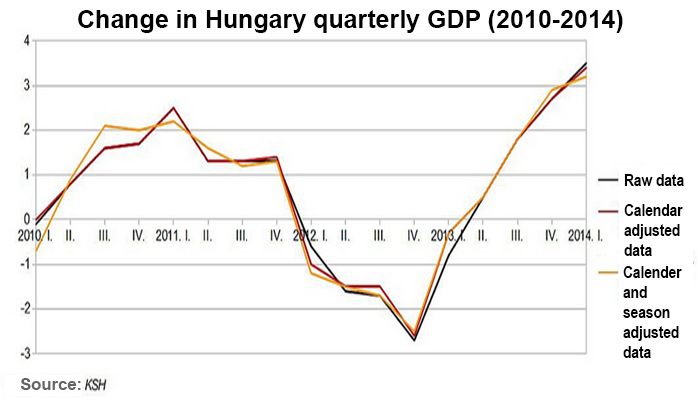 According to preliminary data released by the Central Statistical Office, Hungary’s GDP grew 3.5 percent year-on-year the first quarter of 2014.  Adjusting for calendar and season variations, the growth was 3.4 percent and 3.2 percent, respectively.  This exceeds expectations for 1st quarter GDP growth of 2.7 percent.

Behind the growth is an increase in household consumption helped by low infation, and an increase in real incomes helped by an improvement in employment figures, according to the National Economics Ministry. Accelerated use of EU grants resulted in a higher level of construction and private sector activity

According to Gergely Gabler, an analyst with the Erste Bank, GDP growth was helped by an “extraordinary increase in car manufacturing capacity and production contributed”.   Gabler said the economy was “starting to bounce back from 11-year investment and consumption lows”.  He said GDP growth for the year could reach 2.5-3.0 percent, and that household consumption would increase thanks to low inflation and its impact on real wages.