Tuesday afternoon in Budapest’s Kammermayer square a flashmob of some 50 people celebrated the victory of independent candidate Zoltán Kész in Sunday’s by-election in Veszprém.  The speakers said the election results proved that Hungarian Prime Minister Viktor Orbán can be defeated, as many people are fed up with him and his now-gone two-thirds parliamentary majority.  Kész said he will cooperate with every friend of the West in parliament to bring this about.

The event was well attended by the press. 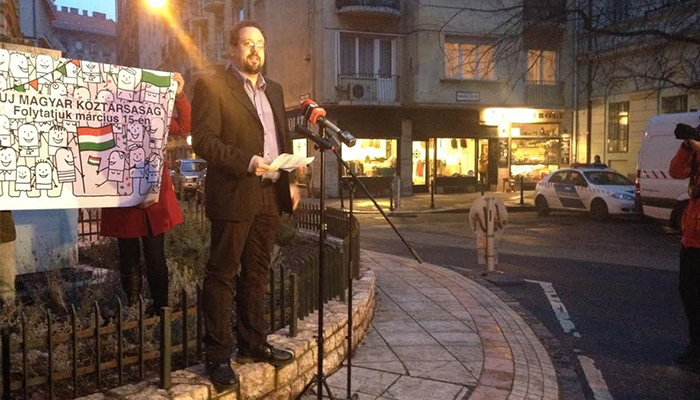 The first person to address the small crowd was flashmob organizer Zoltán Vajda, who pointed out that the fact Kész had been running against 12 other “phony” independent candidates was not enough to prevent him from winning Sunday’s election.  Vajda said the election results proved that “Orbán can be defeated” and “it was no longer necessary to fantasize about general elections being brought forward,” adding that in order to bring this about before 2018 “we must act to replace the current government.”  As for who to thank for the victory, Vajda said “Kész was the candidate of the civils and a civil candidate” and for this reason the success was entirely his, “although many try to claim it as their own” (Vajda was referring to Hungarian Socialist Party (MSZP) claims that it had played an instrumental role in depriving Fidesz of its two-thirds parliamentary majority). However, Vajda acknowledged that the autumn demonstrations “may have contributed to his success in some small measure.”

“The Orbán system will collapse, because authoritarian behavior supported by the two-thirds parliamentary majority was the basis for the exercise of power, and that has come to end,” Vajda said. “It demonstrated that we do not need foreign help or a messiah. Nor must we wait for Fidesz to destroy itself from within.”

Telling the crowd that “the key to the solution is in the hands of the citizens”, he said it was necessary to once again show how many people were fed up with the Orbán government in mass protests planned for March 15, the day Hungary commemorates the start of the revolution of 1848-9.

Vajda was followed by the organizer of last year’s anti-internet tax demonstration, Balázs Gulyás,  He congratulated Kész and said this was also a victory for “protestors opposed to the Orbán government” as well as “civils wishing to do something.”  He said Kész had won with a program that treats everybody as being equally important, “and not only entitles those close to the ‘Felcsut mafia’ (referring to the Prime Minister’s home town) with the right to a happy life.” 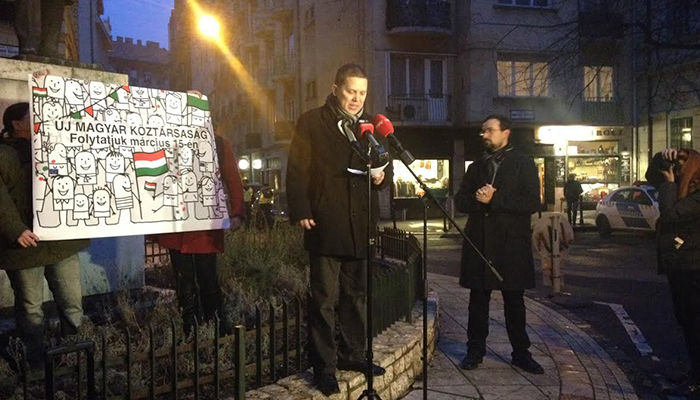 Finally, Zoltán Kész himself had the opportunity to address the crowd. He thanked his supporters and said the people of Veszprém had had enough of the two-thirds parliamentary majority, “so much so that they did away with it.”  The future member of parliament said that at present there are 4 million impoverished people in Hungary, but tax revenue was not going to the poorest but to the government’s oligarchs.  He said his program was based on three things: the West, freedom and prosperity, and as an MP he would cooperate with every politician who was a friend of the West towards achieving these objectives.  Rather than look at who represented which party, it was necessary to see who supported a Western, European type of development.

The event concluded as it began with the singing of the Hungarian national anthem.