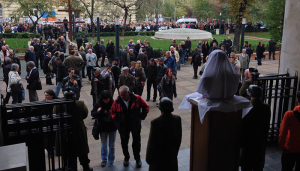 On Saturday a flashmob protested the unveiling of a bronze bust of Admiral Miklos Horthy at the entrance to the Hazatérés Templom (Homecoming Church) in the heart of Budapest.   The reformed church is led by stridently anti-Jewish minister Lorant Hegedus, Jr. whose wife is a member of the radical right wing Jobbik parliamentary faction.  Among the protesters were people of all ages and faiths including Christians, Jews, Buddhists, and atheists. Many, including a woman holding a baby, wore the Star of David in reference to anti-Jewish laws passed under Horthy and the subsequent deportation and murder of two-thirds of Hungary’s pre-war Jewish population.

Around 1000 demonstrators representing a broad spectrum of Hungarian society held placards and banners denouncing Horthy and Nazism, blew whistles, and chanted “Nazis go home”, “Traitors” and “We won’t allow it!”  While all expressed disgust with the man responsible for the death of over 800,000 Hungarians and those who would honor him with a statue, many also voiced disapproval with the rehabilitation of several other Second World War criminals under the current Fidesz-KDNP government.

By 9:30 am the street in front of the Hungarian Reformed Church was packed with demonstrators.

At 10 am Church bells rang and continued ringing for the next hour and a half, possibly in an attempt to drown out the sound of demonstrators chanting in unison.

Over the course of his sermon Hegedus reportedly told the 300 or so in attendance that the day’s event was a test to see if a statue of Horthy could be erected in the heart of Budapest and that the protesters’ “hatred” was not directed at him personally but rather at “the will of the people. ”  He was followed by radical right wing member of parliament Marton Gyongyosi who gave a speech in which he reportedly called Horthy “the greatest Hungarian statesman of the 20th century.”

During the service unarmed soldiers dressed in Horthy period costume stood guard outside the entrance to the church on either side of the veiled statue.   Shortly after 11:30 am  Hegedus and Gyongyosi led a procession outside the church where they unveiled the bust of Horthy. They were separated from nearby demonstrators by a cordon of police and event security.  Concerned primarily with preventing protesters from obstructing the outside part of the event, police took no notice of a group of men waving the striped flag of the House of Arpad and wearing the uniform of the banned right-wing militant group Magyar Gárda (Hungarian Guard).  At no point did police attempt to disperse the demonstrators.

This is the second time in as many years the dedication of a Horthy statue has met with public protests.  In June 2012 Hungarian lawyer and liberal activist Peter Daniel doused a wooden statue of Horthy with red paint and hung a sign around its neck proclaiming him a “mass murderer war criminal.”