The demonstration was organized by the Civilizáció (Civilization) Facebook group, and speakers addressed what they consider the aims of their work and the way such work is treated by the Fidesz government: civil organizations perform functions which the government either cannot do or chooses not to. It is not enough that the government ignores problems such as health-care and education, it wants to make it impossible for others to perform this work in its place.

Upon the conclusion of the expressly peaceful demonstration, there was a scuffle by the nearby Fidesz headquarters, and then part of the crowd headed downtown in the direction of Parliament.

One of the affected organizations, the Hungarian Civil Liberties Union (TASZ), issued a lengthy analysis, which concludes that, even though the government’s bill purports to provide for greater transparency, it places an administrative burden on the affected organizations without furnishing additional information to authorities of any use. Meanwhile it makes it more difficult for civil organizations to raise money by stigmatizing them and instilling uncertainty in citizens, and is generally damaging to civil society. According to Amnesty International, the new regulations will have a similar destructive effect on NGOs as when similar measures were implemented in Russia.

The crowd demonstrated not only on behalf of civil organizations but also Central European University (CEU), whose ability to continue operating in Hungary is threatened by the modified law on higher education adopted by Parliament last Tuesday and signed into law earlier this week by President János Áder.

Apart from the music and festival-like atmosphere, the main feature of the demonstration was a living picture: the crowd formed a heart in the center of Heroes’ Square in which the word “civil” was formed in block letters on the ground just adjacent to the “Budapest” sculpture, whose letters had been covered in black. This was captured by photographers who took turns ascending in the basket of a cherry-picker brought in for the event.

Scheduled to begin at 6 pm, the square began filling with people shortly after 5 pm, with a large crowd arriving on foot via Andrássy avenue. By 6 pm, the square was packed with the crowd extending several hundred meters down Andrássy as far as the Kodály circus.

The nearby presence of several hundred riot police may have prompted master of ceremonies Veronika Móra to remind the crowd at the start of the event that they were attending a peaceful demonstration.

“Without freedom one cannot live”

First to address the crowd was CEU student and civil activist Luca László, who explained that civil organizations are for the environment, education, rule of law, or to help those “the government allows to freeze.” She said that being a member of civil society was a great responsibility, emphasizing that they are not afraid and will struggle on until Hungary is “free of corruption and constitutional democracy exists.”

The crowd responded by chanting “we won’t allow this!”

She was followed by Hungarian Civil Liberties Union (TASZ) managing director Stefánia Kapronczay, who spoke about how, at the time of Hungary’s transition from communism, people had believed in a free press, the free expression of opinion without fear, and that power should not be concentrated in the hands of an exceptional, narrow group. She said this dream has faded, and the Hungarian government was unscrupulous in imposing any manner of repressive policies, and that they will always sign something which they are required to sign, referring to President Áder’s decision to sign the modified law on higher education on Monday.

“Without freedom one cannot live,” said Kapronczay, who added that we are living today in a country where even to raise questions is suspect, or where The Bards of Wales (a poem by Hungarian poet János Arany) is political criticism. Today a culture of fear pervades, she said, but the more of those who stand up for themselves and others, the smaller the pressure.

“Let’s show that there exists another Hungary,” she exclaimed, adding that it is necessary to protest and to teach critical thinking to the next generation so that they do not become submissive subjects, but active citizens,

“The fetters of existential dependence is strangling people”

To loud applause, Hungarian civil activist, educator, and blogger Nóra L. Ritók was the next to take the stage.  Speaking about her own activities, the director of the Igazgyöngy Alapítvány (True Pearl Foundation), which operates an arts school in the town of Berettyóújfalu in one of Hungary’s most disadvantaged regions, said that it seems poverty, child hunger and school segregation problems are made up in Brussels, if you ask the Hungarian government. The sad truth, however, is that those living in the neglected regions do not believe that Hungary is strengthening, although they were told by the authorities that this was the case, Ritók said. They were labeled troublemakers, and then Soros’s minions. Then came the threats and the inspections. Finally, they reached the point of rejecting applications, so that today those issuing tenders won’t even talk to members of her organization, because they have no chance of winning. She speculates that the reason the government came to regard them as opponents was because they refused to lie and say that everything was fine, and because they stood up for the disadvantaged. Meanwhile, people look away because today it is better to be loyal: “existential dependence fetters and strangles people,” said the educator.

Ökotárs Foundation director Veronika Móra was the last to take the stage, telling the crowd that without civil organizations Hungary would be a much darker place, because civil groups address matters which the government either cannot or does not want to address. She said the Norway Civil Fund her organization helps administer in Hungary had helped many hundreds of thousands of people in the country. She said they would be the happiest not to depend on foreign support, but that civil organizations have no choice if they want to survive.

“We were here before the current government and we will remain so as long as there is need for us,” she announced to cheers from the crowd.

The Ökotárs director said the draft law on civil organizations was “deceitful, false, and fake,” asking whether it was “okay for the government to squander the billions it gets from Brussels.” Speaking from personal experience, she said that things could get even worse, and it was important that as many people as possible support civil organizations or undertake such work themselves. Móra said they wanted to belong to a Europe in which a “flourishing, diverse civil society was an indivisible part.”

After the Hungarian national anthem and the official anthem of the EU, Beethoven’s “Ode to Joy” signified the official end of the demonstration. Part of the crowd then moved to the Fidesz headquarters on nearby Lendvay street, chanting “Orbán scram!” and “Dictator!” A small scuffle ensued, prompting police to announce by megaphone that the demonstrators were violating the law. 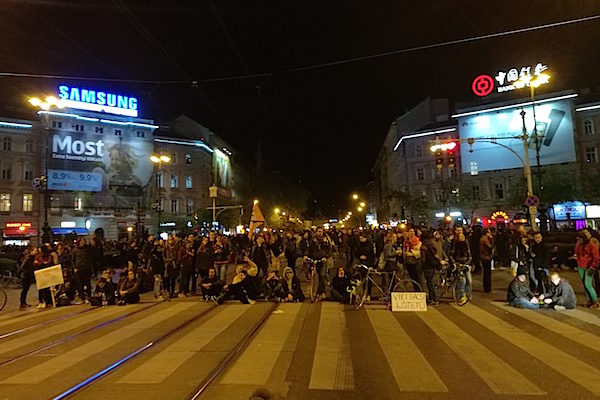 A large part of the crowd marched on Parliament from various directions chanting “Europe!”, “You will also do time!”, “Where’s the public money?”, “You protect criminals!”, and “We’re not afraid!”

At around 11 pm the crowd headed for Oktogon where it blocked traffic for several hours.