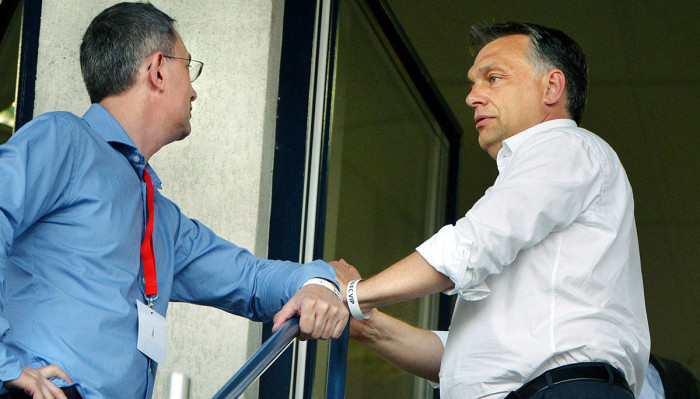 This information was discovered in a proposition presented to Budapest City Council by deputy mayors Gábor Bagdy and Balázs Szeneczey on August 21. The proposition would allow commercial advertising on council-owned lighting poles operated by the Budapest Decorative and Public Lighting Company (BDK).

Such lighting pole advertisements were banned in 2012 by the city council in order to liquidate the Spanish-Hungarian advertising company ESMA, which posed unwanted competition to Mahir, the advertising company of oligarch Lajos Simicska who was then still a close friend of Orbán. The city council abruptly declared that the lighting pole advertisements were unsafe.

ESMA was on the edge of bankruptcy when in 2015, just two months after Simicska publicly severed ties with Orbán, Garancsi bought the Spanish owners’ stake in the company. Not long after, Minister Overseeing the Prime Minister’s Office János Lázár announced that lighting pole advertisements were not as dangerous as previously thought, and the ban on the advertisements was lifted.

The council adopted a modification to the law in December the same year, introducing a category of “advertising tools that help orientation”. The only difference between the new category and traditional advertisements is that the former must feature an arrow pointing in the direction of the advertised service.

The new proposition by the deputy mayors would only allow the installation of those “orientation” advertisements. The deputy mayors argue that in contrast to traditional advertisements, the orientation ads do not ruin the cityscape, and that by re-legalizing the lighting pole ads, the council could “satisfy the market demand of advertisers”.

The proposition contains a chapter titled Settlement of the current state of public lighting. This reveals that after the life of the ban in 2015, ESMA – already partially owned by Garancsi – set up traditional and orientation-helping advertisements throughout Budapest without consulting with either the operator, BDK or Budapest City Council. Moreover, according to the proposition, ESMA had not paid a single cent for use of the lighting poles. Despite these facts, the proposition only recommends that the council make a settlement agreement with the company until new tenders are launched.

Hvg.hu contacted the council to learn why ESMA paid no fees for two years and was not fined, but the council’s press office did not provide answers, instead inviting hvg.hu to join Wednesday’s session of the General Assembly where these topics would surely arise.