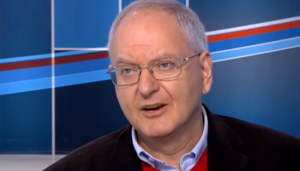 According to Karsai Hungary’s GDP contracted 1.7 per cent last year.  GKI is projecting total GDP growth of 0.3 per cent for this year thanks to a 25 per cent increase in grain production, and 1.3 per cent in 2014 thanks to growing consumer and business confidence.  By comparison the economies of Slovakia, Poland, and Romania are projected to grow 2% next year and those of the Baltic states 4 per cent.

European Union figures released this morning project GDP growth of 0.7 per cent for this year and 1.8 per cent for 2014.

“Looking at the results for the first eight months of this year we see where nearly every sector underwent contraction–industry, transportation, retailing” Karsai told Ronai.  Although “exports increased minimally” and the construction industry grew “after seven years of serious decline” the ability of the Hungarian economy to grow is constrained by “low willingness to invest, lack of a stable legal environment, and continuous intervention in the crisis taxes” i.e. continuous changes to the tax code as it pertains to specific industries like banking.

According to Karsai popular government programs like the parliament mandated 20 per cent decrease in household utility costs have the effect of increasing real wages in the short term but in the long term undermine investment and force companies to decrease the number of employees and suppliers in the interest of saving money. “The entire Hungarian economy is undergoing continuous downsizing.”

Karsai points out capital is leaving the country as Hungarian companies choose to invest profits abroad rather than at home.  Furthermore, record numbers of skilled laborers are going abroad in search of work.  Karsai calls these things “normal” but for the fact that they are happening quickly and at the same time which, in his opinion, in indicative of bad economic policies.

“The government won the ’freedom fight’. The country didn’t have to sign contract with IMF, companies close to government have plenty of work, and many markets have undergone transformations benefiting those loyal to the government.  The problem is that the whole country paid a high price for this,” remarked Karsai, who believes that whoever wins next year’s election will need to “restore the actual independence of independent institutions and return to free market principles.”