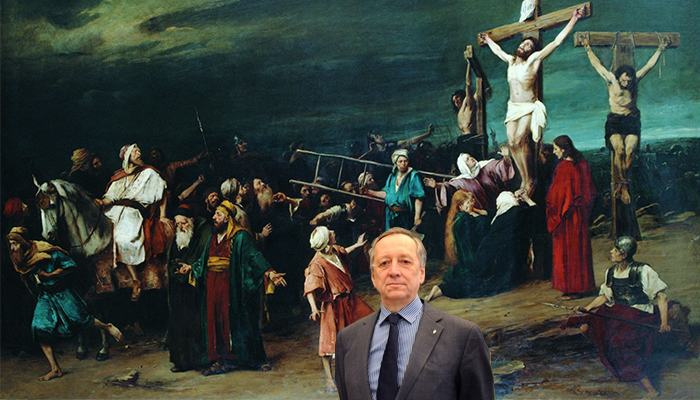 US art collector Imre Pákh with his property, Munkácsy’s Golgota

Hungary’s artwork regulatory agency has declared that Golgota, one of three large paintings depicting the trial and death of Christ by the famous Hungarian painter Mihály Munkácsy on loan to Hungary, may not leave the country.  The problem is that the painting is privately owned by a US citizen who agreed to lend it to Hungary on the condition that, should the government wish to purchase it, the price would be USD 9 million. 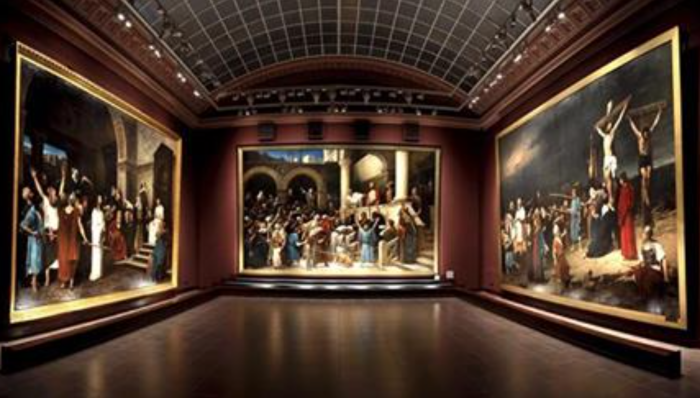 Imre Pákh, a US art collector who emigrated from Hungary in 1974, agreed to lend the painting to Debrecen’s Déri Museum so that it could be displayed with Munkácsy’s two other canvases depicting the trial and death of Christ.  Golgota is the Hebrew name for the hill where Christ was crucified, more commonly known by its Latin name, Calvary.

According to the owner the painting was recently appraised for between USD 10 and 11 million.

In what the head of the Prime Minister’s Office acknowledged at a recent press conference was “not very sportsmanlike behavior”, the government’s artwork regulatory agency declared the painting a “protected” piece of artwork after Pákh turned down the Hungarian National Bank’s offer of USD 6 million.

The 62-year-old art collector recently told hvg.hu that he had an agreement with the Prime Minister’s Office to sell the painting to the Hungarian state for USD 9 million.  “If the Prime Minister’s Office would’ve kept their end of the deal we wouldn’t have this problem right now,” says the owner, who is of the opinion that “the market should determine the value of the painting, not the state.”

Unfortunately for Pákh, if there is one thing the current Hungarian government does not believe in, it is free markets.  Nor does it appear to honor agreements, verbal or otherwise.

“When I told [the Hungarian National Bank] of the agreement [with the Prime Minister’s Office], they told me to forget it because I’m no longer negotiating with the government, I’m now negotiating with the national bank and the negotiations are starting over. They told me that a government decree would decide how much the state would be willing to pay for the painting and that price is USD 6 million,” said Pákh, understandably upset that the government would resort to such strong-arm tactics to acquire a famous painting for 60 percent of its appraised value.

The “provisional protection” accorded the painting gives the government a pre-emptive right to purchase the painting and forbids the painting from being moved out of the country, effectively stripping Pákh of his ownership rights.

Last week state secretary of the Prime Minister’s Office László L. Simon told Hungary’s state media that the government is fully committed to purchase the painting should the government and Pákh agree on a realistic price because the government’s goal is to see Golgota remain in Hungary.

“I am prepared to honor the pre-emptive right to purchase the painting,” says Pákh, “but I won’t allow them to rob me of the painting.”  He says the government’s “bludgeon policy” reminds him of the time when the Russians came and took everything. “My father was allowed just enough to work at his own company when he returned from the gulags,” says the owner, who left Hungary as a child.

“I’ll survive this. I hope that commonsense will return to the discussion sooner or later so that we can put a period at the end of this. But I have a plan B as well,” says Pákh, who plans to turn to the courts.

According to Pákh, his lawyers in the United States say he is going to win in court if he decides to file a lawsuit.

Pákh is not rushing the matter. He says he has yet to be officially notified of the government’s decision and therefore cannot initiate his “plan B” because he wouldn’t know who to sue, the government or the national bank.