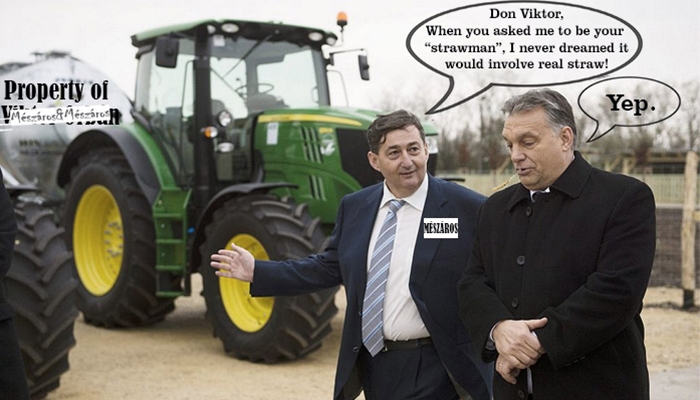 In light of the prime-time tongue-lashing state news presenter Balázs Németh gave “critical news portals” last week, we at the Budapest Beacon are pleased to report some truly good news about Hungary.

In Orbán’s home town of Felcsút, the prime minister took delivery of a brand-spanking-new cattle ranch owned by local businessman János Flier.  You know, the close friend of Viktor Orbán whose company and family members won the right to cultivate 377 acres of state-owned land adjacent to lands owned by Orbán’s father.  (What are the odds of that happening!?). And to think Flier’s company only needed HUF 430 million (USD 1.7 million) worth of EU grants to erect such an impressive-looking barn!

The second ribbon ceremony took place in Orbán’s birthplace of Alcsútdoboz where the PM took delivery of a brand-spanking-new mangalica pig farm owned by Lörinc Mészáros.  You know, the prime minister’s childhood friend who went from rags to riches in under seven years thanks to a string of lucrative government contracts.  Ring a bell?  The guy whose companies and family members won the right to cultivate over 1000 hectares of state-owned land in Felcsút.  You know, the humble gas-pipe fitter who was installed as mayor of Felcsút after parliament passed a law disqualifying his predecessor from holding that position.  The mayor of that town where they built a fantastically expensive football stadium next to Viktor Orban’s country home.  Not with Hungarian taxpayer money, mind you, but from 100 percent tax-deductible corporate donations.  Yes, that guy!

Reportedly the “feel-good” events were attended by a number of governing Fidesz-KDNP party officials. Unfortunately the Beacon couldn’t cover the ribbon-cutting ceremonies because the Hungarian News Service (MTI) was the only press invited, supposedly for reasons of animal and food safety.  (Evidently, “critical news portals” are particularly prone to foot and mouth disease).

MTI reports that Orbán gave inspiring speeches about how Hungary is an agricultural country, how agriculture has a future and will play an important role in the country’s future economic development, and that for this reason Hungarians should respect agricultural workers.

What a shame the soon-to-be-unemployed agricultural workers of Kishantos couldn’t be there.  You know, the internationally famous organic farm that was stripped of its state lands and ploughed under in a ruthless act of political vengeance after its co-founder, József Angyán, a leading authority on sustainable agriculture, had the temerity to criticize the government’s agro-business-friendly policies.

The late András Váradi certainly wouldn’t have missed the ribbon-cutting ceremonies for all the pasture in Hungary!  You know, the humble shepherd who was stripped of state lands on which he and his family had grazed sheep for decades so that Mészáros could go into the mangalica pig-raising business.  Too bad he was run over by a car and killed on the eve of local elections.  Did you know Váradi was running against Mészáros for mayor of Felcsút?  Well, now you do.

Orbán reportedly also said that over the past few years the Hungarian state had invested an “enormous amount” (HUF 350 billion (USD 1.4 billion)) in the creation of livestock facilities.  He mentioned that in the coming years Hungarian agriculture would benefit from some HUF 1.2 trillion (USD 4.7 billion) of agricultural subsidies (although he evidently neglected to mention that the bulk of this money would come from German, Dutch and Scandinavian taxpayers in the form of EU agricultural subsidies and countryside development grants).

Given the “enormous amount” involved it is reassuring to see the prime minister doing everything in his power to ensure that state lands and agricultural subsidies are distributed in a fair and equitable manner to small and medium farms, and not merely doled out to the friends and family members of prominent Fidesz officials.

Orbán also reportedly said something to the effect that, while “foreign investments are also important”, it is “celebrating the successes of small- and medium-sized companies, especially Hungarian family businesses”, that makes him all warm and fuzzy inside.

Three cheers for Lörinc Mészáros and János Flier for proving that high-level political contacts and copious government subsidies are not necessary to launch successful agricultural ventures in Hungary!  Just a lot of hard work and a little luck.