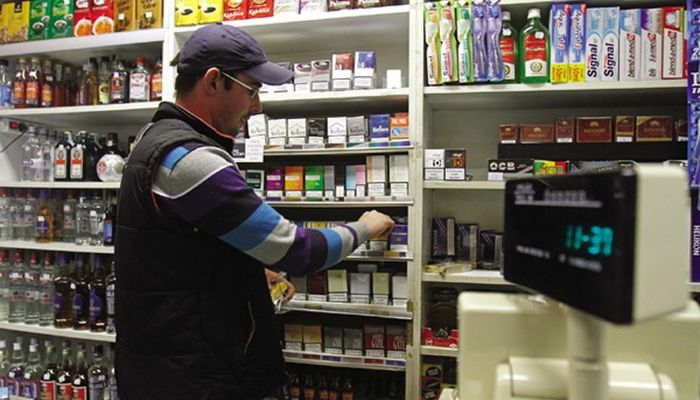 The government may have to pay several billion forints in liquidated damages to some 600 national tobacco retailers as a result of its recent decision to ban the sale of tobacco products in supermarkets and petrol stations from 1 June 2014 in order to prevent some 2500 National Tobacco Shops from going out of business.

In 2012 the government announced that it was taking the right to sell tobacco products away from some 40,000 retailers and awarding it to privately owned and operated “National Tobacco Shops”–one for every 2000 inhabitants–in the form of 20 year concessions.

The reason offered for this decision was to make it even more difficult for people under the age of 18 to purchase tobacco products.

Operators are required to pay an annual concession fee of between HUF 100,000 (USD 450) and HUF 240,000 (USD 1,000) depending on location.  In the event the contract is terminated or the operator loses their exclusive right to sell tobacco products, they are entitled to a liquidated damage equal to the total amount of annual concession fees payable for the balance of the 20 year concession.

Concession winners were required to open premises by 1 July 2013 meeting certain criteria:  Shop’s windows and doors were to be screened so that the store’s products were not visible from the outside . Uniform signage identifying it as a “National Tabacco Shop” were to be installed on the building’s exterior.

The results of the first round of tenders were announced in April 2013.  With few exceptions some 5400 concessions were awarded to friends and relatives of Fidesz politicians and prominent Fidesz supporters.  Over the course of the year the range of products they were authorized to sell expanded to include newspapers, ice-creams, soft drinks, and alcoholic beverages (presumably also in the interest of preventing children from purchasing tobacco products).  In the near future they may be permitted to sell lottery tickets as well.

According to the law those individuals or companies which operated privately owned tobacco shops for before 1 January 1993 were to be grandfathered. In practice, few existing tobacconists were allowed to continue selling tobacco products, forcing many to either close their doors to to contract with one of the 6,300 concession winners.

Some 1400 towns and villages were left without a single retailer of tobacco products after the first round. Since then an additional 900 concessions have been awarded.

Not surprisingly, a large number of corner grocery stores and supermarkets that relied upon the sale of cigarettes and other tobacco products for much of their revenue have gone out of business.

Among the winners were hundreds of applicants who had no previous retailing experience, including Felcsut mayor, Lorinc Meszaros, whose various family members won the right to operate national tobacco shops in all 19 Auchan hypermarkets operating in Hungary. Industry insiders estimated at the time that a typical Auchan sold HUF 20-30 million (USD 90,000-135,000) worth of tobacco products every month and expected this number to grow significantly.  The concession agreement ensures operators a 10 per cent margin on the sale of tobacco products.

Since July the sale of tobacco products has plummeted.  This is partly due to higher prices.  Not surprisingly, there been a major increase in the number of cigarettes sold on the black market–7.7 per cent verses 5.8 per cent a year ago–as a result of which a number of national tobacco shops have already gone out of business.

According to the Government Information Center, the government decided to close down national traffic shops operating in supermarkets and filling stations because 200 shops were responsible for 17 per cent of all tobacco sales, threatening 2500 shops with bankruptcy.  According to Petra Legradi, spokesperson for the government-owned National Tobacco Trade Zrt., the law affects 9 or 10 per cent of the concessions, which is to say that between 600 and 630 National Tobacco Stores presently operating in supermarkets or petrol stations must relocate their businesses elsewhere.

Origo reports that each of the affected concessions in Budapest presently sell between HUF 30 million (USD 136,000) and HUF 70 million (USD 320,000) worth of tobacco products monthly.

Legradi did not believe the affected individuals and companies were legally entitled to compensation for being forced to relocate their businesses, telling Index “whether or not compensation is to be paid depends on the legislators”.

Needless to say, in a normal country it would be up to the courts to decide this.

If the government is required to pay liquidated damages then this could easily exceed HUF 2 billion (USD 8.5 million) given the number of concessions involved.