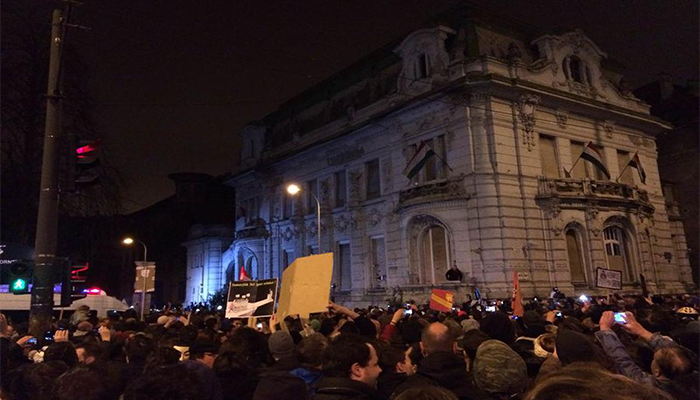 Fidesz has announced plans to amend the internet-tax bill so that it caps the monthly charge at HUF 700 (USD 3) per person per gigabyte and HUF 5000 (USD 20) per company per gigabyte of data transfer. Antal Rogán, Fidesz caucus leader, emphasized that their goal is to oblige telecommunications firms to pay the new tax “without passing the burden to consumers”. Dissatisfied with the reaction, protesters still demand that the bill be withdrawn. On Sunday night protest organizer Balázs Gulyás gave the government a 48-hour ultimatum to withdraw the bill, saying protesters will return to the streets Tuesday evening should the government not meet this deadline.

Leading Fidesz officials and government media accused the organizers of the Sunday protest with incitement against the democratically elected Orbán government. Public television showed footage implying that the vandalism at Fidesz’s Lendvay utca headquarters following the protest march was pre-planned by the organizers, who are all linked to opposition parties. They also used the fact that the US Chargé d’Affaires was present in the march to suggest he interfered with domestic dissent against the government.

Professionals commented to the Hungarian press that the provisions of the amended bill would constitute an impossible burden on telecommunications companies.

Independent Hungarian news sources and columnists agree Sunday’s demonstration was a “game-changer” for Fidesz and Prime Minister Viktor Orbán, as here they face no opposition or foreign pressure, but a rag-tag crowd of people supporting diverse political parties as well as a number of young non-partisans or even non-voters.