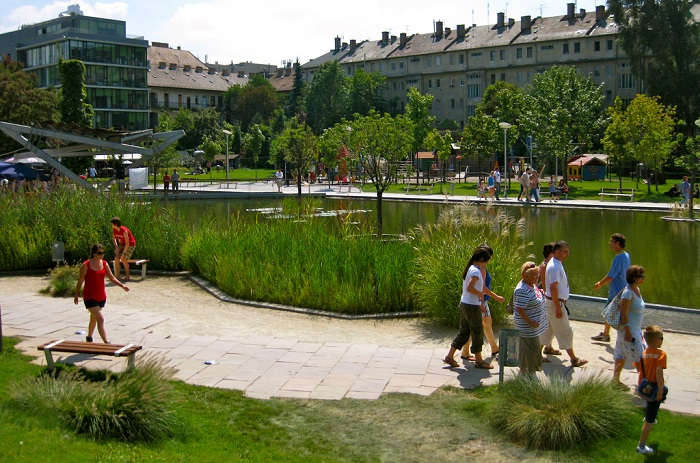 Minister for National Development Miklós Seszták has announced that the government will expand the Millenáris Park in Budapest’s 2nd district by 2.5 acres, a project worth HUF 17 billion (USD 65 million), reports Index.hu.

The investment is welcomed as the park is situated in one of the most traffic-heavy – and thus most polluted – areas of Budapest. However, costs of the investment might seem a bit high for an area of this size. As a comparison, the reconstruction of Széll Kálmán (Moszkva) square just a few corners away, which is roughly the same size as the affected area at Millenáris, cost HUF 5.3 billion (USD 20.27 million) including tram track reconstruction, road renovation and paving. That’s more than three times cheaper.

According to Zoltán Halmai, the executive director of Millenáris Széllkapu Nonprofit overseeing the project, a quarter of the total budget was spent on preparatory works including the demolition of the old Socialist-era ministry buildings originally standing on the site of the future green area, and clearing the area of waste and rubble. The remaining sum of a little over HUF 13 billion (USD 49.7 million) will be distributed as follows:

According to the cost benefit analysis prepared by Hétfa Research Center, from the point of view of national wealth, the project will show a return as early as 2024 and provide an immediate profit for nearby property owners worth an estimated total of HUF 16.5 billion (USD 62.94 million) in real estate appreciation.

The aforementioned costs cannot be considered final, and the closed procurements with exact costs will be published next week.