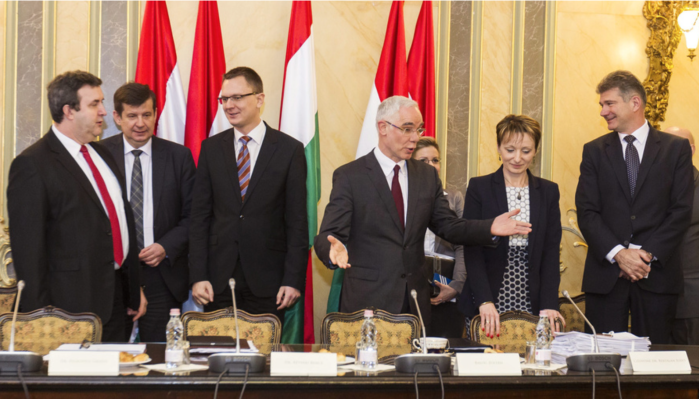 The first of what the Ministry of Human Resources hopes will be a series of biweekly roundtable discussions on education took place yesterday. The discussions follow wide-scale disaffection on the part of school administrators, teachers, students and parents alike.

Following the meeting, the government announced that it had already decided on serious changes to public education.  Among other things, the budget of the Klebelsberg Institution Maintenance Center (KLIK) tasked with maintaining public schools following their nationalization in 2012 is to be modified, as well as the cumbersome system of teacher self-evaluation.

The roundtable discussion was organized in the wake of protests following an open letter written by the teachers of Miskolc’s Herman Ottó Academic High School in November 2015 addressed to Prime Minister Viktor Orbán.  The letter details the problems with public education following wide-scale reforms adopted under the second and third Orbán governments, largely without consulting teachers, trade union leaders or professional organizations.

Part of the “reforms” included the elimination of the Public Education Policy Council previously tasked with providing expert advice to the Prime Minister.  Teachers’ Union President Mrs. István Galló told ATV that a restoration of the council was one of her organization’s demands.

Daily index.hu reported that the discussions were productive “despite the government inviting a few surprise guests,” including representatives from the Hungarian Cultural Academy and the Ministry of Defense.

Among the reforms announced by the government after the first roundtable were:

Teachers Democratic Trade Union president László Mendrey said the largest result was that the government did not rule out anything:  “Not once did they say ‘no’, even when it came to the most sensitive issues.”

At the next roundtable discussion participants will discuss the role of the state in education, and institutional autonomy and economic independence.  Mendrey said the government was also open to involving civil organizations in the work of the roundtable.

National Teachers Faculty president Péter Horváth told MTI he left the negotiation table satisfied.  “Every subject one can hear or read about came up over the course of the meeting,” he said.

Hungarian Trade and Industry Camera (MKIK) president László Parragh told MTI the country’s badly performing educational system has done visible damage to the economy.  He said the biggest problem was that a number of children leave primary school without having mastered the basic competencies, and many of them cannot write, read or do math adequately.

Before the roundtable discussion, various government officials, including Minister Overseeing the Office of the Prime Minister János Lázár, said the government would continue to insist on a centralized educational system.

László Palkovics, who was appointed educational undersecretary over the weekend, said solving the problems related to the reform of the educational system would take time.  He said there are a number of problems that are not systematic in nature but which are difficult for KLIK to manage on a centralized basis.  In an interview given to MTI on Monday, Palkovics said there was a need for urgent and immediate changes. Among them is the need to modify the compulsory national curriculum introduced by the second Orbán government, both in terms of subjects taught and the number of lessons.

However, numerous experts believe that the largest problems originate from the fact that Hungary’s educational system is so heavily centralized.  Education researcher István Nahalka told online daily hvg.hu that the problems go far deeper than the subject of teachers’ demands.  For example, schools separated children from different social backgrounds at too early an age, and did not compensate for disadvantages.

The roundtable was convoked by Minister of Human Resources Zoltán Balog on January 23 after the open letter written by the teachers of Herman Ottó Academic High School escalated into national protests.

Many of the organizations represented at the roundtable are closely tied to the government.  A number of them, including the Hungarian Cultural Academy (MMA), the Association of Big Families, the Alliance of Family Organizations in the Carpathian Basin and the Ministry of Defense, have little, if anything, to do with public education.

The Teachers’ Trade Union boycotted the meeting because it previously formed a strike committee which is scheduled to meet government officials on Friday.