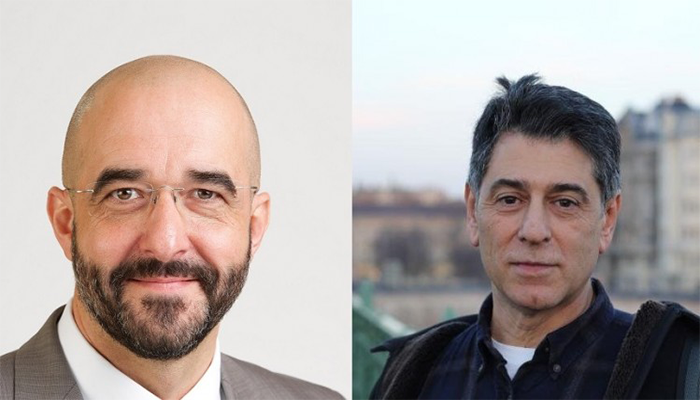 The Chargé d’Affaires at the US embassy in Budapest, André Goodfriend (pictured right), was photographed by Népszabadság calmly marching with internet tax protesters along Andrássy út and taking photos.

Orbán government spokesman Zoltán Kovács (pictured left) reacted angrily on Twitter to Goodfriend’s presence, accusing him of escalating a heated situation. Kovács referred to the fact that after the official protest ended on Hősök tere (Heroes’ Square), over a thousand protesters laid seige to the Fidesz party headquarters, hurling monitors, keyboards and other computer components.

Goodfriend reacted by saying that the crowd was, for the most part, peaceful, although he condemns vandalism.  He asked Kovács what was the government’s “constructive” reaction to the demands made there.

We republish the extraordinary diplomatic Twitter-discussion in its entirety here for our readers’ benefit.

Z.K.: you really sure that’s the wisest thing in this histerically stirred-up atmosphere while you vindicate to be a key actor? Eh?!

A. G.: there’s always a choice between hiding away, & getting out to see what’s happening. I try to hear the full range of perspectives

Z.K.: Sure “hearing” and influencing does make a large difference.

A. G.: When I want to influence, I speak. Otherwise, I’m listening. Sometimes there’s not enough listening.

Z.K.: That we’ve learned through the past couple of days. Sometimes there’s too much “demonstration”.

A.G.: So, now is the time to draw lessons from the discussion, and follow words with constructive, meaningful deeds

Z.K.: Surely, giving an ultimatum by demonstrators to a govt is no ground for constructivity. Good luck with friends like that…

A.G.: some people see ‘ultimatum’ others see a proposition awaiting response as part of dialog.  Constructive part may be the response

Z.K.: Have seen and heard what happened. Pretty much annoyed and concerned.

A.G.: re the reported vandalism? Yes, that is concerning.  But what was gov perspective re the objective of bulk of peaceful marchers? constructive part may be the response. A strong government can afford to be inclusive, not worry about seeming weak.