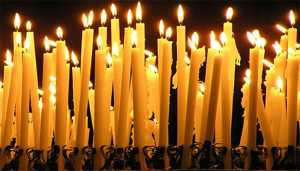 According to folklore the dead return to Earth and hold mass on the eve of November 2nd. It was customary to feed local poor and beggars. In the Gyimes Valley the saying was Halottak napjára főzünk, sütünk ciókat odaadjuk avval, hogy hóttaké–“On the Day of the Dead, we cook and bake bread for the dead.” In some areas villagers would put food on the tombstones or around graves but they would also give food to the poor.

In Ipolyhídvég local members of the extended family would have lunch together. After lunch they would all go to the cemetery and light a candle for the dearly departed.

It was forbidden to wash clothes on this day (and in some places for the entire week) because the returning dead would be standing in water according to local myth. In Csallóköz anything washed on this day would turn yellow and anything painted become infested with worms.

In Slavonia any gardening or fieldwork on this day resulted in botched work.

In Csantavér people believed that many people would die the following year if it rained on the Day of the Dead.

In recent history both All-Saints Day and Day of the Dead are celebrated by remembering the dearly departed. People visit the cemetery to clean and decorate graves and tombstones and light a candle for the lost loved-ones. In some parts of Hungary the custom of keeping a light on became a custom following the Second World War.