Ágnes Heller: Where there is no rule of law, there is corruption 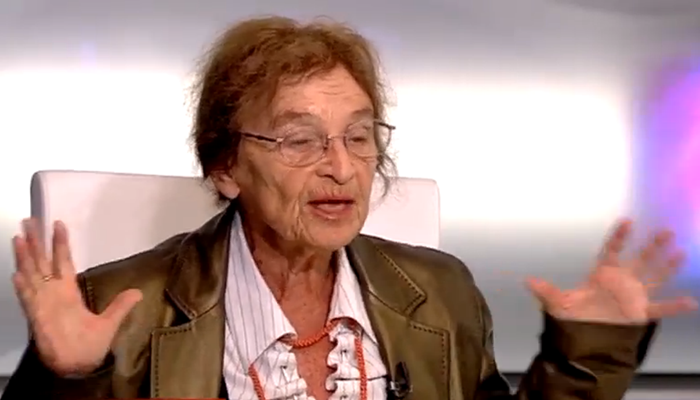 Internationally reknowned philosopher Ágnes Heller told ATV’s Olga Kálmán on Friday that “where there is no rule of law, there is corruption. The two depend on each other”.  Citing former SZDSZ politician Bálint Magyar’s book “Magyar Polip” (Hungarian Octopus) she said Hungary’s current political system was “based on corruption”.

On the subject of numerous changes made to the Fundamental Law since its adoption in 2011 and the recent crackdown on civil movements, Heller observed that in the United States the traditional constitution and civil movements are “sacrosanct”. “For two centuries civil movements have been fundamental to democracy. Civil movements give rise to civil organizations which, in turn, pressure governments for reform.”

Heller said it was the view of the current government that “intelligent people don’t listen to anyone, they dictate” and defined Prime Miniser Viktor Orbán’s fundamental behavior as one of “what I said, I said; what I explained, I explained; and what I want, I want; and nobody should have any say in the matter”.  She did not believe such behavior was sustainable given the government’s current environment.

Heller called the temporary suspension of the right of six Hungarians to enter the United States for reasons of corruption “a huge scandal” and a “strong action that expresses the (United States’) opinion”.  She could not think of a prior instance when the US banned invidividuals close to the government of an allied country. “They (Hungary) will try to hush it up but it is not possible to hush it up.”

When asked to account for Hungary’s tendency to completely disregard the opinions of its allies, Heller said the Orbán regime was such that ”everything the prime minister resolves to do is done, even when every sign indicates it should not be done”. She cited the highly controversial monument to the victims of the German invasion as an example.

Heller told ATV that unlike neighboring countries that have taken steps to address corruption “sooner” rather than “later”, in Hungary “everybody protects their own.  The government protects the people who belong to it, including those billionaires who made their billions from this political system and who support such politics”.

When asked how this was possible, she replied

Everything is possible with us because we cover our ears and close our eyes and say “they are the corrupt ones because they are accusing us of corruption”.  They are conspiring against Hungary. They always talk about international conspiracies. I don’t think the government in its entirety will react to this normally. In such circumstances a normal government resigns. Don’t expect such normalcy from this government.  But the minimum is that they try to do something with this information about those who are really corrupt.

Heller points out that instead of prosecuting corrupt politicians or businessmen, the Hungarian government decided to crack down on the very NGOs that were calling attention to corruption.

They initiated attacks and procedures against people who were political opponents, who did not do anything that violated the law, but they humiliated them and brought charges against them. But they protect the corrupt among themselves like the angel protects the first born.

When asked what could be done about it, she responded that “there is nothing we can do about it. All the power has been centralized, optimized. I do not know what follows but I do not trust in the government’s judgement.”

On the subject of how Fidesz managed to win all three elections this year by a landslide, Heller said “the majority of voters have no information” and “don’t even know what politics are”.  She said that “when Fidesz wanted to come to power” it took over the so-called “civil circles” (organized forums for public discussion) as well as networks of connections through which they were able to obtain power.  As a result of this, “the country doesn’t know what’s happening in the country”.

She points out that at present the political opposition has no network of connections through which to broadcast its political message and organize politically.

Critical to the future political life of Hungary in her opinion is that “discussion groups be formed in every village so that people learn how to debate matters” and that “we have something to do with our own lives”.

Make them understand why it is important to go and vote and why it is important to be informed about who they’re voting for.  This requires preparation.  It is possible to create such forums throughout the country where they discuss nothing but public matters. This must be done. Otherwise we will continue to live in a country where people vote without information and without thinking. … Circles need to be created where people can express their opinions and listen to the opinions of others. In order for something to change, it is necessary to change something.  Start debating.  People need to learn that they are responsible for the country’s situation.

Kádár’s goal was for the country to be apolitical. They should not express an interest in politics. You have the same thing with the Orbán regime. They don’t want the people inquiring about political matters. Fewer and fewer people are participating in elections.

She said the creation of such discussion groups was instrumental to grooming credible political opposition leaders.  “You cannot simply conjure up an alternative in a room somewhere and hope to get it accepted. You have to build an alternative around people’s needs and desires. It is not possible for three persons sitting in a room to sign a document that creates the alternative.  That doesn’t work.”

On the subject of the proposed internet tax, Heller said its goal was to create a “new limit on the freedom of speech”. She called the proposal “absurd”. “They will not be able to introduce it.  I do not believe the Hungarian people will tolerate this.”