Helsinki committee: Illegal immigrants should not be incarcerated 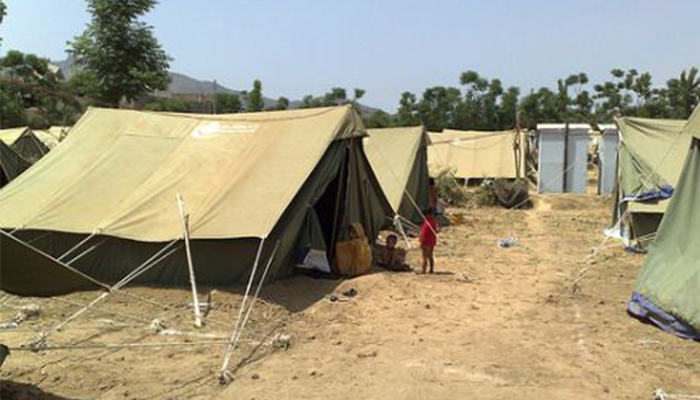 The death of an 18-month-old infant this week at a refugee camp in Hungary near Győr has prompted experts to speak out on the subject of refugees and their treatment in Hungary.  In Hungary last year, one in 80 applicants were awarded refugee status.  The Szeged refugee camp practically functions as a detention area for those entering Hungary in search of refuge within the European Union.

The Hungarian government struck a loud anti-immigration tone after the Islamic terror attacks in France of January 7 and 9.   This communication strategy was followed by Fidesz caucus leader Antal Rogan at a press conference in Budapest’s Keleti (Eastern ) train station on February 10 and was readily apparent in the parliamentary debate on the subject on February 20.

According to a report issued by the United Nations High Commission for Refugees (UNHCR) at the beginning of January, even though the number of people fleeing war zones in 2014 exceeded 50 million, the vast majority of refugees were taken in by the poorest countries.  One of the tables attached to the report ranks countries by the number of refugees they have taken in relative to their economic strength. The table divides the country’s GDP by the number of refugees living there as of the middle of last year.  The list is led by Ethiopia, Pakistan and Chad.  Hungary ranks 96th.  The more developed countries are generally ranked ahead of Hungary.  Despite the high numerator, developed countries take in so many refugees that they tend to be in the top third of the list.  France is ranked 42nd, the United States 40th, Germany 48th, Canada 54th, the United Kingdom 50th, Sweden 58th, Austria 65th, Switzerland 68th–all well above Hungary.

According to the report, as of the middle of 2014 the number of refugees worldwide reached 13 million, which is the high since 1996. The number of those who have abandoned their homes in search of refuge within their own countries has reached the previously unseen level of 26 million.

By definition a refugee is someone who has been accorded refugee status by a given country.  Until then, their status is that of an immigrant or one who has applied for refugee status, at least according to UNHCR Hungarian spokesman  Ernő Simon.  He says wars in central Africa, southern Sudan and Ukraine, and the spread of ISIS in the Middle East caused those figures to rise the second half of 2014, but those numbers will only be released in March or April of this year.

With regard to Hungary, the expert says that in 2014, 21,908 people from Kosovo applied for refugee status, 20,000 of which took place the last four months of 2014.  Simon attributes the radical increase to the domestic situation there.  After the general election of June 8, 2014 there was no government for half a year.  Even before that the situation in the country was generally hopeless.  Beginning in February several hundred Kosovars started arriving in Hungary on a daily basis.  On some days their numbers exceeded a thousand.  This wave suddenly ended last week after the Kosovar press reported that large numbers of illegal immigrants had been deported from the West, especially Germany.

Simon points out that there is no such thing as an “economic refugee”, only economic migrants.  A refugee is someone who is fleeing war or who has left his country for political, ethnic or religious reasons as defined by the 1951 Geneva convention on refugees.

Simon informs the Budapest Beacon that of those arriving from Kosovo, those belonging to that country’s Roma minority, which refers to itself as “gypsy”, “ashkali” or “Egyptian”, have the greatest chance of obtaining refugee status.

He says that of all the European countries, Hungary’s refugee acceptance ratio is the lowest.  The reason is that most refugee applicants leave Hungary for the West before their applications for refugee status submitted to Hungarian authorities have been processed.  In doing so, they violate the procedure.

One expert told the Beacon that Hungary is rather a transit country than a destination for immigrants owing to “the bad economic situation and difficult language.” Simon adds that many seeking refugee status already have relatives living in the West who have been granted refugee status.  Furthermore, many Kosovars can speak German to a greater or lesser extent, having worked in Germany, Austria and Switzerland as guest workers from Yugloslavia under Tito. Most of them are destined for the German-speaking parts of Europe rather than Hungary.

The question of refugees residing temporarily in Hungary recently received greater attention after revelations that an 18-month-old Kosovar girl with Down’s syndrome died of a lung infection at the Vámosszabadi refugee camp near Győr. Kisalföld reports that three infants were taken to hospital, including the two siblings of the deceased infant.

Hungarian Helsinki Committee spokesperson Zsolt Zádori said the tragic incident was “noteworthy”. It is rare when children die of a lung infection in Hungary.  Furthermore, the family was under state supervision, having been transported to the refugee camp in Vámosszabadi.  “The question is why the little girl was not taken to hospital,” says Zádori, adding that of all the refugee camps in Hungary, the conditions of the Vámosszabadi camp are very good in comparison to others. “The infant might have contracted the lung infection in transit,” he opines, adding that presumably the family had planned to travel on to the West.  Since the Vámosszabadi camp is open during the day, refugee seekers are free to come and go as they please. Furthermore, Austria is only 50 km away.  Zádori presumes that the child’s condition prevented the family from traveling on to Austria.

The situation in the refugee camp on the Serbian border where those caught crossing into Hungary illegally are taken, however, is very different.  There the conitions are “very bad”, according to the expert, in part due to overcrowding but also because the Szeged station practically serves as a detention facility, contrary to government claims.  “Illegally crossing the border is not a felony, only a misdemeanor, like speeding, and for this reason it should not be legal to incarcerate anyone,” says  Zádori.  From here the asylum seekers are sent to a refugee camp in Debrecen or, if they are lucky, to the Vámosszabadi camp.

Considering Hungary is only a transit country, we asked Zádori why Hungarian immigration officials don’t simply look the other way.  The answer is that Hungary received HUF 4.5 billion (USD 17 million) from the other Schengen region countries to patrol its borders with Ukraine, Romania, Serbia and Croatia, and Brussels holds Hungary to account for the money.