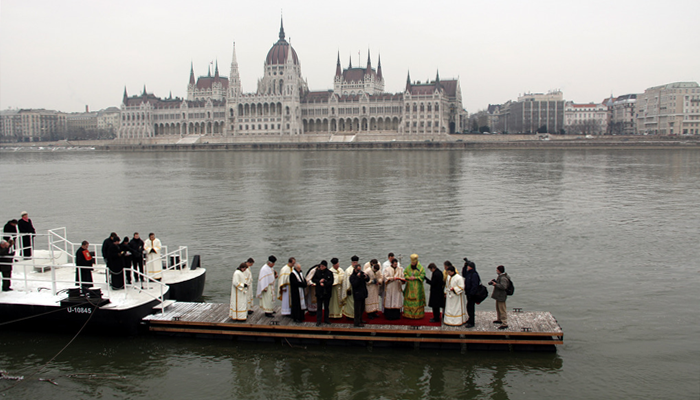 In Hungary, January 6th is the day of Vízkereszt (Water-cross) or Háromkirályok napja (Three Kings’ Day), and is the Christian holiday known in English as the Day of Epiphany.

Significant events celebrated on this day are:

1. The visitation of the newborn Jesus by the three kings bearing gifts

2. The baptism of Jesus by John the Baptist in the River Jordan

3. Jesus’ first miracle at the wedding in Cana when he turned water into wine

Vízkereszt marks the end of the Christmas season and is the first day of the Farsang carnival season which lasts until the day before Ash Wednesday. This day is also the Hungarian name day for anyone named after the three kings: Gáspár (Casper), Menyhért (Melchior), and Boldizsár (Balthazar).

Water christened on Vízkereszt became holy water and would be used to christen animals. People would also drink the water and pour it into wells.

In Catholic villages throughout  Hungary, villagers would christen everything with water. Holy water would be sprinkled on everything from cradles to tombstones and from houses to pigpens. In fact, folklore held that holy water could be used to heal humans and animals, too.  The belief that water has purifying and cleansing powers originates from ancient folklore attributing magical properties to water.

In Jászdózsa villagers would wish one another good health by dousing one other with water from the Tarna creek (a tributary of the Zagyva River), saying “May you develop neither pocks nor scabies!” (Ne legyenek se himlősök, se rühesek!).  They would even take cattle and other animals down to the creek for this reason.

In Kelenye and other villages around Ipoly people would water their gardens with the holy water to ward off evil spirits. Similarly, they would pour the water into the corners of stables. Parents would give their children a sip of the water so that they would remain healthy. People in Belapatfalva would pour the water into drinking water wells and put a few drops in the drinking water provided for animals.

Many Hungarians would store the Vízkereszt holy water for use later in the year. The water would be used to christen a pregnant woman’s bed and sprinkled into a newborn baby’s bathwater, on the heads of a young couple about to get married, on a dying person, and even on the recently deceased.

Vízkereszt water would also be used to treat headaches and as a cure all for any sickness, and many believed in its ability to ward off sickness.  Many held that it would drive away bad spirits and storms.  In Szeged people would use a few drops when baking bread.

Vízkereszt was also the day homes would be christened. Using a stick of chalk, villagers would write the first initials of the three wise men along with the number of the year on the wall of their house. They believed this act would protect their homes from being cursed by witches, while also preventing the house from being struck by lightening.

The Csángó Hungarians of the eastern Carpathians had a saying tied to the christening of homes:

To get our chickens to lay more eggs, we would wait on Vízkereszt for the priest who was walking around with his cross. The priest would come over to bless our house, and we would always sit him down on our bench. There was a cloth spread over the bench. Underneath the cloth were oats, barley, and corn. If the priest sat on the bench, they would say that our chickens would lay lots of eggs.

The christening of a home was called koleda. In Nyitra county in the villages of Ményhe, Béde, and Szalakusz, koleda lasted from the first of January until Three Kings Day, or Vízkereszt. The priest, the cantor, and two altar boys would visit each house. They would sing, the priest would bless the house as he walked around it swinging his thurible of burning incense, and the cantor would write the first letter of the names of each of the wise men on the door of the house. The family who lived at the house would then give the visiting priest and cantor a gift-bag that contained plums, nuts, bacon, and sausages. This food would later be split between the priest and the cantor. The cantor’s cut would be agreed upon beforehand as compensation for his services.

Around Szeged, the christening of homes often involved a custom in which the families would put wheat, sometimes apples, even feathers on the table to ensure good fortune with their crops and livestock.

In 1845 Ensel Sandor Reso recounted how the villagers greeted the arriving priest:

On Vízkereszt the priest would travel through the countryside, going from house to house to  perform the fashionable saintly practice. The head of each house, knowing in advance of the priest’s arrival, would wait for the priest with one plate of corn, or plate of peas, one pig’s foot, and an obligatory money donation.

January 6th also had a theatrical element to it not unlike that of the Bethlemezés performed on Christmas. The performance on Three Kings Day was called “The Walking of the Three Kings” (háromkirályjárás). Traveling from house to house groups of boys (it was not customary for girls to take part) would wear costumes and act out the journey of the three kings. An important prop used for the performance was a star fastened to a wagon.   Performances varied in detail according to the customs where the performance took place. For example, the Pest county performances were styled to include girls as the actors who wore white clothing with white paper hats. In Baranya, the “The Walking of the Three Kings” is a long and dramatic play, where Gáspár, Menyhért, and Boldizsár are individually introduced to the audience, more Christmas songs are performed, and there is even a donation-solicitation rhyme included to remind the audience to give.  The star is present in every version.

In the Northern Bánát, an area on the northern Serbian border with Romania, performances were conducted as follows:

In our community the Walking of the Three Kings were very uniform: the Biblical Gáspárt, Menyhért, and Boldizsár were performed by boys aged 10 to 14. They were dressed in white sheets signifying royal attire, wore white paper crowns on their heads, or caps which differed in color. One performer would carry the six-point red star (which would come out during the ‘Beautiful sign, beautiful star’ refrain of the song). The boys would perform the play between January 1st and 6th, and would have concluded performances on the first night of Vízkereszt. In Padé (now Padej, Vojvodina, Serbia) the performances ended following World War I. In Saján (now Sajan, Vojvodina, Serbia) the performances ceased in the 1930’s. Performances survived the longest in Verbica (now Vrbica, Vojvodina, Serbia). Nowhere else could those songs be heard . . .