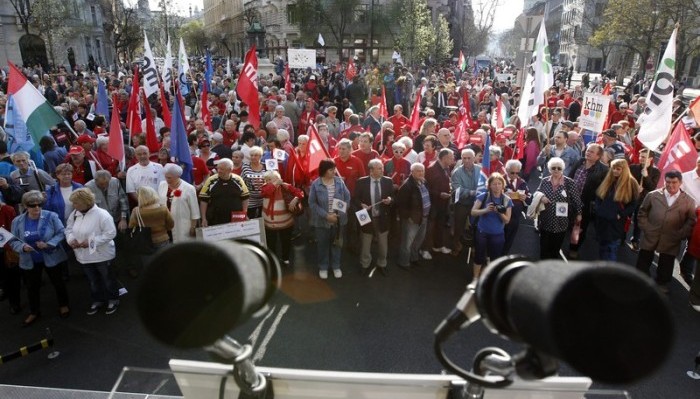 Left-wing and liberal parties held a joint demonstration in Budapest on Saturday in protest of the brokerage scandals that have erupted over the past six weeks.

MSZP deputy chairman Zoltán Lukács told the gathering that the tens of thousands affected by the collapses joined the ranks of other Fidesz victims, including hundreds of thousands who lost their disability pensions, their private retirement savings, the right to sell tobacco products and their companies.  “All of us are victims of the Orbán system,” proclaimed Lukács, promising the crowd “We won’t forget!” and “They will pay for all of this!”   The crowd reacted by chanting “To prison!” and “Dirty Fidesz!”

The socialist politician called for the creation of “a normal life in Hungary.”

Ferenc Pad, the joint MSZP and DK candidate in Sunday’s by-election in Tapolca, told the crowd that the Orbán government was not interested in the problems of everyday Hungarians.  Calling the government a “hotbed of illegality” whose friends “act on inside information to steal”, the left-wing candidate told the crowd “we shouldn’t be locking up stores but government officials instead!”

DK politician Szabolcs Kerék-Bárczy said Quaestor CEO Csaba Tarsoly was a “cheap straw man” in comparison to the “gangsters sitting in government” who only informed their friends about the brokerage company’s imminent collapse. He called for general elections not due until 2018 to be brought forward.

Speaking on behalf of the Hungarian liberals, former deputy central bank governor Zoltán Bodnár said the “greedy Fidesz regime does not even see when a ‘friendly’ company steals HUF 150 billion from everyday people.”  He said that in a market economy with greater risks comes the potential for greater loss but this was not the case with Quaestor, but rather “criminal negligence” on the part of the government and the central bank.  Bodnar called for the government’s resignation.

PM spokesman Bence Tordai said the current system is based on Fidesz oligarchs stealing the money of everyday people, and that in a normal country these people would be in jail.  He mentioned that in Romania dozens of government officials had been arrested on suspicion of corruption.

A number of civilians were given the opportunity to speak at the political rally.  A shepherd from the Hortobágy deprived of the right to pasture his flock on state-owned grassland said “the sheep should remain, Orbán should hit the road.”  A retired miner called for the government to compensate the small investors for all of their losses.