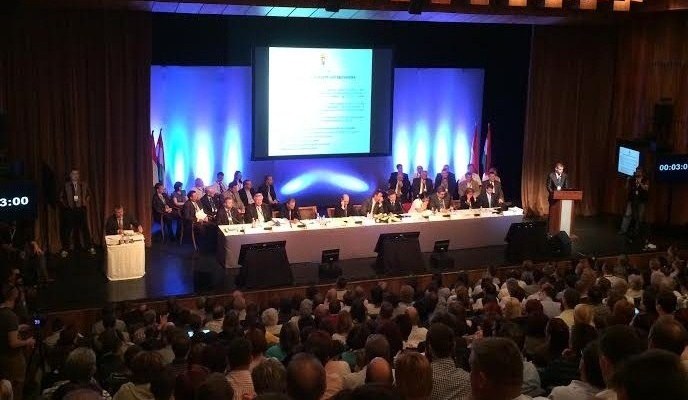 On Thursday several hundred people attended a forum on Paks II at a cultural center in Páks, home to Hungary’s one and only atomic power plant, to discuss government plans to build two new reactors to replace the four existing reactors.

The 400-person hall was filled to capacity.  Many chose to watch from the corridor or on a giant screen outside Paks’ Csengey Dénes Cultural Center.  Those wishing to ask questions had to register beforehand by filling in a form indicating whether the individual in question wanted to ask the question or authorized the moderator to ask it on his or her behalf.

Attending the event were a number of governing party officials, both on stage and in the audience.  Among others, László L. Simon, undersecretary at the Office of the Prime Minister, Attila Aszódi, government commission for Paks II, János Süli, Paks mayor, and a number of county commissions and members of parliament from western Hungary,

The head of the Baranya County Government Office of Environmental Protection, Timor Schwarcz, explained that the project needed an environmental protection permit, and that one of the conditions was an environmental impact study not only on Paks but on other settlements in the affected region, including Dunaszentbenedek, Uszód, Foktő and Gerjen.  He then introduced László L. Simon, who explained that the purpose of the presentation was to inform public opinion so that it could formulate observations.

The undersecretary was followed by government commissioner for Paks II Attila Aszódi, who said that in 2014 32 precent of the energy consumed by Hungary was imported, and that in the years to come a number of old power plants were due to be decommissioned.

The expert explained that the construction of Paks II would enable atomic energy to supply 40 percent of Hungary’s energy needs through 2100, and that “this was the cheapest way to ensure the supply of electricity.” In his opinion, it is better for the country to generate its own nuclear power than to have to import energy.

Aszódi reminded the audience that in January of 2014 an agreement was concluded between Hungary and Russia, followed two months later by a financing agreement.  The commissioner said that a total of six thousand permits were needed in order to begin construction of the new reactors, and the environmental protection permitting was to take place over the course of 2015, with the start of construction planned for 2018.  The reactors are expected to come on line in 2025 or 2026.

According to Aszódi the environmental impact study will be some 2000 pages long.   He explained that the two new reactors would be built 400 meters to the north of the existing four.  At the peak of construction the project would employ around seven thousand people.  The construction would be noisy, but that apart from the residents of Dunaszentbenedeken, the noise would not disturb anyone.  Aszódi also said that “there would be some air pollution because of the construction.”

He assured the audience that “the construction site has no value from the point of view of nature.  While the area around it contains protected species, they are protected species that are also found elsewhere, and for this reason they will not die out.”

Aszódi explained that the only manner in which the two new 1100-megawatt reactors would impact the environment was in the amount of heat to be discharged into the Danube.  In his opinion, fish that like warm water will continue to thrive, while those species that prefer cooler water will migrate somewhere upstream or downstream, but will not die.

At this point the expert presented various data via a Power Point presentation purporting to demonstrate just how safe the project was.

Aszódi explained that according to the international contract Hungary is responsible for arranging the final storage of the spent fuel rods, adding that the decommissioning of the nuclear power plant would not take place for another hundred years.  The commissioner said he did not like the expression “atom cemetery” because it “injects feelings into a matter that is not an emotional question but a technical one.”

When asked how much warmer the Danube would be, the university professor answered that it would not be warmer but that the heat plume would be longer.   In response to another question he said the incidence of cancer is no higher in the vicinity of Paks than the rest of the country.

In response to whether the project would result in a decrease in the cost of commercial electricity, Simon answered that the government had not yet reached a decision on this, to which Aszódi added that “news appearing in the press was cause for some misunderstanding.”

A representative of the Védegylet green organization, András Jánossy, asked five questions, each of which had to be registered separately beforehand.  Among other things he asked how Russian nuclear planners were to meet Hungarian security requirements, to which Aszódi answered that the “Russian party is familiar with Hungarian regulations and will plan accordingly.”

Jánossy also complained that the environmental impact study data was “not concrete enough” and the “deep biological investigation was missing”, to which Aszódi responded that “the Russian planners need to complete geophysical, geotechnical studies, and that these need to be built into the planning.”

The activist also objected to the fact that the “environmental impact study was prepared on the basis of an earlier condition” to which Aszódi responded that “this can arise in every engineering project” and that “if the circumstances change greatly, then the authority will intervene.”

Jánossy called “unacceptible” the fact that the decommissioning of the existing four reactors was not taken into consideration when preparing the impact study.  He said “radioactive dust will circulate in the air all the while people are working on the two nuclear reactors”.  Aszódi responded by saying that he “strongly disagreed” and that “numerous environmental studies prepared over the past several decades confirmed that such dangers do not exist when decommissioning reactors.”

In response to another quesiton, Aszódi said there is discussion of building another bridge across the Danube and he hoped that in time it would come to pass.

The discussion became heated after the university professor answered a question posed by EnergyClub (Energiaklub) geologist Zsuzsa Koritár.  “I am not revealing any secrets by saying that I am not among friends,” said Aszódi, who added he experienced physical pain when reading the Energiaklub study which, he mantains, contains many seriously professional mistakes.

During the break the Budapest Beacon conducted a short interview with government commissioner Zoltán Horváth.

Budapest Beacon:  Russia no longer resembles an autocracy so much as a dictatorship.  Furthermore, in violation of international law it annexed part of Ukraine.  Moreover, it seems to maintain close relations with Jobbik.  What is your opinion about such a Russia undertaking so large a project in Paks?

Zoltán Horváth:  I cannot answer your question because as a government commissioner I represent the environmental protection authorities at today’s forum.  The governmental office is examining whether the contractor satisfies the applicable legal requirements in accordance with the laws in force.  That is our task.

BB:  Is it a matter of indifference who the contractor is?

ZH: That is all I can say in response to your question.