Hundreds demonstrate in Budapest for an open and diverse Hungary 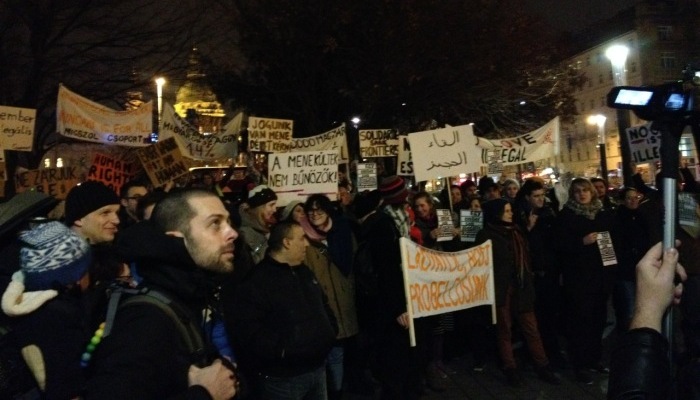 On Friday an organization by the name of Migrant Solidarity Group of Hungary (MigSzol) posted the following open letter to the government of Hungary protesting the anti-immigrant and xenophobic statements of Prime Minister Viktor Orbán and Fidesz caucus head Antal Rogán:

To the Hungarian Government led by Viktor Orbán,

In the wake of the tragic events in France at the offices of the French satirical newspaper “Charlie Hebdo”, voices from the entire international community rose up in protest at the senseless killing of human beings. With them, anti-immigrant and anti-Islam voices, however, rose as well. It is shameful, but by no means surprising, that Viktor Orban, the Prime Minister of Hungary, was once again one of the most vehement political leaders speaking against immigrants coming to Europe, and the cultural and ethnic minorities already living here.

Attending the solidarity march in Paris, on 11 January, Prime Minister Orban was quoted by EUObserver as saying that economic immigration “is a bad thing in Europe […] because it only brings trouble and danger to the peoples of Europe”. Not content to limit his comments on European immigration policies, Prime Minister Orban went on to paint in violent brush strokes his views on what Hungary as a country should aspire to be:

“While I am PM, Hungary will definitely not become an immigration destination. We don’t want to see significantly sized minorities with different cultural characteristics and backgrounds among us. We want to keep Hungary as Hungary”.

In this line, Antal Rogán, the Fidesz party caucus leader, gave an interview on Hungarian state TV that dispelled any remaining doubts as to the Government’s future direction of Hungary’s immigration policies by speaking against “…the presence of Muslim communities [which] overturns the inner order of Christian countries,” especially the economic migrants who “…bring traditions that are completely alien from Hungarian traditions.” This is a perverse conflation of the politics and security logic of “terrorism” in Europe with the question of migration in Europe. The deep, complex webs of precarious living forced upon people fleeing poverty and violence in their native countries must not be obscured by the fear mongering at the heart of the contemporary global regime of (counter)terrorism. Prime Minister Orban’s rhetorical abuse of the Paris violence cannot elude the questions about the violence and the socio-economic precariousness that Hungary’s present asylum regime forces upon people in need of hospitality and support.

The European Union itself seems to have forgotten its once much-trumpeted motto of “United in Diversity”, and now casts a wary and suspecting eye on those in search of better lives. It prefers to “secure” its borders and while people die trying to reach it, as Lampedusa and similar, continuing tragedies remind us. In these circumstances, Prime Minister Orban appears as the pioneer politician who expresses what his EU counterparts silently put in practice.

It is with great concern and alarm that we, the Migrant Solidarity Group of Hungary (MigSzol), receive such developments. We believe that Hungary should be a diverse and inclusive society. We must never forget the Hungarian people’s own history of migration, from the founding of the medieval kingdom by immigrants from Asia to the exodus of its patriotic citizens following the Soviet violent repression of the 1956 Revolution. In its work, MigSzol seeks to help establish a Hungary that does not forget its past. We therefore urge the Government of Hungary not to arbitrarily and systematically put people in detention camps, but instead promote a society that does not cower in the darkened pit of fear and hatred of what is different.

As an answer to Prime Minister Orban’s stance on issues concerning migration, MigSzol will organize a demonstration on Monday, 19th of January 2015, 6 pm in Budapest’s Deák Ferenc Tér. Through this public action we oppose and condemn Prime Minister Orbán’s recent xenophobic and bigoted comments, and make a stand for solidarity with all migrants attacked in these remarks. For MigSzol, discourses and policies based on hate and intolerance are not acceptable in Hungary.

According to the organization’s website, MigSzol is an independent organization which is struggling to realize political and social rights for refugees and asylum seekers in Hungary.  “We are working for a Hungary where there is no need for such titles as ‘refugee’ and ‘immigrant’.  We fight against human identity being determined by bureaucratic categories.”

Roughly two hundred protesters, mostly foreigners, gathered in Pest’s Ferenc Déák square Monday evening to protest recent anti-immigrant statements by Hungarian Prime Minister Viktor Orbán and Fidesz caucus leader Antal Rogán.  Hungarian liberal publicist and philosopher Gáspár Miklós Tamás told the crowd that the West was largely to blame for immigration, and that the government of Hungary was “not only criminal and revolting, but stupid and ridiculous as well.”

Announced only three days earlier, the event resembled a flashmob more than it did a formal protest, with protesters chatting cheerfully and taking photographs of one another’s placards and banners, of which there was an abundance.  Despite the demonstration being peaceful and expressly quiet, each protester had something to say.

The first was an English-speaking immigrant who called on Orbán to acknowledge that he had erred. She was followed by a representative of the MigSzol Group, Margit Barna, who proceeded to quote various statements made by Orbán over the past few days, to which the participants patiently listened without whistling or jeering.  She then addressed the Prime Minister:

The spokesperson continued:  “The reason we are here is to say that Viktor Orbán and his fellow party members do not speak in our name.  Hungary is not equivalent with megalomania or the invasion of country and spirit by the servants of a power-crazed leader.”

According to the organizers, Orbán is only looking for a new scapegoat, and has found one in the form of foreigners living in Hungary.  “Orbán is losing his supporters,” Barna said.  “Soon not one societal group will remain which will not be considered guilty for reasons beyond its control.  First it was those who thought differently.  Then came the Roma, the poor, the homeless, then the members of the lesbian, gay and bisexual community, teachers, students and finally now immigrants.  But that is not the point of view of Hungary, but rather that immigrants should be received and spoken to with respect:  that is the Hungarian point of view because it is a human point of view.”

The MigSzol representative went on to tell the crowd that Orbán must apologize for his anti-foreigner statements of the recent past to foreigners living in Hungary.  “He must apologize to the refugees who have fled persecution in their countries of origin, and to the other migrants who sit on school benches next to our brothers and children.  He must apologize to our doctors, store keepers and to the best athletes of our favorite teams, as well as to those held in prisons who, among the contemptuous stares of their guards, pray, their only sin being born in a more oppressive and dangerous country where they did not wish to live lives unworthy of human beings, or did not wish to die of hunger.”

Barna told the crowd, however, that Orbán will not do this because “he has lost all commonsense, even though our borders do not exist to be protected, but to designate the start of an area within which we, and others, can feel good about ourselves.”  She added that “we need immigrants to operate on our parents, teach our children or to take care of us in the event so many of us have left here, even though Orbán says they are just traveling and working a bit.”

Barna then spoke about the “inhuman conditions” into which Hungary receives immigrants, and spoke of the Immigration Office as well, whose director “just whines, like a child, that once again so many have come here.”

She said MigSzol wanted the country’s leaders to take an example from countries like Austria, and demanded that immigrants be given access to basic services such as language training and health care.  She called on the government to make it easier for foreign diplomas to receive accreditation in Hungary, and for a practical exam to be sufficient for technical workers to prove their professional competence.   MigSzol wants the Immigration Office not to distribute citizenship in a corrupt manner as can be read in the news, but that it be given to everyone who has lived here long enough, and to justify ny decision not to award Hungarian citizenship.

Barna closed her speech with the following statement:

“MigSzol wants a Hungary that is not the country of phoney Christian pharisee-like leaders.  We do not want the kind of Hungary where migrants not only have to be afraid of speaking out at a demonstration like this, but even attending one.  MigSzol wants a Hungary where the immigrants and refugees can be equal legal members of society.  Because Hungary belongs to everyone, not only to Orbán!”

She was followed by well-know liberal columnist and philosopher Gáspár Miklós Tamás, who said there was only one other matter to which he wished to call the crowd’s attention.

“The reason the situation is intolerable in those countries from whence the people fled to us, because the circumstances surrounding the collapse of the colonial empires left no normal political community.  These are the long-term consequences of colonialism and imperialism, for which the West is responsible.  The same West which today builds fences to prevent people fleeing the areas they destroyed from gaining access to the minimum to which every human being is entitled.”

He told the crowd that Hungary’s immigration detention facilities clearly demonstrated “that the current Hungarian state considers those who escaped from abroad to be criminal, diseased and pathological, like a contagion”.

Tamás asked what the basis was for distinguishing between the human rights of citizens and non-citizens.  “If human rights turn out to actually exist, then they must be universal!  He who assumes human rights for some but strips others of them is a racist.  Even though I believe that despite every terrible thing that has happened to Hungary over the past few years, racists are still not in the majority.  And if racists do not make up the majority, then nobody should undertake racist government policies in their name.

“When fellow human beings flee atrocious places and arrive to us in atrocious condition, who has the audacity to say that migration is bad or that it’s a crime?   The Hungarians who came here from Asia, who were they?  The hundreds of thousands who fled Hungary in 1956, who were they?  The half a million who have left Hungary in the past few years, were they not economic immigrants?  Isn’t our emigrant someone else’s immigrant? . . . How dare they govern us on such an intellectual level?  It is both degrading and ridiculous!”

Tamás concluded his speech with the following statement:

“This government is not only criminal and degrading but stupid and ridiculous as well.  It cannot remain in power in the long run because what is not killed by ethical outrage will be killed by a sense of humor.”

He was followed by a German student named Teresa who has lived in Hungary for two years.  Teresa told the crowd in English that she had met helpful, open people in Hungary and liked living here, and that in her opinion immigration was not a threat but an opportunity that strengthens us.  The full text of her speech can be read here. 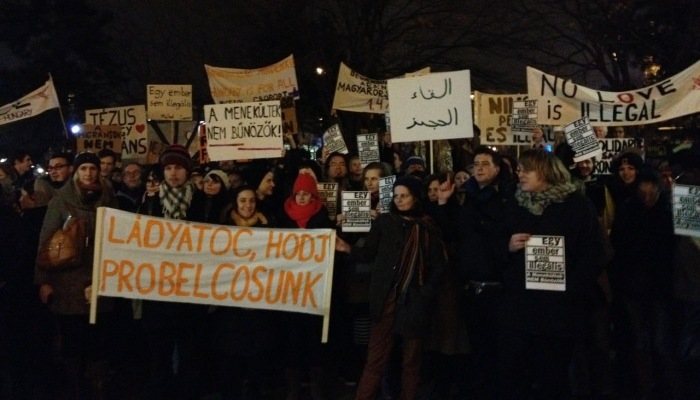 At the end of the demonstration the participants stood for a large group picture.