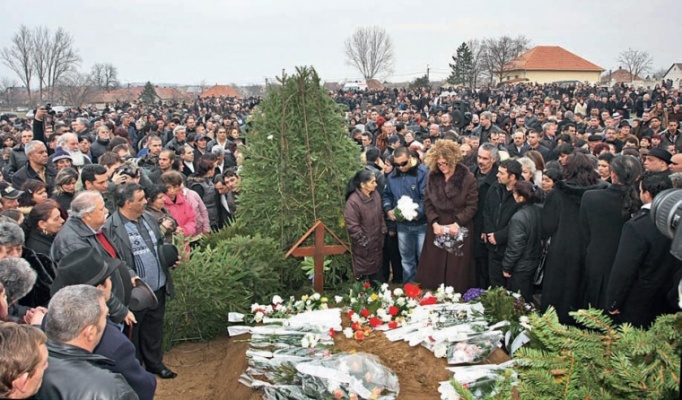 Earlier today the Budapest court of appeals formally upheld last year’s court decision sentencing Árpád and István Kiss, and Zsolt Pető to life in prison for a series of murders targeting Hungary’s Romani minority between July 2008 and August 2009.   The court also upheld the thirteen year sentence meted out to István Csontos, who drove the getaway car for the last two murders.

Brothers Árpád and István Kiss, and Zsolt Pető  terrorized the Roma inhabitants of several villages in eastern Hungary in the period, attacking Roma homes at the ends of different villages, killing six, including Róbert Csorba (27) and son Robi (5) whose funeral in Tatárszentgyörgy is pictured above.

The police arrested them in 2009 .  In 2013 the first-level court sentenced the Kiss brothers and Pető to life in prison.  At the time, their accomplice, István Csontos, was sentenced to 13 years after confessing to the crimes.

The second-level court proceeding started in April 2015.  Lawyers for the defense asked for a retrial, claiming the first-level judge was biased and that the police investigation had been negligent.

The appeals court upheld the verdict and the sentences.