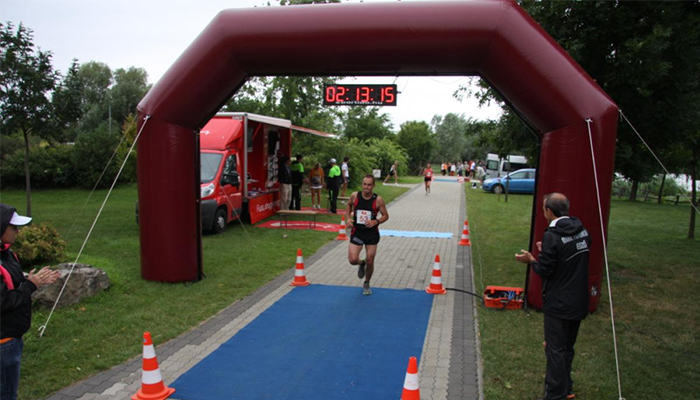 Last week’s tragic death of extremist sportsman Viktor Kovats during a practice jump in China overshadowed news from Italy that two Hungarian athletes had won the world’s first ultra triathlon.  Jozsef Rokob and Ferenc Szonyi swam 3.8 km, bicycled 180 km, and ran a 42 km marathon every day for 30 consecutive days for a total of 114 km of swimming, 5400 km of bicycling and 1260 km of running to take first and second place.

To get a sense of the distances involved imagine swimming across the English channel from Bournemouth, England to Cherbourg, France, bicycling to Moscow and back, and then running from Paris to Budapest.   Of the 21 competitors entering the competition, only eight completed the grueling event.

Rokob’s home city of Komarom celebrated news of his victory by opening municipal swimming pools to all free of charge and organizing various public sporting events and trainings.

Second place winner Ferenc Szonyi, who took first place three years ago in the world’s first Double Deca Triathlon (20 consecutive triathlons), told Klubradio on Tuesday the hardest part was dealing with stress related injuries to ligaments and tendons which accumulated over the course of this unprecedentedly grueling event.

For Rokob it was not so much injury but the steep grades and the cold temperature of the water that posed the greatest challenge. “The pain goes away, the glory lasts forever.”  Although Rokob told reporters that he felt he had the strength to continue for another 10 days, such competitions are not won on strength alone. “Less than one percent possess the conditioning and attitude necessary to attempt something like this”.

Neither Rokob nor Szonyi have plans to repeat last week’s stunning display of superhuman strength and stamina in the near future. May their names echo down through the ages like that of Pheidippides (or was it Philipiddes?) who according to Greek legend ran 42 km without stopping bearing news that the Greeks had defeated the Persians at Marathon.