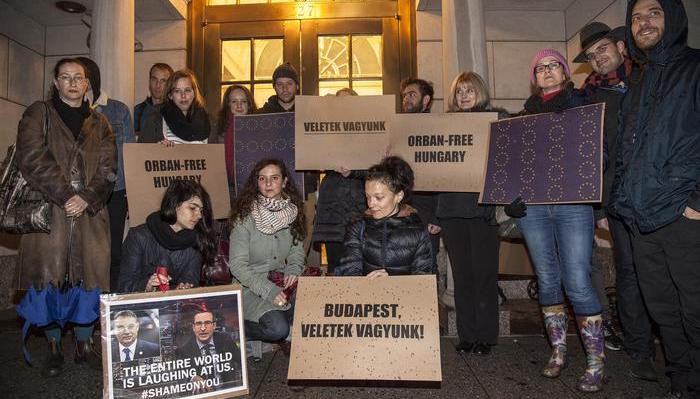 A demonstration that was held in New York City within the framework of Hungary’s “Day of Public Outrage” on November 17 was visited by the New York Police Department. The police were called by employees of the Hungarian Consulate, after one of whom went out to take photos of the two dozen people and their signs first. Officers arriving at the scene found no reason to intervene in the situation and informed the protesters that they are free to continue their presence there.

Júlia Standovár, a postgraduate student at School of Visual Arts, organized the New York protest over the course of a day. She said the demonstrators were mostly Hungarian intellectuals living in the city who are following current events back home. First she recognized somebody coming out of the embassy to take photos of them with a phone. A few minutes later, law enforcement arrived, suggesting that the consulate had phoned them up. Standovár said the policemen were “really polite and did not seem to understand why the consulate had called them”, adding that they assured protesters they have every right to stage a protest in front of the building.