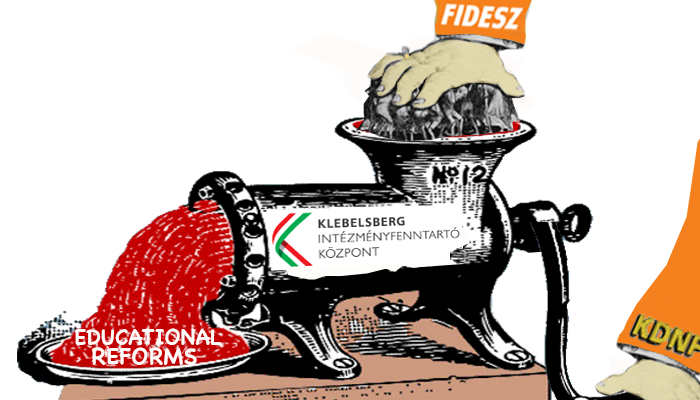 “The elementary requirement of transparency is not assured.  There has been no example of this for decades.” – Report on educational reforms introduced under second and third Orbán governments.

According to a study release this week by the Educational Research and Development Institute (OFI) entitled “Rule and functional change in the world of public education”:

The 244-page report makes it crystal clear that the educational reforms introduced under the second and third Orbán governments have failed, in large part because the contemplated reforms were never properly thought through and implemented all at once.  In place of a highly decentralized, flexible system which capable of addressing the specific needs of local communities, Fidesz imposed a highly centralized system lacking strategic vision that is both secretive and stifling in which everything is controlled from the top down, even though the ones in charge have no idea what they are doing or how their decisions are impacting the every schools they are responsible for maintaining.

The report notes that the decision to centralize the administration of public schools following their nationalization in 2012 went against the general European trend towards decentralization.   While centralization is not necessarily a bad thing, writes the report, the manner in Hungary’s highly decentralized public education system was centralized virtually overnight is an unmitigated disaster.

“None of the professed goals of centralization have been met” writes the report.  “The Klebelsberg Institutional Maintenance Center (Klik) only serves to obstruct the daily operation of the schools it maintains.”

The researchers found that the day-to-day operations of schools have been greatly complicated by senseless administrative tasks which divert enormous energy from teaching.  “It really upset me when they ask for the twentieth time how many students are attending the ethics class and how many the faith class,” says one of the school directors.  Another complains that the demands of his superiors leave him little time for anything else, adding that “I am responsible for everything, but have no right to decide anything.”

Two-thirds of school directors surveyed complained about the loss of institutional autonomy.  “The institutions were stripped of their financial autonomy.  In this way even the smallest procurement requires a lengthy administrative period, resulting in a system that is expressly inflexible” write the researchers..  Ever since Klik assumed responsibility for maintaining school property, there is no preventative maintenance to speak of, repairs are not made unless they are urgent, and schools persistently suffer from a chronic shortage of materials ranging from chalk to toilet paper.

Furthermore, schools no longer have an incentive to generate revenues because all revenues automatically go into a common fund.

According to the study, what teachers find most objectionable is the requirement that they teach 32 lessons a week instead of the previous 22 lessons, even though teachers already spent more than 40 hours a week preparing and holding lessons before the reforms.  Furthermore, the staff rooms of many schools are not large enough to accommodate so many teachers at once.

The educational districts only deal with day-to-day matters.  In practice, their activities are limited to executing orders coming from the center and communicating to Klik the schools’ needs.  According to the researchers, characteristic of the educational districts is “a complete lack of strategic thinking.”  The researchers conclude that the new system is institutionally incapable of paying attention to local interest, even though this is vital in order for any system to function properly.

The study identifies as another problem the fact that there are large differences in the sizes of the educational districts, with some containing as many as twenty different schools.  The new educational districts match those of the new government administrative districts, even though there is nothing to warrant this from a professional point of view.

Whatever the merits of centralization, poor central planning is responsible for most of the school’s day-to-day financial problems.   The researchers point out that Klik is not organized around any financial model, as a result of which Hungary’s centralized system of school administration consists of little more than issuing directives and collecting information for which the simplest software is not available.

Chronically underfunded, Klik is incapable of paying suppliers in a timely manner.  Eager to minimize expenditures whenever possible, it only approves requests for funds it deems are essential to keeping the doors open and the lights on.  Even then, a number of schools  have had their utilities turned off due to non-payment.

Poorer schools no better off now than before

The reason given for nationalizing public schools was the purported need to create equal opportunity and a system where every student got more or less the same regardless of whether he or she lives in a rich community or a poor one.  However, according to the report, apart from imposing uniform textbooks, nothing of substance has happened in terms of improving the level of education in poorer communities.  “Presently Klik does not act as a maintainer, even though only Klik is in a position to have professional insight into this question.  In this way, previous inequalities persist” writes the report.

Furthermore, a recent law permits segregation in the case of private schools operated by recognized churches.

If Klik possesses insight into the educational districts and the public schools it maintains, it is not saying.  The researchers note that “useful information about operations cannot be obtained by researchers . . .  either on the level of Klik, the education districts, or the schools, not even with the help of other support institutions belonging to the ministry.” The result is a system characterized by “complete secrecy” and “ponderous organizational behavior” in which decision making is only entrusted to the highest organization levels.  The researchers even complain that many of the educational districts and schools they approached were either unable or unwilling to provide them with information.

Educational researcher Zoltán Gyōrgyi writes “the closure, lack of confidence indicates that the system that has been introduced fails to seek dialogue with public education stakeholders and therefore makes the system unaccountable to society.  With such an approach it is impossible to achieve positive changes.”

In summary, in place of real educational reforms, Fidesz created a highly centralized, inflexible, poorly funded system suitable for little more than handing down orders, with little consideration given to the needs or concerns of the schools themselves which “does not lend itself to conflict resolution and avoidance” writes the report.

Teachers up in arms

Thousands of teachers across the country are demanding a rollback of sweeping educational reforms implemented under the second and third Orbán governments.

Fed up with the inability of the teachers trade unions to protect their interests in the face of massive government defunding and restructuring of public education, educators across the country are banding together to form their own interest groups and threatening to strike if their demands are not met.

On such organizations, the National Educational District Association (OTÉ) has denounced as “illegitimate” roundtable discussions proposed by the Ministry of Human Resources for later this month.

Under pressure from rank and file members, Teachers Trade Union (PSZ) president Mrs. István Galló called for demonstrations to be held in Budapest on Saturday, February 13th and warned that a general strike was likely to take place March if teachers’ demands were not met.

The Teachers Democratic Trade Union (PDSZ) led by László Mendrey has agreed to participate in the demonstration, as well as the one organized by OTÉ for February 10th.  An implacable critic of the ill-conceived and poorly executed education forms of the past five years, Mendrey has proposed that PSZ and PDSZ form a joint strike committee.

Although willing to acknowledge that they had taken centralization too far, Minister Balog told Galló on Friday the government was not willing to agree to make any “structural changes.”