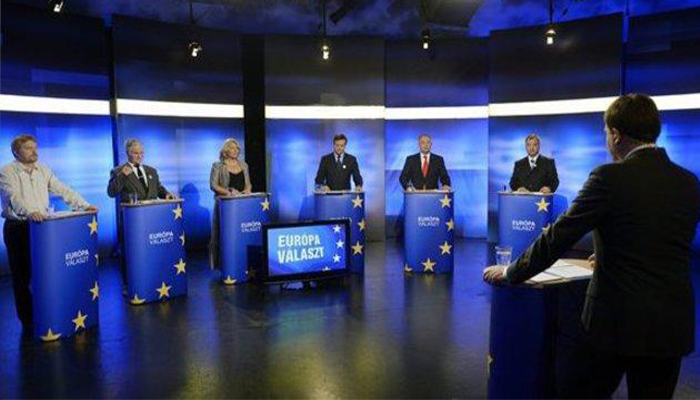 Each candidate had the opportunity to deliver three two-minute speeches – two on topics provided by ATV and one on a topic of their choosing – and three minutes worth of rebuttals.

Each spoke on whether they felt EU membership had been beneficial or detrimental to Hungary over the past ten years.  They were then asked to talk about what changes they envisioned for the EU and Hungary’s place in it.

Kasler complained that he had only been informed of the rules of the debate that morning and had been given a different set of questions.  He claimed Haza Nem Elado was not a “business party” and criticized other small parties for fraudulantly collecting endorsement signatures in the Hungarian general election last month.  Kasler argued that the European Union had enabled multinational companies to obtain new markets at minimal cost with little tangible benefit for Hungary.  He condemned government plans to build two new reactors at the Paks atomic energy plant instead of making use of renewable energy, pointing out that even a small leak would render Hungarian products unsellable, and a larger one could render Hungary uninhabitable.

Toth criticized the mainstream parties for their role in “selling out” the country and Jobbik for failing to accomplish anything meaningful.  The debate assumed a decidedly personal tone when Toth announced that information concerning the death of his son twenty years earlier had been inexplicably classified and that none of the parties he had approached had brought any clarity or closure to the situation.  He criticized Jobbik MEP Krisztina Morvai’s advocacy of the “rights of victims”, saying that greater emphasis needed to be placed on crime prevention.

Together 2014-PM candidate Gordon Bajnai devoted much of his time to criticizing Jobbik for its anti-EU rhetoric and behavior, pointing out that Jobbik MPs had burnt or otherwise defaced the European Union flag on many occasions, and had repeatedly stated that Hungary would leave the EU under a Jobbik government.  He accused Jobbik of fomenting hatred, pitting Hungarians against one another, and of representing the interests of Russia and other powers to the detriment of Hungarians and Europeans alike.  He warned that if Jobbik ever came to power it would result in civil war.

In a debate otherwise devoid of statistics, Bajnai criticized the second Orban government for negotiating HUF 350,000 (USD 1,600) less per capita in the way of European grants for the 2014-2021 funding period.  He said anti-EU and anti-multinational rhetoric threatened the jobs of 700,000 Hungarians, and that the loss of EU membership would deprive land owners of HUF 68,000 (USD 320) of subsidies per hectare.  Bajnai warned that in this case the Hungarian forint/Euro exchange rate would increase to around HUF 400.  He stressed the importance of sending delegates to Brussels prepared to represent the interests of the Hungarian people, even when this meant opposing the government’s official policies.

Bajnai likened EU development grants to “discovering mineral wealth underground” and warned the European Commission was on the verge of suspending Hungary’s participation in such programs due to lack of transparency and corruption.  “These days it comes as a surprise if Lajos Simicska’s company doesn’t win an EU tender,” he said.

Jobbik candidate Morvai said Hungary’s EU membership had been “disastrous”, claiming it effectively dated back to 1990, that is, two years before the Maastricht treaty and fourteen years before Hungary’s accession to the EU.   She said it was a “lie” that Jobbik intended to take Hungary out of the EU, but that her party envisions a more just European Union in which Hungarians are properly remunerated for their work, as well as a a looser alliance of nations, each pursuing their own policies within a broader European framework.  Morvai said EU membership had deprived Hungarians of the right to produce their own food and other “basic human rights”.

Speaking without notes, LMP candidate Tamas Meszerics called for greater democracy and transparency in the EU decision-making process, claiming at one point that “the central committee of the Hungarian Workers Party operated with greater openness than the European Commission”.   Meszerics criticized EU members for competing excessively with one another for capital investment at the expense of workers and the environment.  He also criticized previous Hungarian governments for making too many concessions, and the current government for waging a false “war of independence” against Brussels for the sake of political expediency.  Meszerics said greater emphasis should be placed on formulating practical European solutions to real European problems.  He said his was the only party that steadfastly opposed plans to build new reactors at Paks.

MSZP lead candidate Tibor Szanyi said joining the EU was the most important decision made in Hungary’s thousand-year history.  He said his party planned to use Hungary’s EU membership to advance its five-point platform and to combat the pernicious policies of the Fidesz-KDNP government, including the practice of subjecting foodstuffs to a 27 percent value added tax.  Szanyi pointed to the fact that Jobbik chairman Gabor Vona had given numerous interviews and delivered numerous speeches opposing EU membership as evidence that Jobbik candidates had no place in Brussels.  He said a vote for any left-wing party other than MSZP was a wasted vote because MSZP delegates would sit with the European Socialists, the largest and most influencial of all the European parties.

Notably absent from the debate were candidates from the governing Fidesz-KDNP alliance and Ferenc Gyurcsany’s Democratic Coalition (DK).

Fidesz, which is expected to garner between 52 and 57 percent of the votes on Sunday, offered no explanation as to why it declined to participate.

Gyurcsany told ATV that DK candidates did not wish to “legitimize” Jobbik by appearing on the same stage with them.

(Editor: DK’s decision not to participate in the debate merely demonstrates the extent to which Gyurcsany’s party is out of touch with Hungarian voters.    It is not for Ferenc Gyurcsany or DK to “legitimize” a rival party, but for voters.  For better or worse, they have done so.  Jobbik received close to a million votes, or 20 percent, in the April 6 general election. Jobbik is no longer a fringe, regional party confined to the poor regions of north-east Hungary, but a mainstream party enjoying strong grass-roots support throughout the country – an astonishing development for which Ferenc Gyurcsany deserves much credit.  The day he quits politics permanently is the day the Hungarian left can truly begin to renew itself).