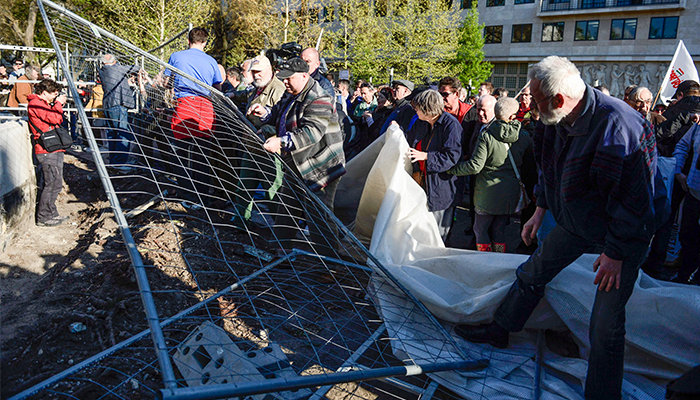 Protesters in Budapest demolish fences in response to prime minister Viktor Orban’s decision to proceed with construction of controversial memorial to victims of the 19 March 1944 invasion of Hungary by a few thousand German troops.

In March 2014 Orban wrote a letter to the president of the Hungarian Association of Jewish Groups (Mazsihisz) informing him that the government was postponing the memorial’s construction until after Easter (20 April).  He did so in response to outrage on the part of Hungary’s Jewish and German community over the decision to erect a memorial to the victims of the German invasion of 19 March 1944 in Freedom Square.  The memorial was to feature an eagle symbolizing Germany attacking the Archangel Gabriel symbolizing Hungarian innocence.

On Tuesday of this week, just two days after Fidesz’s landslide victory in Sunday’s general elections, and one day after the Jewish high holiday of Pesach, construction workers began construction of the memorial.  Protesters immediately gathered at the construction site to express their outrage at the government’s decision to resume construction without further discussion and debate.

The controversial memorial was ordered by government decree at the end of last year without consulting Hungary’s Jewish or German community.  Critics claim that the memorial is a historical lie intended to absolve the Hungarian government of responsibility in the tragic events that took place in the wake of the German occupation of Hungary of 19 March 1944.

Critics point out the subsequent deportation to Auschwitz of some 437,000 Hungarian Jews (the vast majority of which were gassed on arrival) was ordered by Hungarian authorities with the knowledge and approval of the Hungarian parliament, government, and the head of state, Admiral Miklos Horthy, and that German troops played little part in the rounding up, processing, and deportation of two-thirds of Hungary’s pre-war Jewish population.  They further point out that the memorial overlooks the fact that Hungary was Nazi Germany’s ally during the Second World War.

The decision to erect a memorial to the victims of the German invasion of March 1944 is part of the plan sanctioned by the national, conservative government of Viktor Orban to rewrite Hungary’s history so as to make it more palatable to the Hungarian people.  No fewer than four government financed historical research institutes have been established by the current Fidesz-KDNP government over the past four years.

One, the so-called Veritas Institute, is led by Hungarian revisionist historian Sandor Szakaly.  Earlier this year Szakaly sparked outrage when he referred to the 1941 deportation of some 16,000 Jews residing in Hungary (but unable to prove their citizenship, many having been denied passports by the Hungarian authorities) in the antiseptic language of the day as a “a police action against aliens”.

With the exception of a few survivors, those deported were massacred along with some 8,000 local Jews by units of the German SS at Kamianets-Podilskyi, Ukraine on 27-28 August 1941, in what historians generally consider to be the first mass murder of the Second World War.  Many such massacres would follow as SS units liquidated Jewish settlements in Ukraine, Poland, and Russia.

Speaking by phone with ATV on Tuesday, Mazsihisz managing director Gusztav Zoltai expressed his astonishment that construction of the controversial memorial had resumed without further consultation or discussion.  “As a Holocaust survivor I will do everything in my power to prevent this insult to my parents and our martyrs”.

On Wednesday Mazsihisz president Andras Heilser told Klubradio he was certain there had been a misunderstanding and that Prime Minister Viktor Orban would honor his promise to consult with Hungary’s Jewish community before resuming construction.

The following day the 78 year old Zoltai announced that he was resigning his position claiming that the stress was too much for him.

MSZP politician Pal Steiner announced on Wednesday that the party will initiate a referendum in Budapest’s 5th District, and urges the district council to retract its consent given for the construction of the monument. “We gathered here to declare that we do not want this statue because it is a lie, is based on a lie, and portrays a lie,” said Peter Niedermüller of the Democratic Coalition.

“This is not what we gathered from the Prime Minister’s letter in February. The government has not corresponded with us regarding the monument since then. The ball is in their court as they expressed that they would resume dialogue after Easter. We await the consultations.” said Peter Feldmajer, Vice President of Mazsihisz.  In response to the continued work on the structure, the organization will boycott all official Holocaust Memorial remembrance events planned for this anniversary year. “(Mazsihisz) must now show that they are independent of the government, and can hold their own remembrance ceremonies and events” said rabbi Zoltan Radnoti.

Protesters and activists are not impeding the workers, who continue to show up in the morning, rebuild the enclosures and resume construction. The activists are ready to disassemble the barricades daily if they have to, they stated.